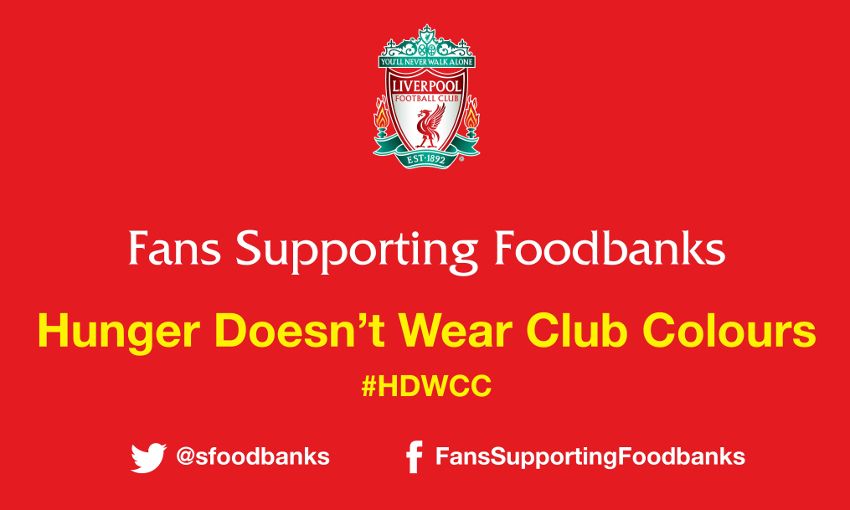 The initiative, conceived by local LFC and Everton FC supporters’ groups, is a joint collaboration which will see a mobile foodbank collection bank hosted both at Anfield and Goodison on matchdays, with the first collection taking place at Wednesday’s derby game.

Fans will be able to donate much needed food supplies before this game and every subsequent home game at the mobile collection point located in the Centenary car park.

The pilot scheme will run for the remaining home games in the 2015-16 season, including all Premier League and European matches, with all donations being equally split between two north Liverpool foodbanks - the St Andrews Community Network and Anfield Breckside Community Council (ABCC). Donations will then be distributed to residents in need in the north Liverpool community.

Fans will be able keep up to date with the scheme’s progress by following @LFC on Twitter, or by using the hashtag #HDWCC where they will find tweets detailing the total amount of food collected and also any specific items required for the next collection.

Ian Byrne, co-founder of Fans Supporting Foodbanks and Liverpool FC official Supporters’ Committee member said: “It is fantastic that the club is supporting this grassroots initiative.

“People in the Anfield and Breckfield area continue to be amongst the neediest people in our city. We would like to encourage fans to drop off any basic food items such as tinned fish, UHT milk or tinned vegetables to continue to help local people in crisis.”

David Kelly, co-founder of Fans Supporting Foodbanks and Everton Supporters’ Trust member, added: “We are delighted with the support we have received from Liverpool FC. It is great that the club is working alongside Liverpool and Everton supporters groups to deliver a grassroots initiative that will help those in need across the city. We hope that the fans will help support the foodbank too.”

Reds hoping for award success off the pitch