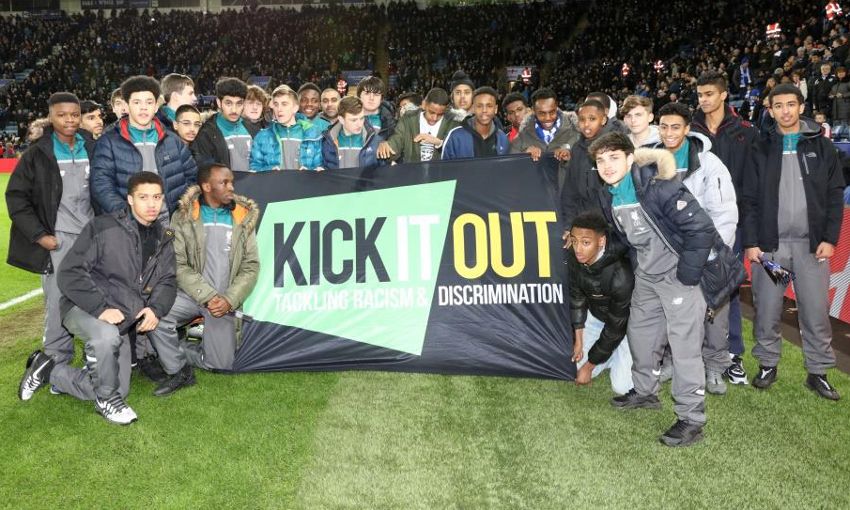 Participants from the Liverpool FC Foundation's Kicks programme recently took part in a 'Kick It Out' workshop at Leicester City.

The participants from both Liverpool and Leicester took part in a 30-minute workshop at the St Margaret’s Pastures Sports Centre.

The session offered an introduction to the issues surrounding stereotyping, in order to highlight the dangers of making assumptions about people and identifying their existing levels of prejudice.

It also provided participants with an opportunity for interaction amongst one another, with the activities helping to encourage participants to think about how they can develop their attitudes towards others, and empower them to take action to reduce bigotry in their own lives and society.

In addition to being invited to the match, four of the LFC Foundation youngsters took to the pitch as 'Kick It Out' banner bearers when both sets of teams walked out of the tunnel.

Furthermore, at half-time all participants were then given an opportunity to go pitchside to show unity in front of a sell-out crowd as they paraded the banner around the perimeter of the pitch.

Tony Cosgrove, Kicks programme lead, said: “LFC Foundation participants had an enjoyable experience. Leicester City and their community team must be commended for their fantastic hospitality.

“We hope to be able to work together again in the future to continue to promote the football engagement work we can offer to young people and build relationships with other clubs from around the country.”

Head of the Liverpool FC Foundation, Andrea Cooper, added: “Kicks is a fantastic programme which plays a key role in providing exciting opportunities for the youngsters involved with the LFC Foundation.

“We would also like to thank Leicester City Football Club for being so welcoming and providing fantastic hospitality in allowing those from the LFC Foundation to attend the first-team match at the King Power Stadium.”

Liverpool v Tottenham fixture dedicated to Kick It Out