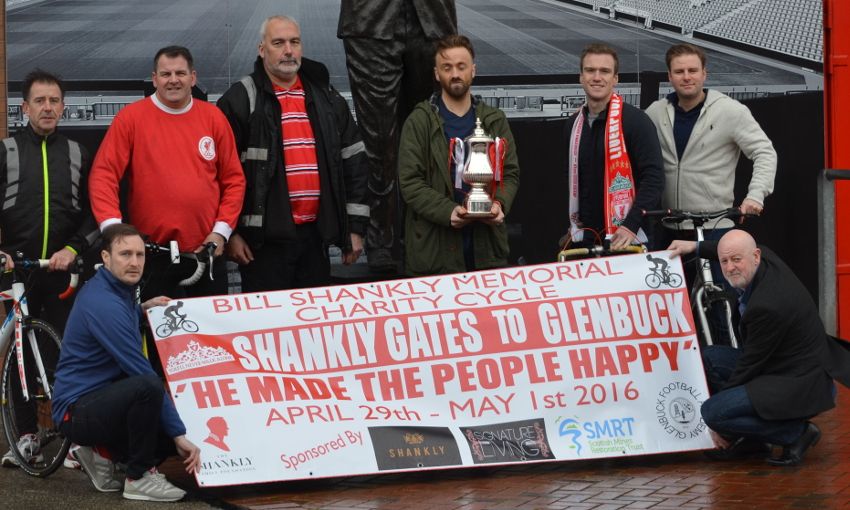 A cycling journey starting from the gates that honour Bill Shankly through to the birthplace of the man himself has been arranged to raise money for charities.

Shaun Moran and Tony Bonner are organising a 230-mile ride from the Shankly Gates at Anfield to Glenbuck in Scotland on April 29 to preserve the legacy of Bill Shankly.

They intend to arrive in the small Scottish mining village - where the former Liverpool manager was born in 1913 -  on May 1, just in time for a ceremony at the Shankly Memorial.

The money raised from the cycle will benefit the Shankly Family Foundation and the Glenbuck Football Academy, both of which promote grassroots football.

The event has been inspired by a similar fundraiser that occurred in 1997 as Moran's Grandad, Jack, walked from Anfield to Glenbuck at the age of 67, starting his journey with a lap around the pitch at half-time during a game against Manchester United.

He then arrived in time to witness Ron Yeats unveil the Shankly memorial monument and watch a football match between the Shankly Reds U15s and Glenbuck Cherry Pickers for the Bill Shankly Memorial Trophy.

This year, as part of the the 20th anniversary celebrations, the Shankly Family Foundation FC U14s will take on the Cherry Pickers to battle for the honour.

Throughout their trek, the cyclists will carry the trophy that was awarded almost two decades ago and hand it to the winning team before it goes on display at the Shankly Hotel in Liverpool.

If you would like to take part in the Shankly Gates to Glenbuck fundraising cycle, you can contact Tony on 07818 453630 or visit the Facebook page named ‘The Bill Shankly Memorial Cycle Ride’ for more details.