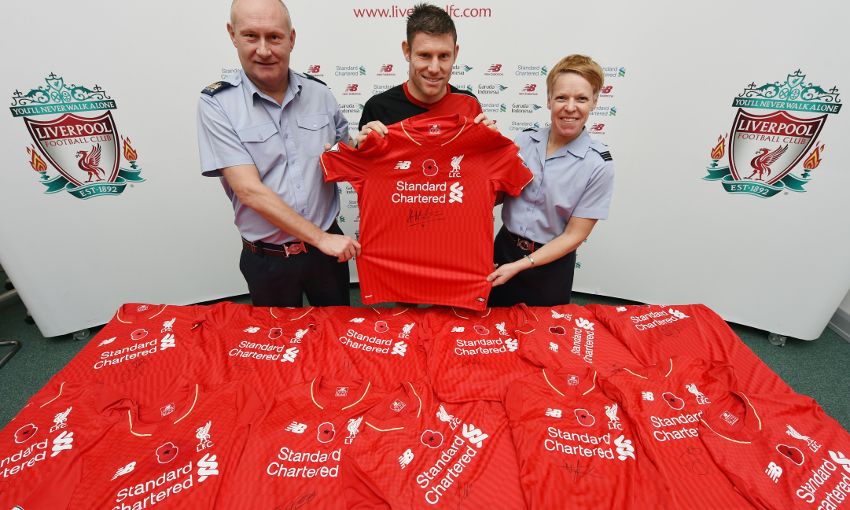 Your chance to win dinner with Jürgen Klopp

Liverpool vice-captain James Milner has made a special presentation for the Poppy Appeal at Melwood which will now help raise funds for the Royal British Legion.

The Reds midfielder handed over 31 signed poppy shirts that the team proudly wore during their fixture against Crystal Palace at Anfield on Sunday November 8.

All 31 shirts are now available to bid for on eBay and all monies raised will go towards providing essential care and support to serving members of the armed forces, veterans of all ages and their families.

Milner said: “It’s a real honour for the team to wear the poppy on our shirts.

“We are extremely thankful to all who serve in the armed forces for the amazing work that they do in serving our country. They’re real-life heroes and their hard work and bravery does not go unnoticed.”

Martin added: “On behalf of the Royal British Legion I would like to thank the club for the support they have given to the Poppy Appeal over the past seven years.

“The backing we receive is so important and enables us to raise vital funds which help support our work that we deliver to serving members of the armed forces and ex-personnel across the Merseyside region and beyond.

“Last year, the shirts donated from the Chelsea fixture raised a huge amount of money for the Poppy Appeal. It would be fantastic if we can achieve this figure again this year or, even better, beat it.”

Click here to bid on the LFC signed poppy jerseys via eBay.

Don't miss your chance to own a piece of LFC history