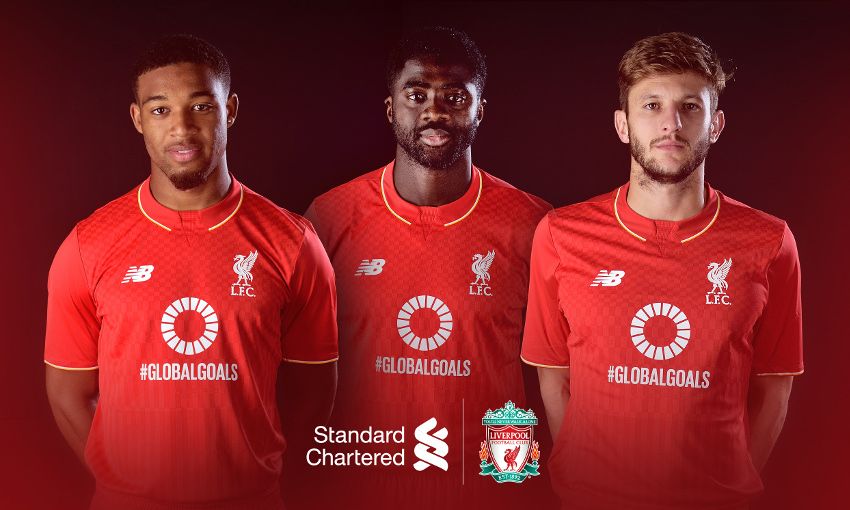 Liverpool Football Club and Standard Chartered will showcase their support for the Global Goals by swapping the club sponsor's crest for the initiative's logo on their jerseys during today's game with Aston Villa.

The campaign’s symbol will adorn the famous Red shirts for the Anfield clash to raise awareness of its aim to help end extreme poverty, fight inequality and injustice and tackle climate change by 2030.

On Friday, at the United Nations in New York, 193 world leaders adopted a series of 17 ambitious targets for sustainable development.

The ambition of the Global Goals campaign is to make the goals famous, with the aim of telling seven billion people in seven days.

LFC’s main sponsor, Standard Chartered, is a founding partner of the Global Goals and has combined with the club on a number of activities over recent weeks to raise awareness.

Along with this, Ibe and Toure joined Jordan Henderson and Adam Lallana in discussing some of their favourite music on Radio Everyone, while we also brought you the heart-warming story of young Reds fan Mekfah’s journey from Bangkok to club mascot in Malaysia.

Over the coming days, we’ll be giving away five of the match-worn LFC Global Goals jerseys, so stay logged on to Liverpoolfc.com for details after Saturday’s game.

For more information on the Global Goals, visit www.globalgoals.com.