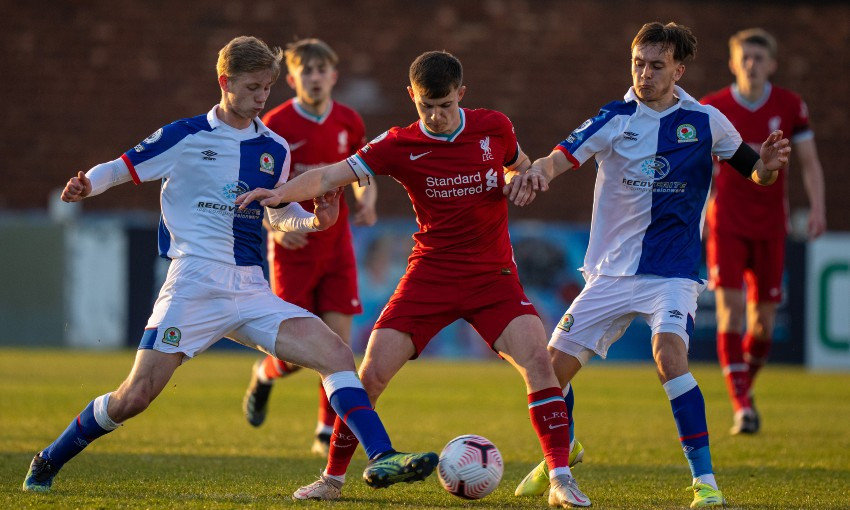 Second-half equalisers from Ben Woodburn and Leighton Clarkson saw Liverpool U23s share the spoils with Blackburn Rovers in a hard-fought 2-2 draw at Leyland on Monday evening.

Woodburn cancelled out a first-half opener from the hosts early in the second period before Clarkson fired home with just four minutes left to earn the young Reds a deserved point from the Premier League 2 contest.

It was the home side who started the game brighter with Liam Hughes much the busier goalkeeper early on.

Clarkson was caught in possession near his own box and Hughes produced a fine save to prevent the opener, gathering the ball off a touch from his own midfielder.

The referee deemed that a back-pass and the Northern Irish 'keeper was quickly off his line to block out the indirect free-kick from six yards out.

The young Reds were again indebted to Hughes when Isaac Whitehall met a cross from the right on the volley, the 'keeper in the right place to push it away to safety with 20 minutes gone.

Luis Longstaff then created space in front of goal after combining cleverly with Woodburn but the ball wouldn’t sit down and he couldn’t get a solid connection on his effort.

Blackburn took the lead just after the half-hour mark, making the most of a short corner routine. The ball was played to Jake Garrett on the left touchline and his cross was turned home by Whitehall, who opened out his body and diverted the ball past Hughes.

Barry Lewtas' team started the second period in much livelier fashion and were level within four minutes of the restart. Hardy pinched the ball from a defender on the right wing and crossed superbly for the advancing Woodburn, who slotted past Antonis Stergiakis.

The home side weren’t going to give up the initiative lightly, though, and they regained the lead 20 minutes into the half.

There seemed little danger at a narrow angle but they worked it well to Whitehall in front of goal and he hammered home his second.

Liverpool responded again as Clarkson found Owen Beck down the left with a great ball, setting up a chance for Hardy which the 'keeper blocked, before Beck himself struck low against Stergiakis' legs after a pass missed out everyone in the middle.

Paul Glatzel returned from injury with 20 minutes left and the striker almost found Hardy with a dangerous cross as the game began to become stretched.

A terrific Clarkson pass again set Beck away on the left and his centre was agonisingly missed by both Glatzel and Fidel O’Rourke before the young Reds were convinced they had a penalty for handball, only for the referee to wave their appeals away.

The visitors kept coming forward, though, and a good spell of pressure saw the ball eventually fed to Clarkson on the right of the box and he fired unerringly into the corner to secure a point.