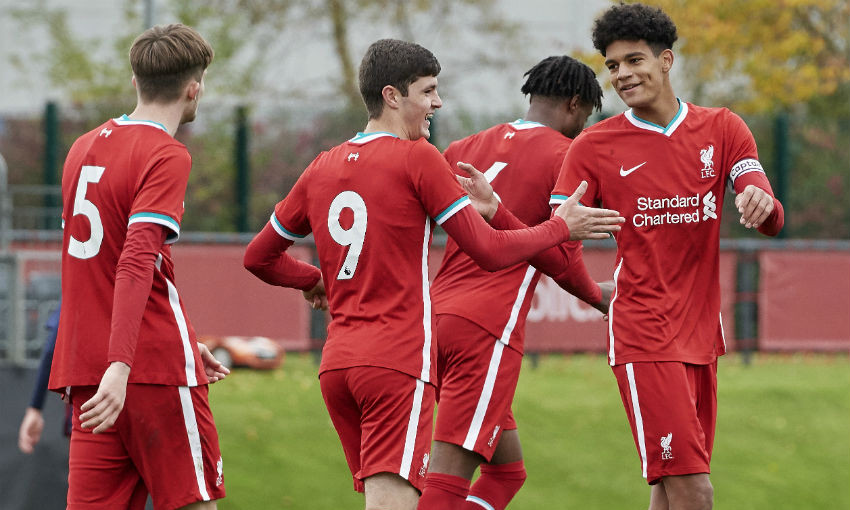 Liverpool U18s produced a fine display on Saturday morning to defeat Everton 4-0 in the mini-derby at Finch Farm.

Coach Marc Bridge-Wilkinson was able to welcome back Tyler Morton, Lee Jonas and Luca Stephenson to the starting line-up, and the Reds started brightly.

A nice exchange of passes brought the ball to James Balagizi and the midfielder’s powerful shot left the crossbar shaking.

The Reds took the lead just after the quarter-hour mark when Everton failed to properly clear a corner. The ball was recycled to Melkamu Frauendorf, who produced a wonderful turn and finish for the German youth international’s first goal for the club.

Everton looked to hit straight back but Tom Cannon screwed his shot well wide, and within a minute Liverpool had stretched their advantage.

There seemed little danger as the ball came to Layton Stewart out on the left, but his strong cross-shot found its way into the back of the net via a deflection from Reece Welch.

Everton left-back Thierry Small had a good battle all half with the very tidy Sean Wilson on the Reds’ right and the Blues’ player sent over a good cross for captain Sean McAllister, but Jakub Ojrzynski gathered his header easily.

The home side threatened again with 10 minutes of the half remaining, Cannon heading down a cross from the right but Lewis Dobbin scuffed his shot.

The Reds finished the half on top with Balagizi playing in Frauendorf, who was denied twice by Zan-Luk Leban before Stewart’s low shot brought another sprawling save from the Blues ‘keeper.

But the last five minutes of the half still brought another two goals for the visitors.

First, Morton’s fine corner to the back post was met on the volley by Jonas and his effort floated across goal and into the far corner.

And just before the whistle, Max Woltman was rewarded for excellent recent form, finishing off some good build-up work from Wilson to make it 4-0 at the break.

The second period saw the Reds threaten first again, Stewart escaping a lunging tackle down the left and only the ’keeper’s fingertips took his cross away from the advancing Frauendorf.

Everton were looking for a way back into the game and almost got it through Dobbin’s low shot, but Ojrzynski tipped it onto the post.

Wilson sent a low skimmer just past the post, while Stewart escaped his marker to threaten in behind a couple of times.

Commitment and strong tackles continued but the Reds were well in control and saw out the game comfortably to follow up last year’s 6-1 win at the same venue.