Leighton Clarkson, Ben Woodburn, Jack Bearne (two) and Luis Longstaff were all on target as Barry Lewtas’ team produced a largely commanding display against their rivals at Leigh Sports Village.

The contest was marred in the second half by red cards on either side; Clarkson was dismissed for a lunging tackle and Shola Shoretire for his subsequent reaction.

But it was nevertheless a fine evening’s work for the young Reds, who have taken six points from a possible nine to kick off the PL2 campaign. 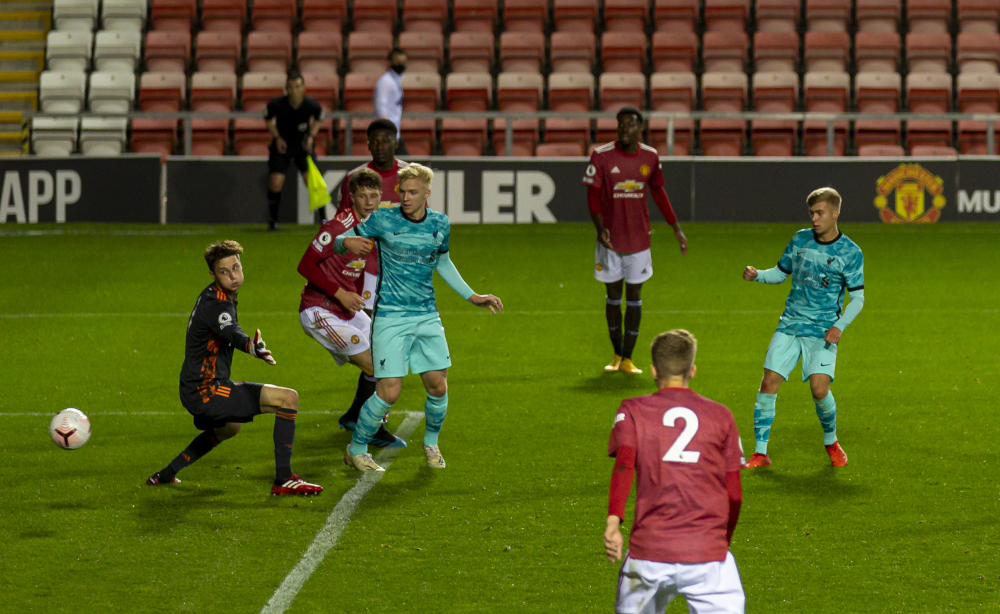 Liverpool set about their strategy of rapid, high pressing with relish and its success meant they established near-total dominance of the first half.

Initially stationed on the left flank, Liam Millar offered the most productive outlet early on and when his seventh-minute cross was cleared to Jake Cain, he teed up Woodburn and his side-footer back across goal went wide.

But they would not have to wait much longer for a breakthrough.

Clarkson and Longstaff combined to steal possession in the United half and the former deftly swapped passes with Bearne on the left, collected the return as he continued his run into the box and slotted into the net. 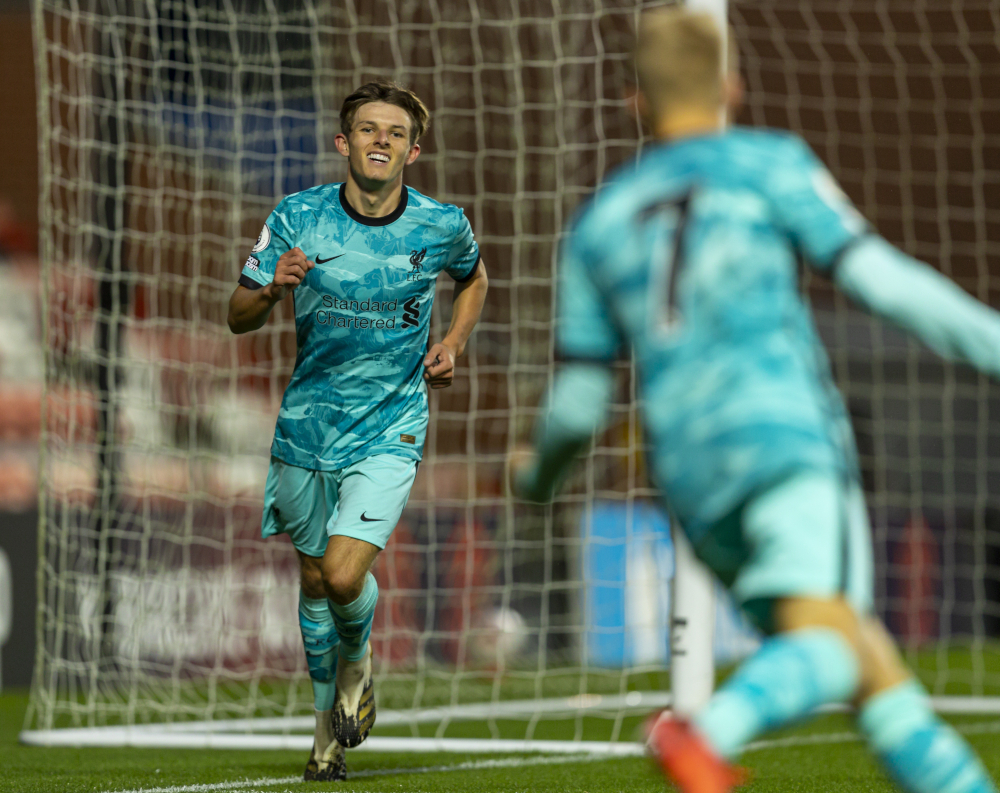 Woodburn’s influence on the contest grew with each minute and he would have claimed an assist when he made ground on the byline and picked out Cain, but the finish swerved off target.

Instead, the Wales midfielder doubled the lead himself on 22 minutes.

Cain was the architect, though, winning the ball in the left channel and spotting the supporting central run of Woodburn, whose strike deflected off Di’Shon Bernard, nudged the post and landed over the line. 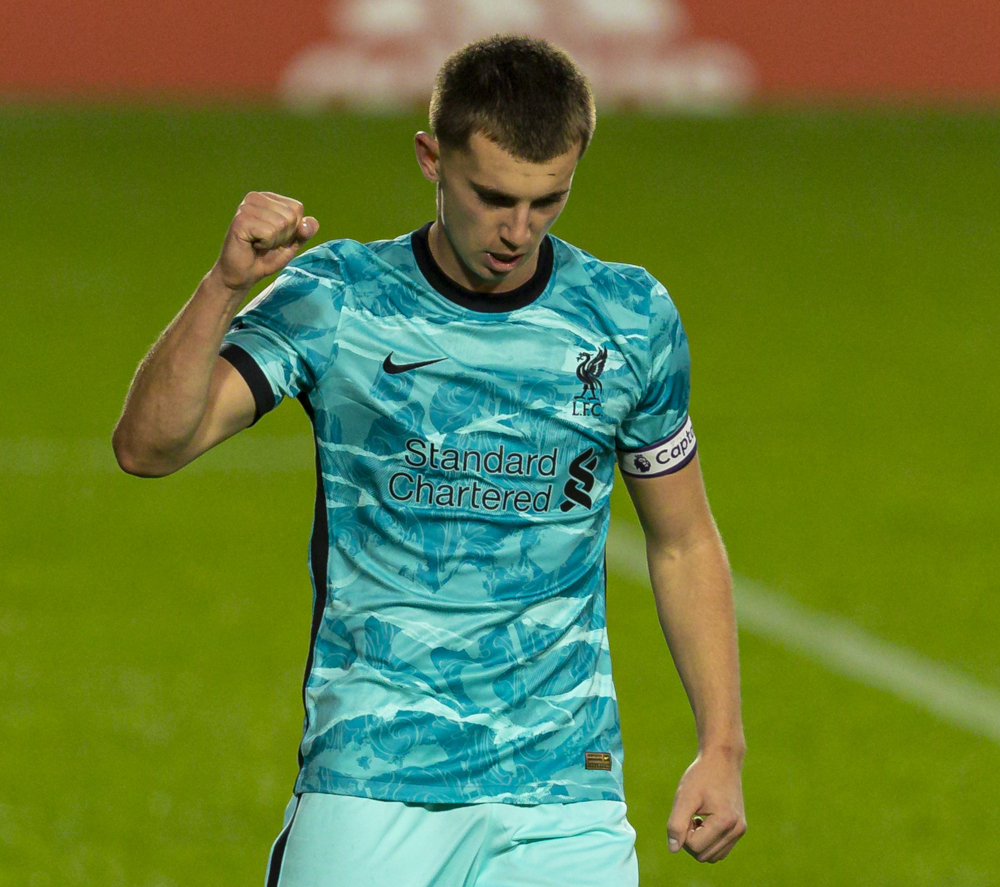 Woodburn was close with a 25-yard drive soon after, and Liverpool’s third of the night came from Bearne with just half an hour played.

Millar again launched the threat with an effective surge down the left and his delivery into the area was kept alive by Woodburn, who rolled the ball back for Bearne to calmly guide into the opposite corner.

United reduced the arrears with 35 on the clock. From a free-kick at a narrow angle on the left, goalkeeper Ben Winterbottom’s attempt to clear struck Tom Clayton and fell for Anthony Elanga to convert.

But the young Reds struck again right on half-time to take a remarkable 4-1 scoreline into the break.

Longstaff’s vision and technique created the goal, the No.9 whipping in a superb low cross that was clinically dispatched from close range by Bearne for his second.

Liverpool showed no sign of letting up at the outset of the second half and could have netted within a minute of the restart.

Millar dribbled through two defenders as he moved in from the left edge of the box and would have backed himself to find the far corner – only to put too much on it and fire over.

There was no mistake from Longstaff in the 50th minute, however.

United goalkeeper Ondrej Mastny sent a kick straight to the Reds forward just outside the area and Longstaff was perfectly composed as he shaped up his strike and curled it home past the recovering bodies. 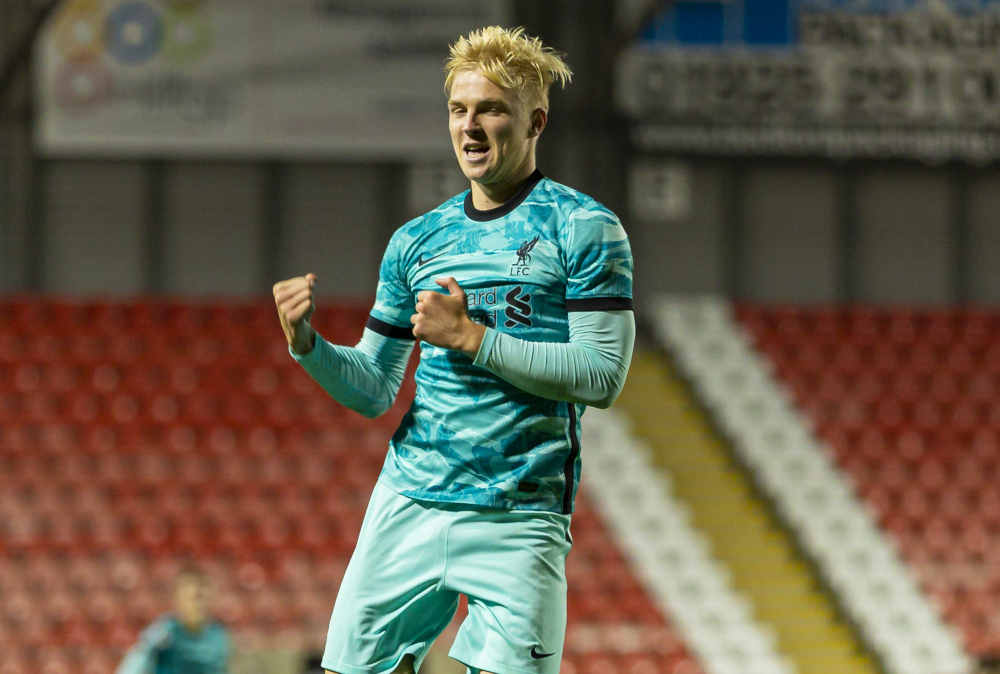 As the hour mark neared, Winterbottom made an outstanding save at full stretch to thwart Elanga, who darted in from the left wing and whipped an effort that was destined to nestle in the opposite corner.

An increasing tension in the proceedings then boiled over as Clarkson was shown a red card for a poorly-executed tackle on Bernard. Shoretire was simultaneously sent off for shoving Clarkson in the aftermath.

Once things had calmed down, Woodburn had the chance to score a sixth, having broken the offside trap to collect Millar’s defence-splitting pass, yet couldn’t prod over Mastny one-on-one.

It was United instead who had the final say, as Hannibal clipped past Winterbottom from 20 yards out and Charlie McCann blasted in late on, but the points and the night were emphatically Liverpool’s.