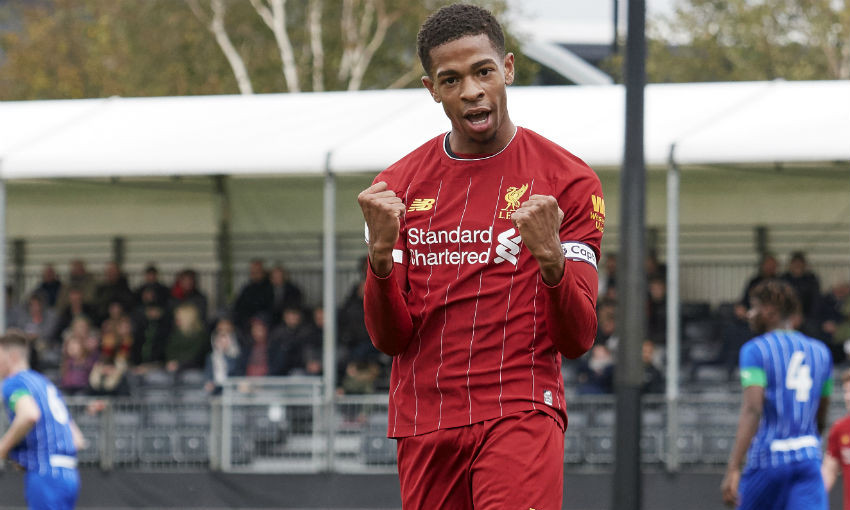 Elijah Dixon-Bonner feels so at home as a Liverpool player that he believes he's already turning into a Scouser.

The versatile midfielder grew up supporting the Reds and joined the club's Academy set-up in 2015 when he arrived from Arsenal.

It's been a successful move for the 19-year-old and was further underlined when he claimed a senior appearance as he featured as a late substitute in the FA Cup tie with Shrewsbury Town at Anfield.

"Me and my dad are both Liverpool fans," Dixon-Bonner tells Liverpoolfc.com. "He's a really big Liverpool fan, so technically I had no choice from being a baby! I love the club. It's a great club, great history, great fans. I enjoy every moment of it.

"At the start, it was really, really different. Being away from my family, the famous Scouse accent, I struggled to get a hold of. Once I settled in, I loved it.

"Really lovely people, the fans are great, the city is great. I feel like I'm turning into a bit of a Scouser. I haven't got the accent but I don't mind the meal Scouse.

"I love the city, it's got great history, great people and great fans. I always like to thank them for welcoming me as a young kid. When I go onto the pitch, I give my all for them."

Read on below for more of our chat with Dixon-Bonner in the latest edition of our Meet the Academy series... 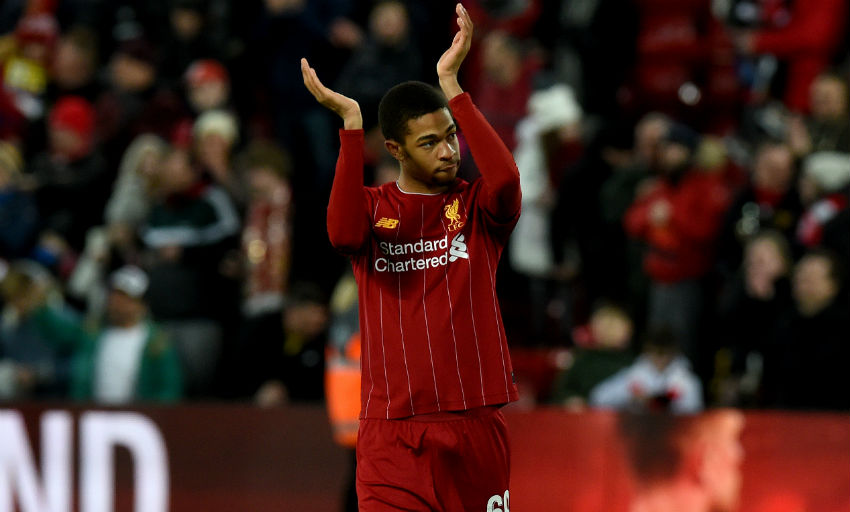 We'll start with your unfortunate injury sustained in February. Just how did it happen and how's the recovery going?

It was against Huddersfield and I was backtracking to go up for a header. Two guys have come behind me – my teammate and one of their players – and have collided, which has led to me tearing a ligament in my knee. That led to a lot of discomfort obviously and I had to have two injections in my knee because I'd damaged my MCL. I was in a lot of pain but I just got straight down to business with the rehab, doing my gym work properly, working really hard with the members of staff in the physio department. Even with this crazy stuff that's going on right now, we still communicate regularly. We did a lot of video sessions, checking up on me, doing gym sessions. Rehab is going well. By the time this is all over, I'll be back with the team, which is a positive.

It was really bad timing because you were having such a good season...

Yeah, I was really enjoying this season. I thought I kicked on and churned out some really good performances, I was really enjoying it. But injuries are part of the game, so you've got to kind of take the good with the bad. It was obviously unfortunate but I won't allow that to hold me back in the future and I'm looking to kick on and progress.

I know you were tasked with getting in the box more and scoring goals this season. How do you think you've fared with that?

Do you want to talk us through the process of that? Every player wants to add more goals to their game but just how do you do it?

You watch a lot of your games but it's just as simple as getting into the box and believing in yourself. Not even so much in the box, you can obviously score from outside the box. So it's just believing in yourself. I know that I'm more than capable of scoring goals and it's just something you need to practise. Then you start to get good at it and you just can't stop practising. You've just got to keep on running, and that's what I've done. 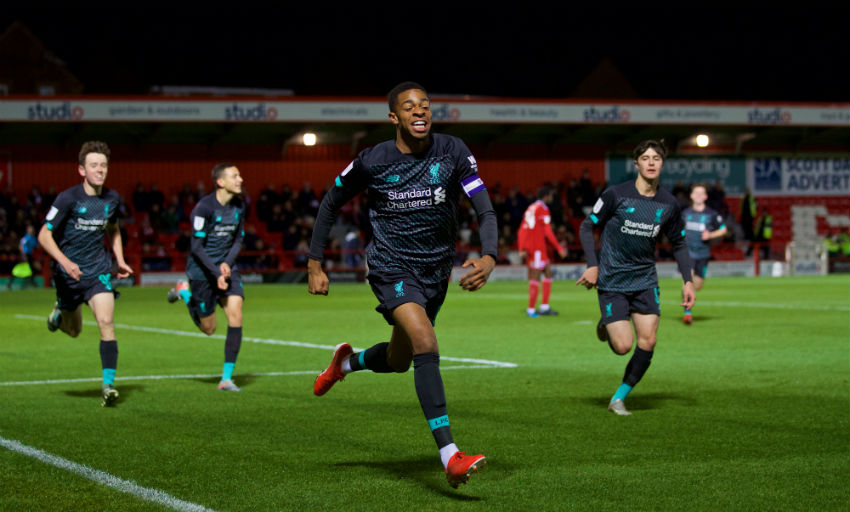 At first-team level we see how they can do pretty much all the roles in central midfield. Are they players you look to learn from?

I definitely learn a lot from them and [others] in the first team. Even training with them and stuff like that, you learn a lot. But at the same time, I tend to just learn from myself a lot. I just analyse my game and see where I can improve. It's just repetition. Honestly, a lot of repetition, a lot of practice and training. You then tend to see the results on matchday.

And you also had a manager at U18s level who was also quite good at getting into the box and scoring goals in Steven Gerrard...

Definitely – not a bad example to have in front of you! I played a slightly different role in the U18s with Steven but it just goes to show I am quite a diverse player, I can play different positions in midfield. But he taught me a lot about the game. I definitely took a lot from that guy and I have loads of respect for him.

Just how important is it to be versatile at a young age?

You're looking in the Premier League, there's so many different types of midfielders. For me personally, I like to think of myself as a player that can do a lot of different things. I didn't want to nullify myself to just one position, I wanted to be able to do everything to help the team in many different ways. Obviously I'm not the finished product but I'm definitely working hard so that my game is expandable and I can be a massive help to the team. 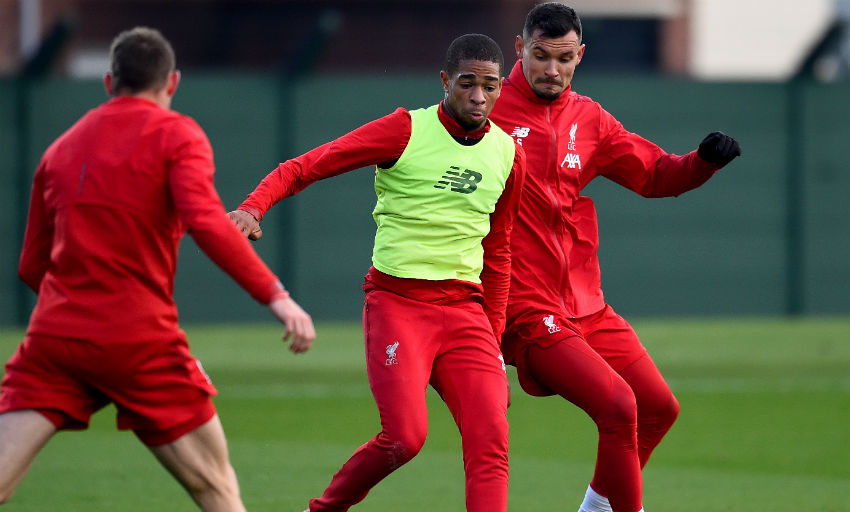 What has it been like for you at Melwood with the first team when you've been up there?

It's a really, really good test. Firstly, they're really nice guys to be around. They give you bits of advice and help you with different bits of the game that will help you in the long run. When you go up there, you don't really want to show that you're a youngster. You want to be able to fit in and hold your own. I just tend to play my way. Honestly, I don't really think of it too much. I don't put any added pressure on that situation. I'm quite a laidback person, so when I go into that set-up I just tend to play my own game and treat it like another day of football.

You've also captained the U23s a few times and Neil Critchley said that was a sign of your maturity. Do you enjoy that leadership role?

Definitely. That's part of being a young man, you've got to mature. On leadership, you don't have to have the armband on to lead. You just tend to help where you can. There's more than one leader in that U23s side, which is a good thing about the side. I have matured but I just have fun. I just be myself and have fun. I don't really put too much thought into it.