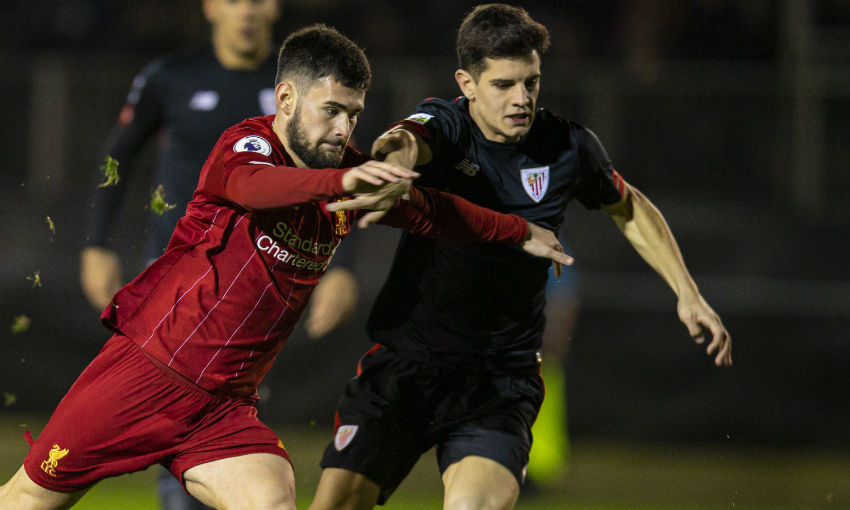 Two first-half goals from Inigo Baque at the Kirkby Academy saw the Spanish side take home the three points from the group-stage encounter.

Jack Bearne's 82nd-minute strike pulled one back for the young Reds and progression to the knockout stages of the competition can still be secured with a win at Wolverhampton Wanderers later this month in their final Group E fixture.

An early chance fell for Neil Critchley's charges before the visitors took control of the affair, with the newly-arrived Joe Hardy striking the side-netting inside two minutes after Leighton Clarkson's neat pass.

Liverpool goalkeeper Ben Winterbottom denied the Bilbao outfit on three separate occasions prior to the eventual opener. The pick of the saves was his first when he made himself big to deny Gorka Guruzeta in a one-on-one situation.

But the deadlock was broken in the 20th minute in circumstances Liverpool would feel were unfortunate.

Tony Gallacher did well on the cover to stop Andoni Tascon when through on goal. However, the ball ricocheted into the path of Baque, who made no mistake in front of goal.

Then, a quarter of an hour later, a high press saw Athletic Club pinch possession deep inside Liverpool's half of the pitch. Guruzeta drove into the area as the move resulted in Baque grabbing his second by poking in from close range.

The hosts searched hard for a route back into the game all throughout the second half, and Bearne delivered it to set up a tense finale. The No.7 fancied his chances from distance as his shot took a deflection and went beyond the goalkeeper.

Bearne, Tom Hill and substitute Layton Stewart all went close to levelling in the closing stages but the game ended in frustration as Athletic held on to the victory.