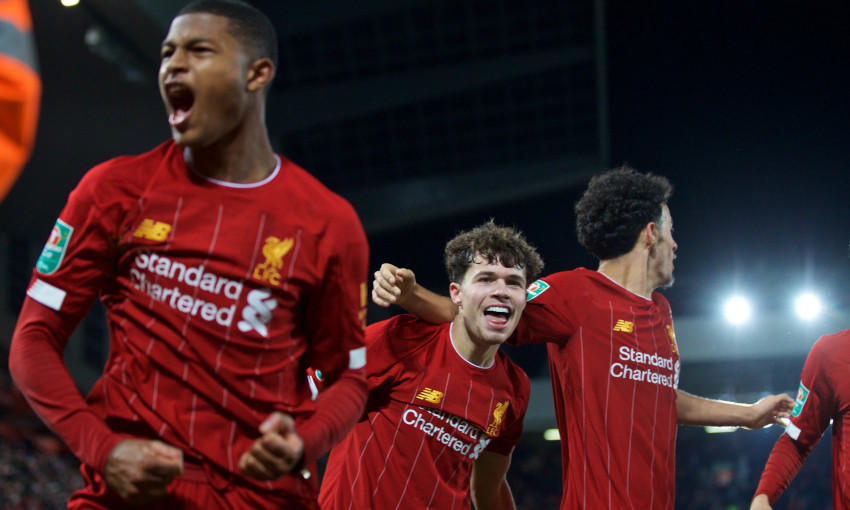 In the 95th minute of last month’s Carabao Cup tie with Arsenal at Anfield, the right-back found himself ignoring the onset of cramp to celebrate in front of a jubilant Kop.

Seconds earlier, the 18-year-old had exhibited his game intelligence to find a pocket of space on the right touchline and pick out a teammate in the middle.

Divock Origi’s volleyed finish from Williams’ industrious cross was the 10th goal of that thrilling night and the precursor for a penalty shootout that the Reds would win 5-4 to progress to the quarter-finals.

“I turned straight to the Kop and I was trying to soak it all in, all the atmosphere,” recalls Williams on the latest episode of LFCTV’s The Academy.

“I turned around and they [the players] were all coming to me. It obviously meant something to the players. It was a great feeling.

“There’s only one way to sum it up really: a dream come true. It was a special night for me and my family.

“Not many footballers get to say they made their debut for Liverpool at Anfield. Obviously it was a big day for me and I enjoyed every minute of it.”

It was a proud evening for the Academy as fellow graduates Curtis Jones and Caoimhin Kelleher proved Liverpool’s heroes in the shootout.

After Kelleher made an excellent save to keep out Dani Ceballos’ effort, Jones had the chance to clinch victory for the Reds and calmly swept in his kick.

And amid the joy that followed, the role played by the coaches in Kirkby in bringing Williams and his teammates to that point in their career was at the forefront of his mind.

“The whole Academy,” he says. “The likes of Alex Inglethorpe, Neil Critchley, Barry Lewtas, Steve Heighway, Rob Jones – there are lots of managers who have helped me along the way and built my confidence to get me to that stage.

“They have all helped me come a long way since I was seven or eight years old. They are the people who got me to where I was that night.”

Watch: More from Williams on The Academy

The level-headed Williams admits to having watched the dramatic conclusion to the goalfest with the Gunners “hundreds of times” afterwards.

But, now it’s done and dusted, the Wales youth international doesn’t want to dwell on that first senior appearance – because he knows he can’t afford to.

“You get congratulations but nothing has changed just because I have made my debut now,” Williams, who scored twice for his country’s U19s on Saturday, continues.

“But when I am with the U23s, nothing changes – it’s the same attitude and same mentality and I’ve just got to keep fighting for more opportunities.”

'Neco was incredible - our most dangerous attacker from full-back!'