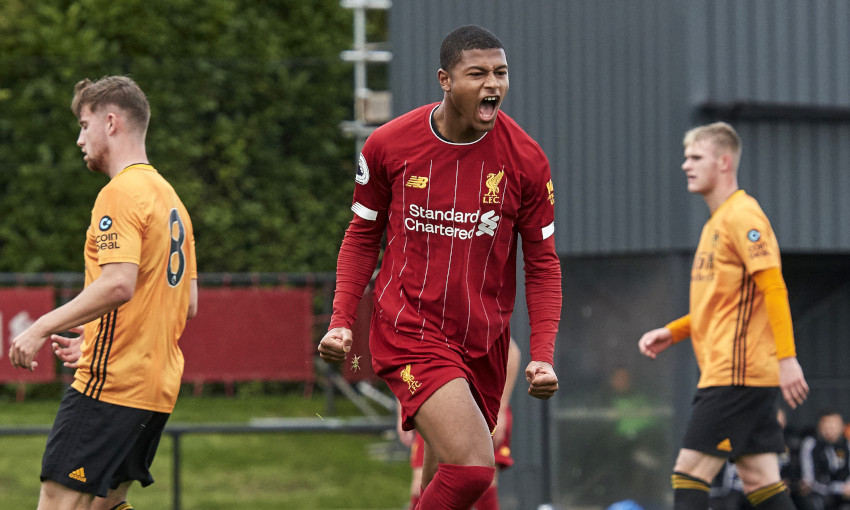 Rhian Brewster scored twice as Liverpool U23s edged an end-to-end game with Wolverhampton Wanderers 4-3 at the Academy on Sunday.

A fine strike by Herbie Kane and a deflected Leighton Clarkson header added to Brewster’s double and ultimately proved just enough to take all three points.

The result – the second win in Premier League 2 for Neil Critchley’s side this season – lifted the young Reds up to mid-table in the division.

Liverpool made an energetic start in Kirkby and Brewster had the ball in the net on four minutes, though he was judged to have impeded the goalkeeper as he did so.

Wolves rallied, though, and were steadily taking control of the contest until the home side produced a moment of quality to go in front on 19 minutes.

Curtis Jones found a pocket of space to collect Neco Williams’ pass in a central area and fired away a lot shot that was pushed out by Andreas Sondergaard.

But Liverpool recycled the ball on the left and Jones completed an intricate one-two with Elijah Dixon-Bonner and squared for Brewster, who swept a perfect finish into the top corner.

Wolves should have levelled immediately.

A poor touch by Sepp van den Berg in his own territory allowed Benny Ashley-Seal to run through one-on-one, with Ben Winterbottom somehow blocking his close-range shot.

Jones and Luis Longstaff were a threat practically every time they received possession and some excellent footwork by the former on the left byline preceded a lofted cross that Williams met at the opposite post with a header wide.

Next, a dart into the opposition box by Kane saw the midfielder present Brewster with a similar chance to his goal.

The circumstances meant the No.9 had to awkwardly prod his strike on this occasion, however, and Raphael Nya recovered to divert the ball over the bar.

But there were goals at either end before the break.

Morgan Boyes was somewhat harshly penalised for a nudge on Ashley-Seal inside the area and the Wolves striker stepped up to send Winterbottom the wrong way from 12 yards.

Liverpool got back in front instantly. A contested ball ran loose at the edge of the Wolves box and Kane arrived to thud a low strike underneath Sondergaard.

Wolves had the better of the opportunities during a strong start to the second half, with Winterbottom called into action on several occasions.

The Reds were initially unable to find their rhythm of the opening 45 minutes and Critchley opted for a change on the hour, Clarkson replacing Dixon-Bonner.

And soon they had their two-goal cushion back.

Longstaff maximised the space afforded to him on the right flank and curled in an inviting cross that Brewster met with a flicked header past the ‘keeper for 3-1.

Critchley’s charges looked to have put the game beyond Wolves with little over a quarter of an hour remaining as another delivery from the right – this one from the influential Jones – ended up in the net via Clarkson and a deflection.

But the away team refused to give it up and threatened an unlikely comeback as Ashley-Seal quickly struck back and then substitute Boubacar Hanne netted in the 89th minute after a scramble in the area.

The Reds held on in the closing moments, though, and secured a hard-earned victory.