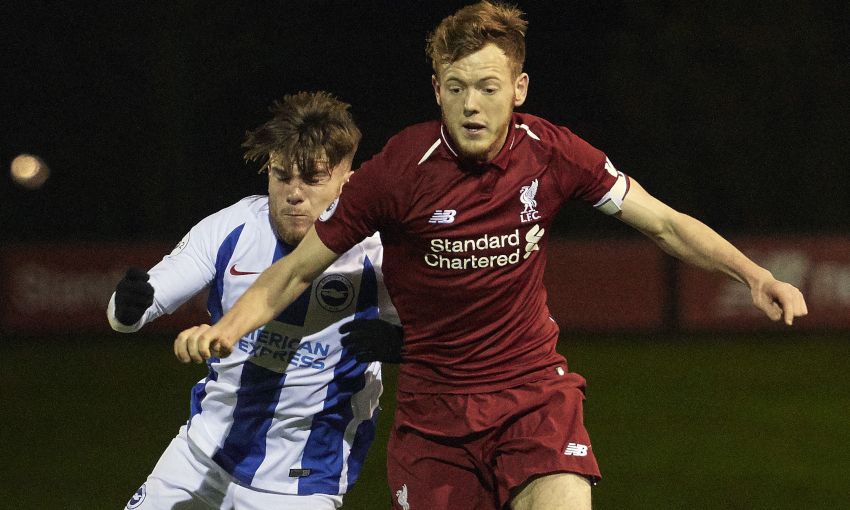 'He's the type of character you always want in your team'

Liverpool U23s had to settle for a 1-1 draw with Brighton and Hove Albion at the Academy despite leading for the majority of the game with 10 men.

Rafael Camacho’s clinical early finish opened the scoring in a Premier League 2 clash punctuated by the harsh dismissal of the Reds’ Ki-Jana Hoever midway through the first half.

Neil Critchley’s side dug deep to keep Brighton out for long periods but their pressure told four minutes from time, when Haydon Roberts headed home to snatch a point.

Curtis Jones warned the visitors of Liverpool’s intentions with a dipping, seventh-minute drive from the left edge of the area that Brighton goalkeeper Hugo Keto carefully touched over the crossbar.

But the hosts clinched the breakthrough soon after.

The away team squandered possession in their own territory and Camacho delivered the maximum punishment when the ball came to him in a central position.

The Portugal youth international, who made his senior debut for the club a week ago, settled himself 20 yards out and threaded a precise left-footer into the bottom right corner for 1-0. 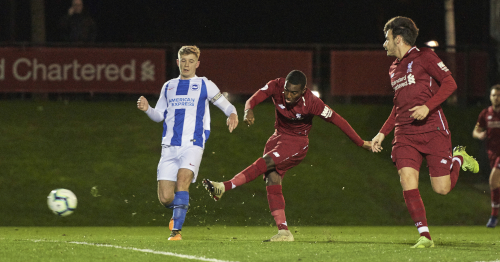 Brighton threatened a rapid response on the quarter-hour, with the young Reds relieved to see a neat passing routine end with Aaron Connolly’s curler going wide of the post.

Liverpool’s momentum was unexpectedly halted when Hoever was sent off in the 21st minute.

The defender was guilty of a foul on Connolly at the edge of the box as the forward ran through but with George Johnston still blocking his route to goal, the home team were aggrieved by the straight red card shown by the referee.

Not that they allowed the disappointment to influence their performance; Pedro Chirivella sent strikes at the ‘keeper and narrowly wide respectively, either side of a Max Sanders hit well saved by Caoimhin Kelleher.

And Camacho powered a free-kick, won when the Liverpool No.10 was clumsily felled by Warren O’Hora, just off target before the break.

Brighton introduced Viktor Gyokeres at the outset of the second half and the substitute might have claimed an equaliser within 60 seconds of the action’s resumption.

Having cut inside and clipped a finish from right to left, though, he watched the ball spin wide.

Camacho went even closer with a similar piece of individual skill at the other end on 48 minutes. The 18-year-old scooped Adam Lewis’ pass into the area, turned past Roberts and cracked a curler off the upright.

Jones drew a decent save from Keto after a clever solo dribble as the game continued to flow evenly despite Liverpool’s numerical deficit.

As the minutes ticked away, O’Hora fired over the crossbar when a Brighton corner from the right caused a scramble and the ball fell kindly.

And just when it looked as though Critchley’s charges would successfully preserve their advantage, Roberts met a superb Alex Cochrane cross from the left wing with a rising header beyond the reach of Kelleher to salvage a draw.