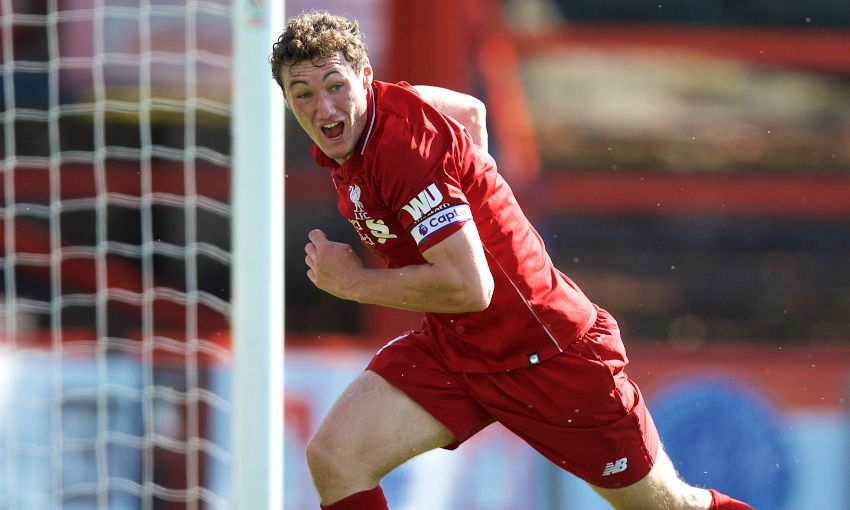 Matty Virtue scored twice as Liverpool U23s got back to winning ways by beating Chelsea 3-1 in Aldershot on Saturday.

In a Premier League 2 precursor to the senior sides’ meeting later in the day, Rafael Camacho had put the young Reds in front within two minutes before creating the second goal midway through the first half.

The Blues mounted significant pressure after the interval and halved their arrears through Josh Grant but Virtue’s second of the afternoon sealed the points for Liverpool.

Neil Critchley asked for a response from his players after last week’s 4-0 defeat by Arsenal and he could not have wished for better in the first half.

As it was, they produced the opener in the second minute.

Millar again found space in a central area and threaded a perfectly-weighted pass in between defenders to Camacho off the left – and the Portugal youth international clinically lifted his finish into the roof of the net.

Perhaps influenced by the speed of the first goal, the game was open and chances were being created at both ends, Callum Hudson-Odoi going close with a curler from the left edge of the box which Kamil Grabara stopped well.

More of the action was in the Blues’ territory, however, and it was no surprise when Virtue doubled Liverpool’s lead on 23 minutes.

The Reds captain owed much to Camacho, whose rapid turn past Ampadu in the left channel preceded a cross to the near post that Virtue tapped in.

Opportunities kept coming in an entertaining contest, Curtis Jones threatening with a dipping strike from 20 yards and Hudson-Odoi consistently causing problems at the other end.

The old cliché of it being a game of two halves must have rarely been truer than this match.

Chelsea dominated the second half from its first kick and halved their deficit within two minutes of the restart.

After a short corner on the right hand side, Hudson-Odoi crossed low into the Liverpool area, where Grant met the delivery with an assured knock into the bottom left corner.

The hosts went on to create a series of promising chances, most falling to Redan – one skewed wide to the right from Juan Castillo’s brilliant cross and another scuffed off target to the left having sped through one-on-one.

Lewis’ corner-kick from the right was delivered into a dangerous central position, where Virtue showed strength to hold off his marker physically and accuracy to direct the ball beyond the goalkeeper.

The Reds still needed Grabara to make an excellent double save. The Pole punched out a 20-yard hit from Conor Gallagher and quickly rose to his feet to deny Hudson-Odoi on the follow-up.

Chances continued to flow, with Chelsea refusing to give up the game, but Liverpool had done enough to secure their second win of the Premier League 2 season.