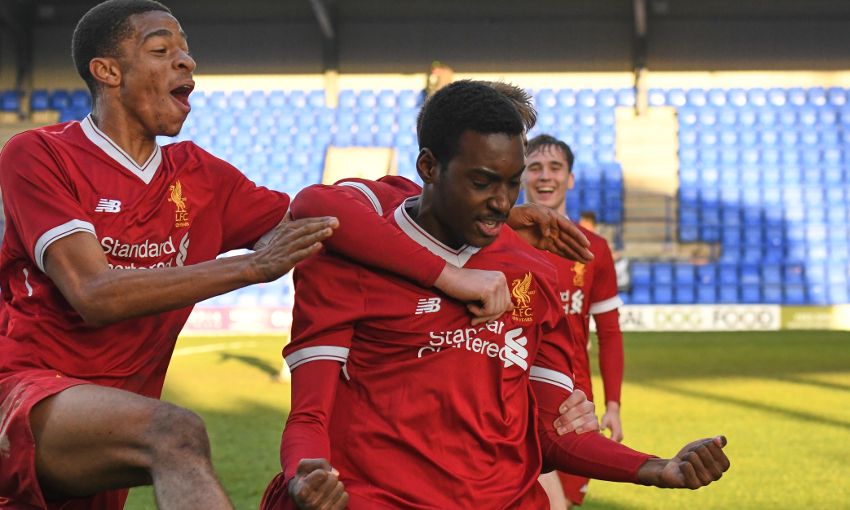 Rafael Camacho was delighted to score a fantastic goal that helped Liverpool U19s reach the quarter-finals of the UEFA Youth League on Wednesday.

Captain Ben Woodburn headed the opener against Manchester United, before the Portugal youth international wrapped up the 2-0 victory with a stunning strike after coming off the bench.

With Nicky Butt’s side pressing hard for an equaliser in the last-16 tie, the 17-year-old curled an unstoppable effort into the far corner of the net to set up a meeting with Manchester City for Steven Gerrard’s charges.

Describing the emotions in the dressing room post-match, Camacho told Liverpoolfc.com: “It’s always good when we beat Manchester United because we have such a big rivalry with them, so it’s a wonderful feeling after the game to beat them in such a big competition.

“It’s great to reach the quarter-finals and I was very happy to score the second goal and calm the game down for us.”

LFCTV GO: Watch the highlights from the 2-0 win

Camacho appeared as a replacement for the impressive Bobby Adekanye, who had to leave the field after suffering from cramp.

Reflecting on his decisive and sublime strike, the forward insisted he was just pleased to help the team.

“I just came on and tried to keep it simple, but obviously try to do something on the counter-attack [for us] but I didn’t think I would go on and score a goal like that,” he added.

“It was a good time to score because United were coming back into the game. We were only 1-0 up so to get that second goal calmed everyone down.”

The young Reds will now face a trip to City for what is set to be a fascinating quarter-final, and Camacho expects Gerrard’s side to approach the tie with confidence.

He added: “We know that City won on penalties but we have a brilliant team as well who work hard, and we feel we can go far in this tournament.”