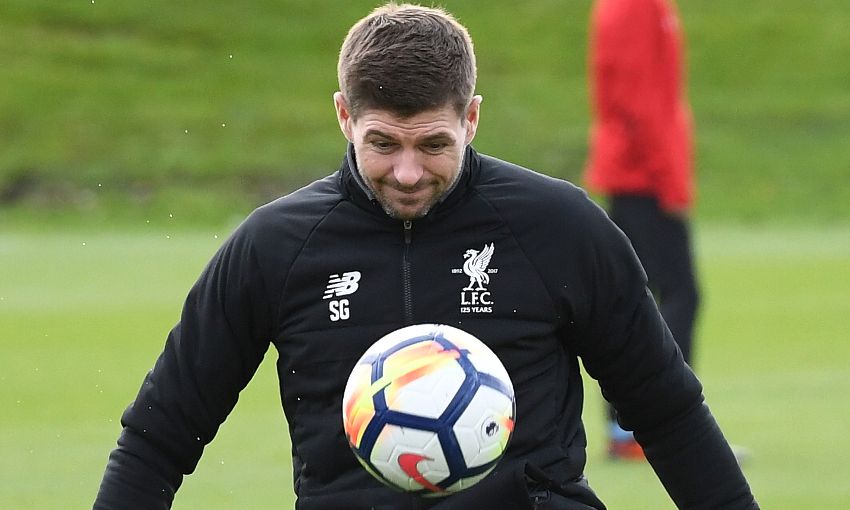 Ahead of Liverpool’s FA Youth Cup fourth-round tie with Arsenal at Anfield on Saturday, we caught up with manager Steven Gerrard to get the inside track on his squad.

The U18s have suffered just one defeat this season and sit proudly at the top of the U18s Premier League.

And on Saturday at 3pm GMT, the young Reds will get their first taste of playing at Anfield when the Gunners come to town.

So, ahead of the visit of Arsenal, Liverpoolfc.com popped along to the Academy to sit down with Gerrard and get a unique insight into the players he'll have at his disposal... 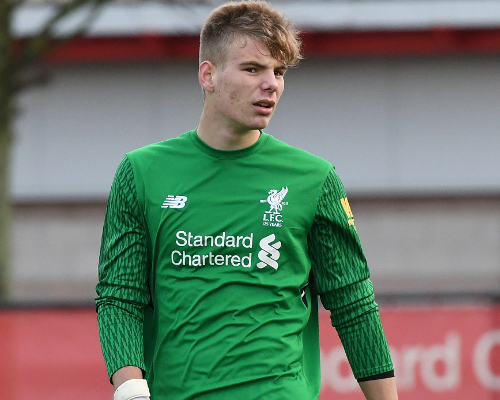 Viteslav Jaros: “Veet is a very young 'keeper from the Czech Republic, who came over to England in the summer. It has been big environment for him and it has taken him two or three months to settle in, so it was important we didn’t throw in him straight away and we have been really patient. He’s shown signs that he’s ready now and in the last couple of months he’s been No.1 for the U18s, so credit to him. He’s settled in quicker than we thought and is doing reasonably well.”

Dan Atherton: “Dan is lively, great for the group and a big character. He’s the noise of the group, both good and bad! He is always positive, he always trains well, and is  professional in his approach considering he is sometimes the No.1 or No.2 'keeper. He’s great to have around."

Ben Williams: “Ben hasn’t played much but has remained professional. He’s working hard and he keeps pushing Dan and Veet, so we are pleased with Ben’s approach. We’ve got three good goalkeepers and we’re quite lucky." 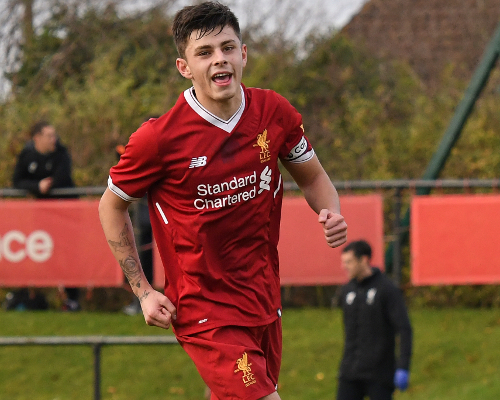 Adam Lewis: “Adam is the captain and has been very consistent. He recently signed a professional contract - and deservedly so. His quality from the left side has been outstanding. He’s learning the other side of the game as well, his one-v-ones and his positional play, which is improving all the time. He is in a good place mentally and he has been outstanding."

Rhys Williams: "Big Rhys has just started full-time as a first year and is coming to terms with the demands of playing every single day. He will be a fantastic leader one day, he is learning that side of the game and he is the vice-captain of this squad. Of late, his form has dipped a bit but what I’ve been very happy with is how he wants to get it back right and he wants to get back to where he was two or three weeks ago. That’s a good sign when you know a player cares and wants to improve. Rhys is going to be a good ‘un.” 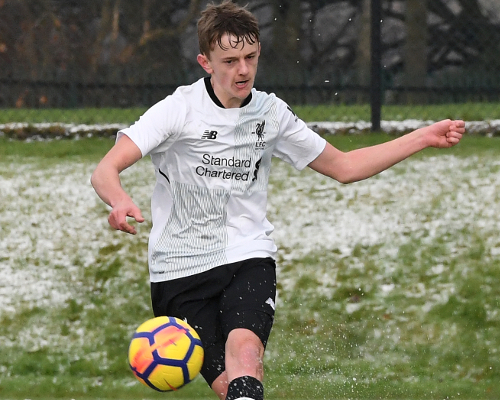 Tom Clayton: “Tom is a great kid. He trains well every day, is very professional, quiet and very likeable. He is a solid defender and you know what you are getting out of Tom, week-in, week-out, so having him back fit and available [after missing the first few months of the season through injury] certainly helps this group.”

Anthony Glennon: "Glenno has been a starter week-in, week-out from the very off, but of late he has found his place taken by Morgan Boyes. We have been looking at what type of reaction he has given us, and to be fair he has got his head down; he is working hard and he is pushing Boyesey now to get back in the team. Glenno has found it tough the last couple of weeks being out of the team, because he has been so used to starting. Anthony is a great kid, so we’ll have to wait and see whether he can push and get back in the team. We have got defenders back from injury fit and available now, so competition for places is strong.”

Morgan Boyes: “Boyesey has broken in, so credit to him. He has trained really well and looked really, really strong. He gives us a bit of pace at the back, he is a big lad and has a physical presence. He has been out for a year with injury, so it will take time until he is up to full speed, but credit to him for the way he has dislodged Glenno in the XI.”

Neco Williams: “Neco has been out for six months with a back injury, which he found really hard mentally to get his head around. You can see it in his face, he just likes playing football. We need him back fit and 100 per cent as soon as we can. We have to be patient and it might take two or three months to get back to himself, but he is pushing for a place because his quality is there.” 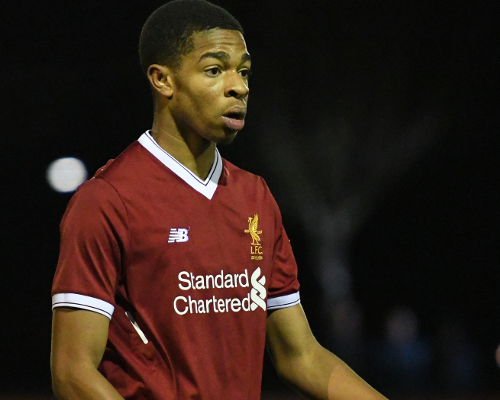 Elijah Dixon-Bonner: “Elijah has been the most improved for me out of the whole squad in terms of where he was in pre-season to where he is now. He is a different player; he is fitter, he is stronger, he is more aggressive, he is showing more quality. So in terms of seeing improvement in one individual, Elijah’s the man!”

Edvard Tagseth: “Eddie is 'Mr Consistency'. Physically he gives you huge numbers in every single game. He is as fit as a fiddle, very professional, eats the right stuff and lives the right way. He is the model pro, if you like, without being a pro! He is someone who you never have to speak to because he doesn’t do anything wrong. What I would say is Eddie’s last couple of performances have come down slightly, but they were still good performances because he has been playing so well. We just need Eddie to turn the volume up a little and get back to where he was two or three weeks ago, but I’m very pleased with him.”

Abdi Sharif: “Abdi is similar to Eddie in terms of physically he can hit big numbers. He is a very strong runner, leggy. He has found himself out of the team and off the bench in recent weeks, so we are trying to push Abdi and make him more aggressive and improve him in possession. Abdi is certainly an important member of the squad moving forward.”

Luis Longstaff: “Like Abdi, Luis has found it hard being out of the XI. Luis loves the game, you always see him with a ball learning his skills. He has found it hard recently mentally because he is not in the XI and he is desperate to be in it. Luis is one we are working with and trying to improve certain parts of his game, but again he is pushing to get back in the squad. He has to try and dislodge a good player in this team and it’s difficult.” 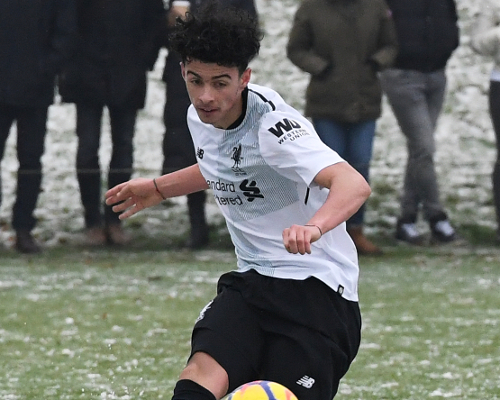 Curtis Jones: “Curt is a wonderful talent with all the ability in the world. On the ball and in possession he is fantastic. We are working a lot with him on the other side of his game – the duels, the competing, the running and the 'dirty' side of the game that No.10s don’t usually like doing. But in terms of the numbers he is delivering at U18 level, he has been very strong. His performances have been strong and when we get the other side of his game as strong as his possession game we are going to have a really scary footballer!”

Rafael Camacho: "Rafa has hit big numbers for us as well. Rafa is similar to Curt in many ways. At times he can go a bit individual and play with a bit of ego. He has bags of talent and he is another one we are working very hard on to do the other side of the game.” 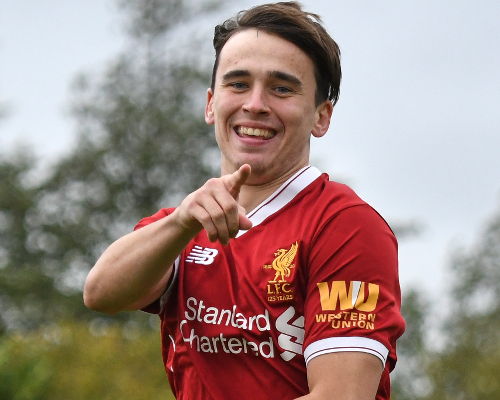 Liam Millar: “Liam is our top scorer. He has got unbelievable pace and unbelievable power. He is in a really good place at the moment. I had to take him out of the squad at the start of the season to give him that shock, that kick up the backside, these youngsters need every now and again. Since that his reaction has been incredible. He is in such a better place than where he was when I took him out of the squad. He has been more consistent and mentally he is in a better place. What we are working on with Liam is how sometimes you will come up against defenders who are as quick and as strong as you, so what other way are you going to beat them? We are trying to add different parts to his game to make him a better player.” 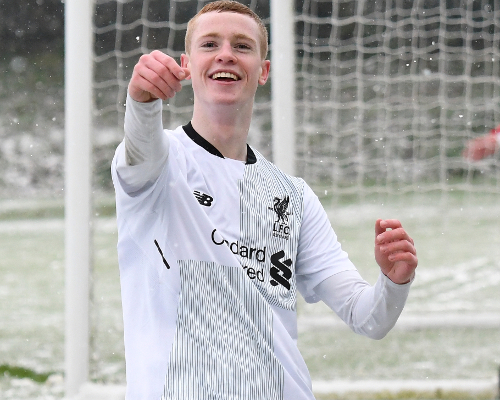 Glen McAuley: “Glen has missed the last couple of games with an injury but we are hoping he might make training on Thursday or Friday before the game. He has been missed and we certainly missed him last week at Tottenham. Glen has been a squad player, a starter... he’s been everything really. He’s a fantastic impact player and he also works his socks off when he plays. We need him fit and available because he’s a goalscorer, and the more goalscorers you have got in your team and squad it’s very healthy.”

Yasser Larouci: “Yasser is a very similar situation to Veet [Viteslav Jaros] in terms of coming over from a different country. He has taken his time to settle in and find his feet, but his training performances have improved and that’s why he has come into the side and been a starter of late. He has done himself no harm. He missed a big chance for us at Tottenham last week and he is still coming to terms with the positional side of being a right-wing back. He is learning the game, he is coachable, his English is improving and he is in a decent place. He is further forward than what we thought he would be at this stage.”

Paul Glatzel: “It has been frustrating for Paul and frustrating for us because he's struggled with injuries and has missed too much football over the last couple of years. He is still growing, he is still finding his body and we need to keep supporting him. He has picked up another niggle recently, which has been frustrating because he would have been in the squad for Arsenal. He is a wonderful talent, he has got lovely bits of skill and turns and he can certainly finish. Paul is one we are going to have to be patient with I think and I think he might come strong and more robust further down the line.” 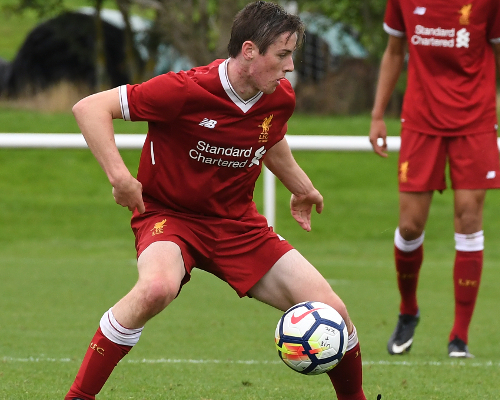 Liam Coyle: “Liam is unfortunately sidelined with a back problem at the moment. He started the season well, he got a couple of goals for us and always leads by example. It will be hurting Coyley missing the matches and the training because he is a genuine kid who loves football. I know it is going to be hard for him watching the team at Anfield at the weekend, but he will be there and supporting the lads because that’s the type of kid he is. We can’t wait to have him back because we know how much it’s hurting him being out.”

Jordan Hunter: "Jordan is another player who started the season but is out with an injury. Jordan is a versatile player who can play in midfield but he did a steady job for us at right-back. The injury came at a bad time for him but the sooner we can get Jordan and Coyley back into the squad the better it is for me."

If you would like to go to Anfield on Saturday and support Gerrard's team, the Kop will be open and tickets will be priced at just £3 for adults and £1 for juniors, young adults and over 65s.

Season ticket holders and members can gain admission free of charge but need to secure their ticket in advance online. Click here to buy your tickets.