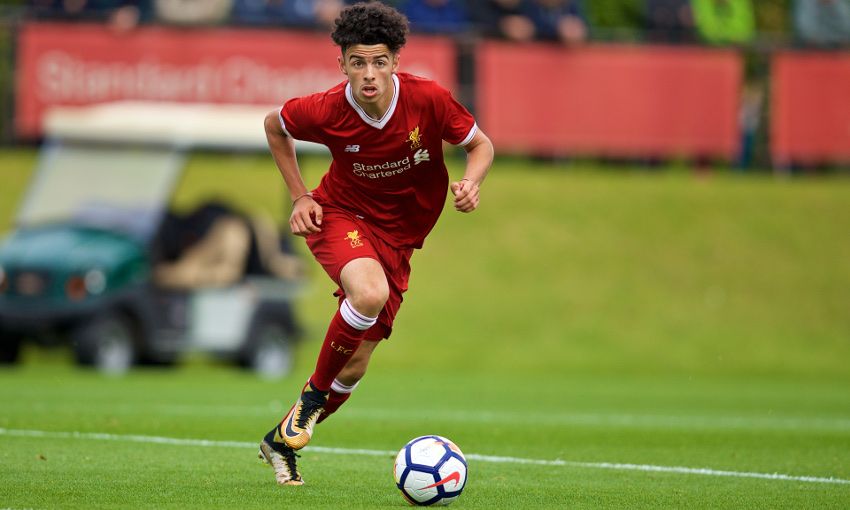 It is testament to Curtis Jones’ lofty ambitions that, having broken into the U18s and trained with the first team at the tender age of 15 last term, he sums up his aims for this season with: “For me, it’s just about 'how can I progress?'”

Still just 16, the Scouse midfielder is already considered a fully-fledged member of Steven Gerrard’s U18 squad, having built impressively on a debut he hadn’t anticipated last December.

He had, understandably given his age, started 2016-17 with Barry Lewtas and the U16s, but was unexpectedly drafted into Neil Critchley’s starting XI for a 2-1 win over Middlesbrough at Kirkby before the turn of the year.

He recalls: “It was a big surprise. But as a confident young lad I went out there and I played well and from there I’ve just carried on.”

Jones was cruelly denied a goal on his bow by the width of the post but performed well, and added five strikes to more eye-catching outings before the end of the campaign.

His efforts did not go unnoticed at Melwood, and he was part of a select group of Academy prospects who were given the chance to train alongside senior stars on occasion last season.

Reflecting on his call-up to work under Jürgen Klopp, he said: “It was an honour. It’s different to training normally with your own age, physically they’re more built, it’s harder.

“How Jürgen has them working is 100 per cent every time, so to go in there at the age of 15 was a big thing for me. The standard was unbelievable.

“From defenders to attackers, they’re all comfortable on the ball and when they give away the ball it’s like a light switch – they try and get it back as quick as they can. Lads at the Academy know what it takes to be up there with Jürgen but it’s all about if you can do it.

“To be going up there and having a chance to show the manager what I’m capable of is a really big thing.

“With the Academy lads and the first-team lads being in separate buildings, having the opportunity to go up there in front of the manager is massive.”

As a lad who turned down overtures from Everton and both Manchester City and United as a youngster in order to join his ‘dream club’ Liverpool, Jones could have been forgiven for viewing those semi-regular jaunts to the Reds’ West Derby complex as the culmination of all his hard work thus far.

But, true to his aspirational nature, Jones knows these trips are just the latest small steps in a long journey – and a reminder of the standards he needs to reach.

He explained: “Every young lad’s dream is to break into the first team but, saying that, if I want to catch the eye of the manager as an attacking player, I definitely think I’ll need a lot more goals and a lot more assists.

“You see with Mane, Salah, Firmino, they’re causing teams a big problem and scoring a lot of goals. If I want to get the breakthrough and catch his eye, I need to be matching that.”

In his bid to match the output of LFC’s first teamers, the teenager could do worse than accept advice from a player with the combination of quality and experience possessed by Daniel Sturridge.

One of Jones’ social media posts last season showed the Academy hopeful doing just that – and receiving a huge boost to his confidence from the No.15 in the process.

The 16-year-old added: “He’s a great lad. He’s humble, he’s been there before and knows what it takes. He knows how hard Klopp has the lads working.

“Daniel was basically telling me he can see that I’m a technically gifted player and that I’m comfortable on the ball but said Jürgen will know I’m technically good and that’s why I’m up there.

“He said if I can get the other side of my game up to the standard of when I’ve got the ball then I shouldn’t have problems.

“To have Daniel there, who’s a big player for Liverpool and also a big part of the international team, giving me confidence and telling me that I’m able to play around the first team, it boosted me.

“It’s also just having him taking his time out to come over and give not just me but a few of the other lads his point of view on the session, it’s a nice touch.

“It’s the same with any player, they come over and give you advice, it makes you think you’ve caught their eye.”

Of course, should Jones need any advice on a daily basis at Kirkby, he now has a coach who knows all about making the journey from Academy hopeful to Anfield star.

That Steven Gerrard is familiar with both the desire for and weight of expectation placed upon a Scouser in the first team can do no harm, either. 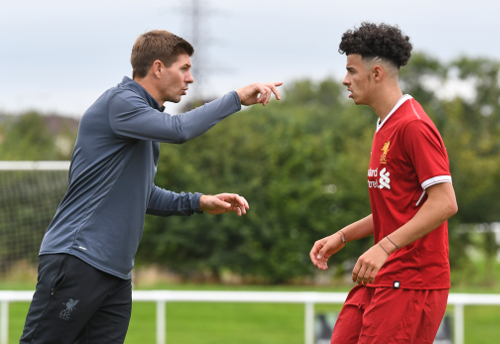 “I think for any Liverpool lad, especially being a local boy, it’s a massive thing,” Jones enthused.

“Whenever anyone says Liverpool, you know the first person they’re going to think of is Steven Gerrard.

“He’s a legend, he’s a character and to have him around the team is benefiting us. I would definitely say I’ve got better under him, so I’d like to see where he takes us.

“He’s a great man, Steven. Every time you’re unsure of something you can go to him, he’ll always be there, he’s supportive.

“He’s got me working on timing my runs into the box and making sure that I’m getting in there. I think a big part of that is fitness and being able to get into the box.

“On top of that, Steven is a man who’s all for the team, it’s not about him and how he can look in the media. It’s more about his team and how he can get the best out of his players and can they take the next step up to Jürgen.”