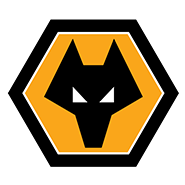 Liverpool were eliminated from the FA Cup after they were beaten 2-1 by Wolverhampton Wanderers at Molineux in the third-round stage.

Raul Jimenez and Ruben Neves struck for the hosts, with a Divock Origi effort in between for the Reds, who handed senior debuts to Curtis Jones, Rafa Camacho and Ki-Jana Hoever.

You can see what he had to say about Dejan Lovren's injury and the debut of Ki-Jana Hoever by clicking here, or read his general thoughts on the result and the Reds' performance by clicking here. 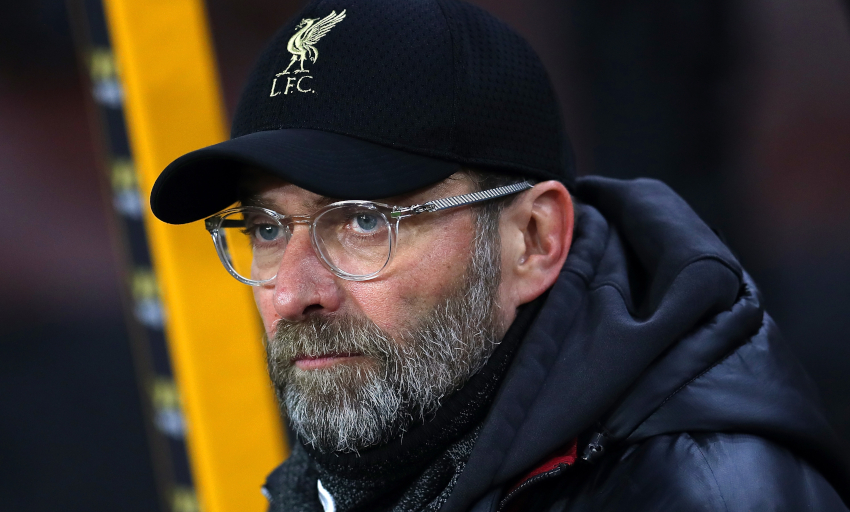 Here's the story of the game in Opta stats and widgets...

Liverpool's FA Cup campaign is ended at the first hurdle as they're beaten by Wolves at Molineux.

The Reds, who needed to bring on 16-year-old Ki-Jana Hoever for the injured Dejan Lovren after eight minutes, fell behind in the first half through Raul Jimenez's strike. 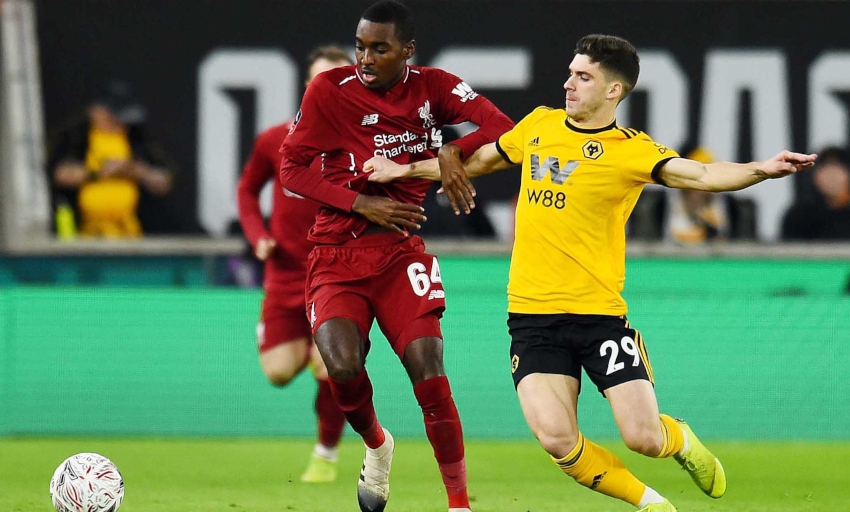 Mignolet is forward and Fabinho gets a touch on a Salah cross to turn it goalwards, but it doesn't have the power to beat Ruddy.

Three minutes of added time to be played...

Salah cuts inside onto his left and strikes goalwards. Coady heads it away in front of the line.

Final change for the hosts - Costa is on for Jimenez.

Camacho skews well wide with a shot from range.

Wolves change - Doherty is on for Otto.

Vital clearance from Hoever from Jimenez's cross, with Cavaleiro lurking.

Double change for Liverpool - Firmino and Salah are on for Sturridge and Jones.

Oh, how close was that?

Shaqiri's free-kick from 20 yards beats Ruddy but hits the inside of the post and flies away from goal.

Looks like Mohamed Salah is being prepared to come on for the Reds.

Jimenez almost finds a way past Hoever, but the ball runs behind.

Neves collects the ball 25 yards from goal, sets himself and beats Mignolet with a fine drive from distance that arrows inside the left post.

Change for Wolves - Cavaleiro is on for Jota.

Liverpool draw level with a thumping effort from Origi.

The Reds work the opening well as Shaqiri's pass into the area is controlled by Milner with his back to goal. His spin and shot is blocked, but it rebounds for Origi, who shifts it onto his left and hammers one beyond Ruddy from the edge of the area.

Up and running again

Wolves re-start the game at Molineux.

The story of the first half in numbers...

Raul Jimenez's goal after 38 minutes is the difference between the teams at the break in this FA Cup third-round tie.

Liverpool lost Dejan Lovren to injury after seven minutes, with 16-year-old Ki-Jana Hoever coming on to replace him. 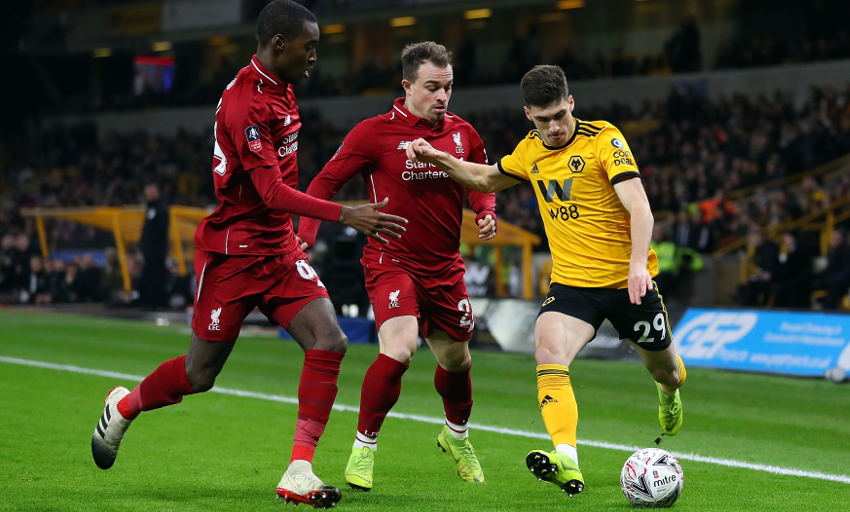 Fabinho has to block from Jimenez after Liverpool gave the ball away outside their own box.

Three minutes of added time to be played at the end of the first half...

The hosts take the lead as Milner's over-hit touch is pounced upon by Jota, who starts a counter by evading a challenge from Fabinho and nudging play out to Jimenez. The striker races down the right and into the area before steering beyond Mignolet.

Otto finds space down the right and fires a cross into the Liverpool box, but Mignolet claims.

Wolves make a mess of trying to clear Milner's hoisted ball into the box as Coady and Bennett collide inside the box. Shaqiri pokes the loose ball wide.

Lovely run from Jones down the right, including a nutmeg on Bennett, but his cross is claimed by Ruddy.

A early yellow for Milner for a tug on Jota.

Otto has a shot deflected behind by Moreno as Wolves counter.

Ki-Jana Hoever is the third youngest player in Liverpool's history, behind only Jerome Sinclair and Jack Robinson.

He's gone to centre-back alongside Fabinho.

Origi lofts a pass into the direction of Sturridge's run, but it runs through to Ruddy before the striker can reach it.

And Lovren can't continue, so 16-year-old Hoever is on for his senior debut.

An early worry for Liverpool here as Dejan Lovren goes down and needs treatment. It doesn't look good as Ki-Jana Hoever readies himself to come on.

Daniel Sturridge starts the game and we're up and running at Molineux.

A minute's applause is being held in memory of Wolves legend Bill Slater, who sadly passed away last month.

The spectacular pre-match firework and light show is under way and here come the teams...

A quick bit of transfer news ahead of kick-off and Ovie Ejaria has joined Reading on loan until the end of the season. 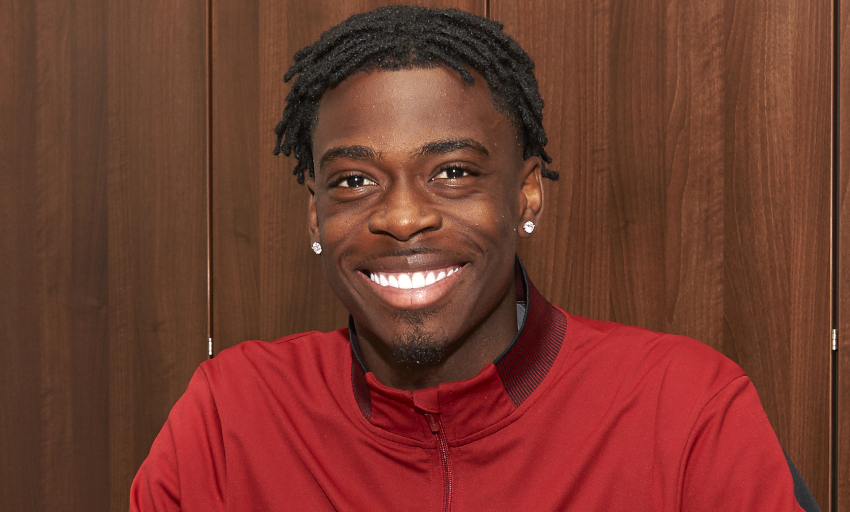 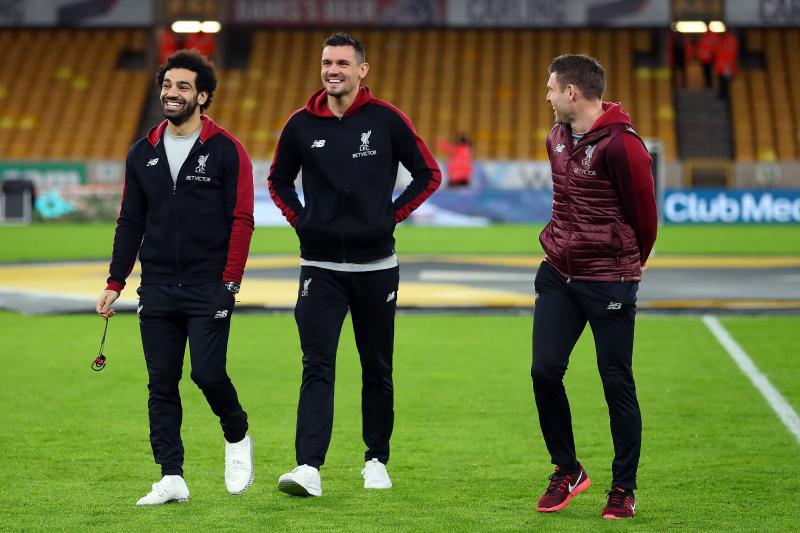 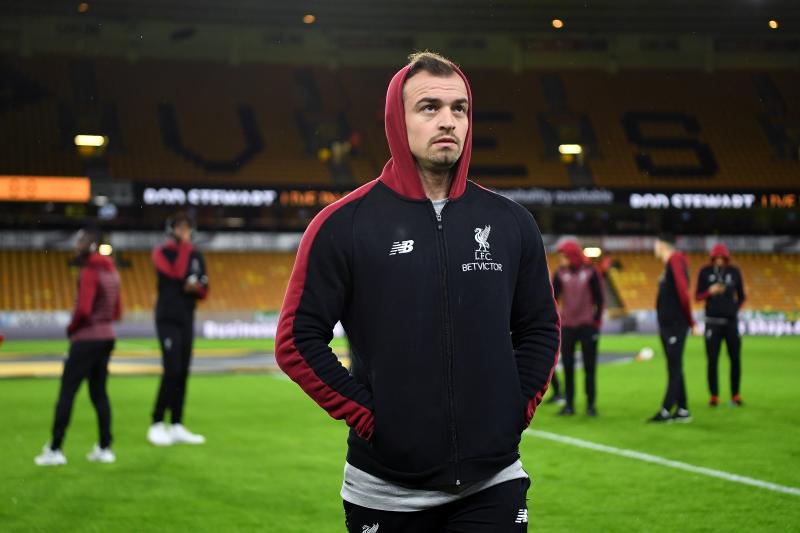 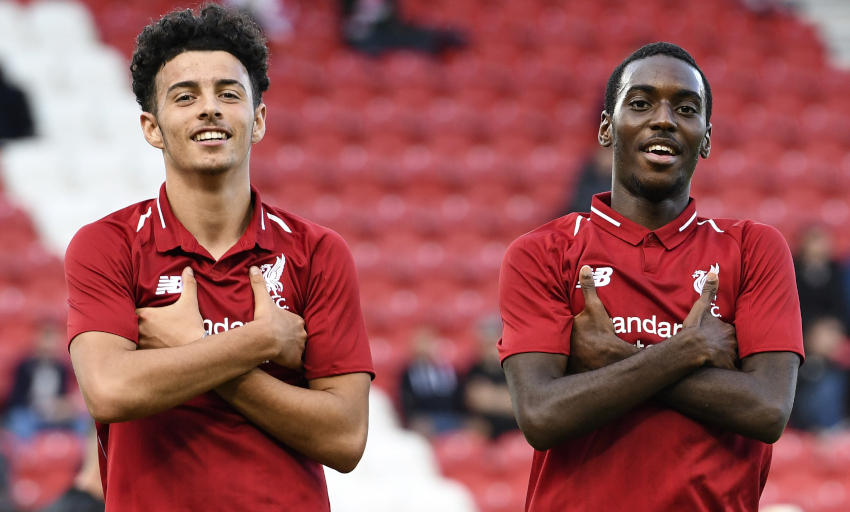 He said: “I had to make these changes. A few players were really ill and then in the last session yesterday we lost Adam Lallana with a minor thing, but it’s enough not [to be able] to play – and Hendo had something from the Man City game.

“We had to make a few changes already, it was clear. Virg cannot play; he is at home and hopefully it is nothing, but he has played all the games so far, so we had to try to find a solution for that – and we found it, hopefully, with Fabinho."

Klopp added: “It’s really good, really exciting, but they still have a lot to come. It’s really nice having them around, but now it’s time to show up – it’s a situation where we need them 100 per cent, so let’s try it.”

On this day in 2006, Xabi Alonso scored the goal below from inside his own half as Liverpool won 5-3 at Luton Town in the FA Cup third round. The Reds, of course, went on to lift the trophy that season.

Our official partner BetVictor has the answer...

Fancy a flutter? Click here to place your bet now and view their match specials. 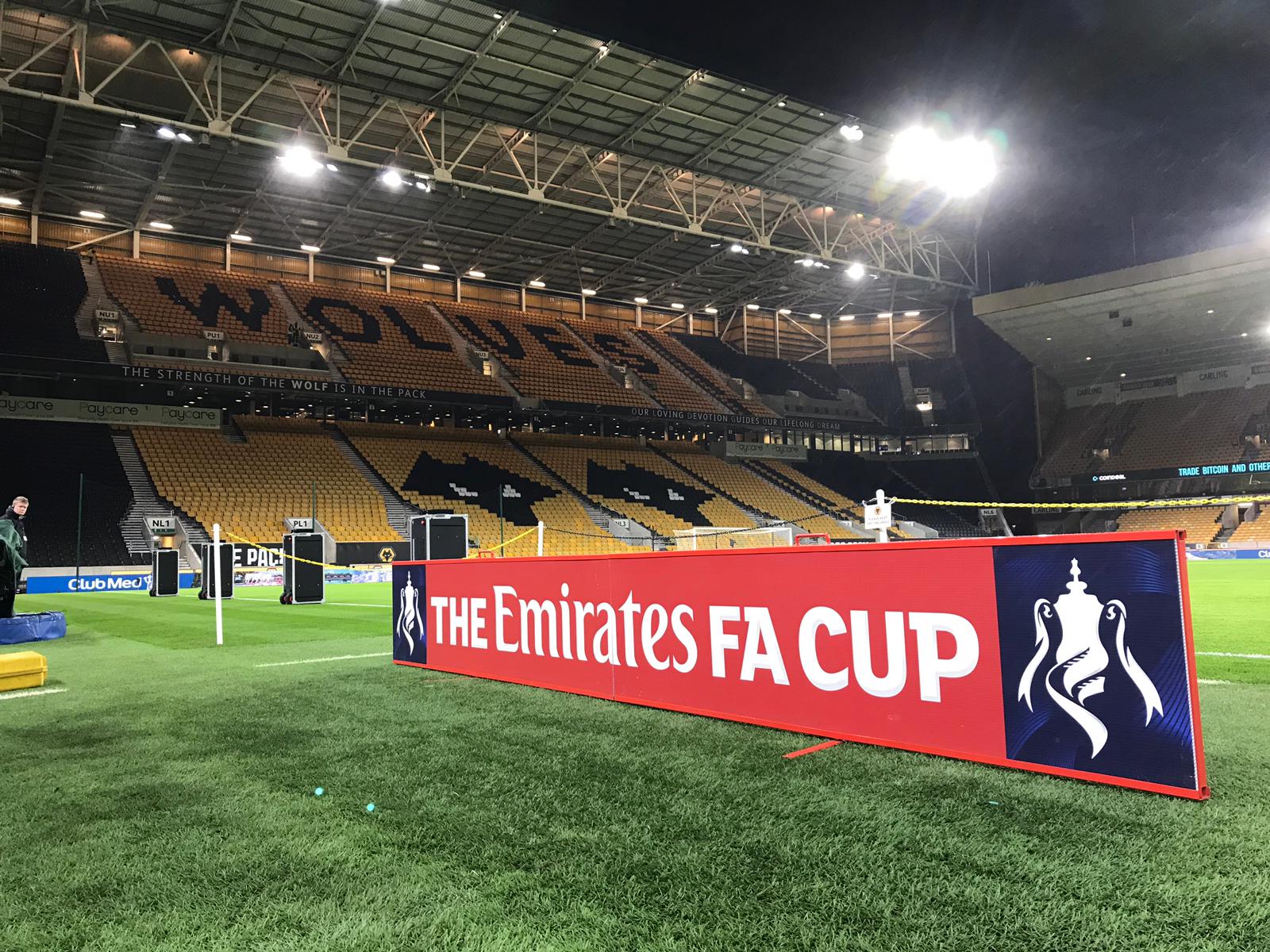 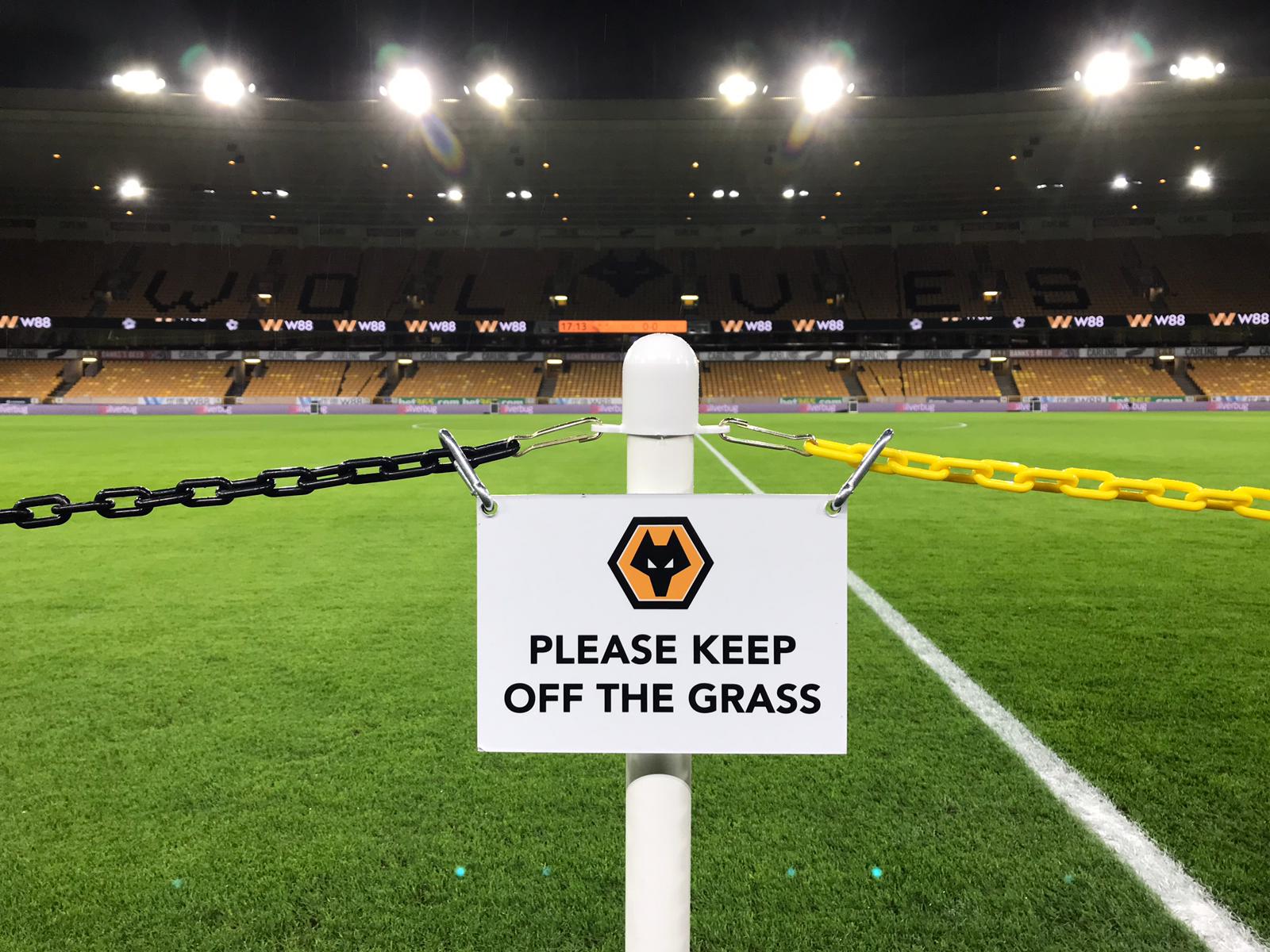 Former Red and Wolves captain Conor Coady believes the hosts can draw on the league meeting between the sides when they face off again this evening.

“It’s going to be a big challenge, but we go into every game with no fear and it will be no different against Liverpool,” he states in his programme notes.

“We know how tough a game it’s going to be, having played them recently, but we’ll learn from the mistakes we made that night.

“They’re a top-drawer side and punished us for small lapses in concentration, but we must take heart from the problems we caused them, particularly in the first half. We were fearless and used our width, with the wing-backs getting forward when possible, so we’ll need to be positive again tonight.”

As you can see below, the boss also discussed Naby Keita, Adam Lallana and his centre-back options for Monday's game with the media...

Another award for Mo

Just to veer away from tonight's game for a moment, Mohamed Salah was this morning named PFA Player of the Month for December.

Scoring six goals to help your team win all seven of their Premier League games throughout the month isn't bad, to be fair... 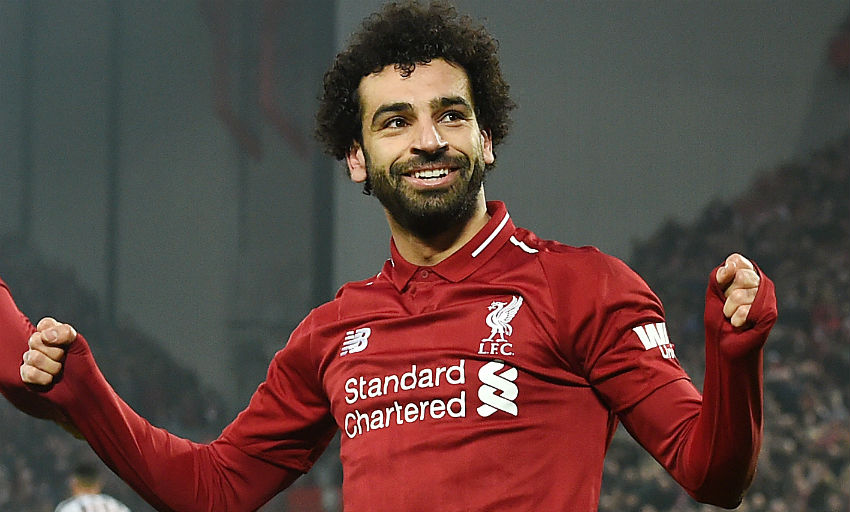 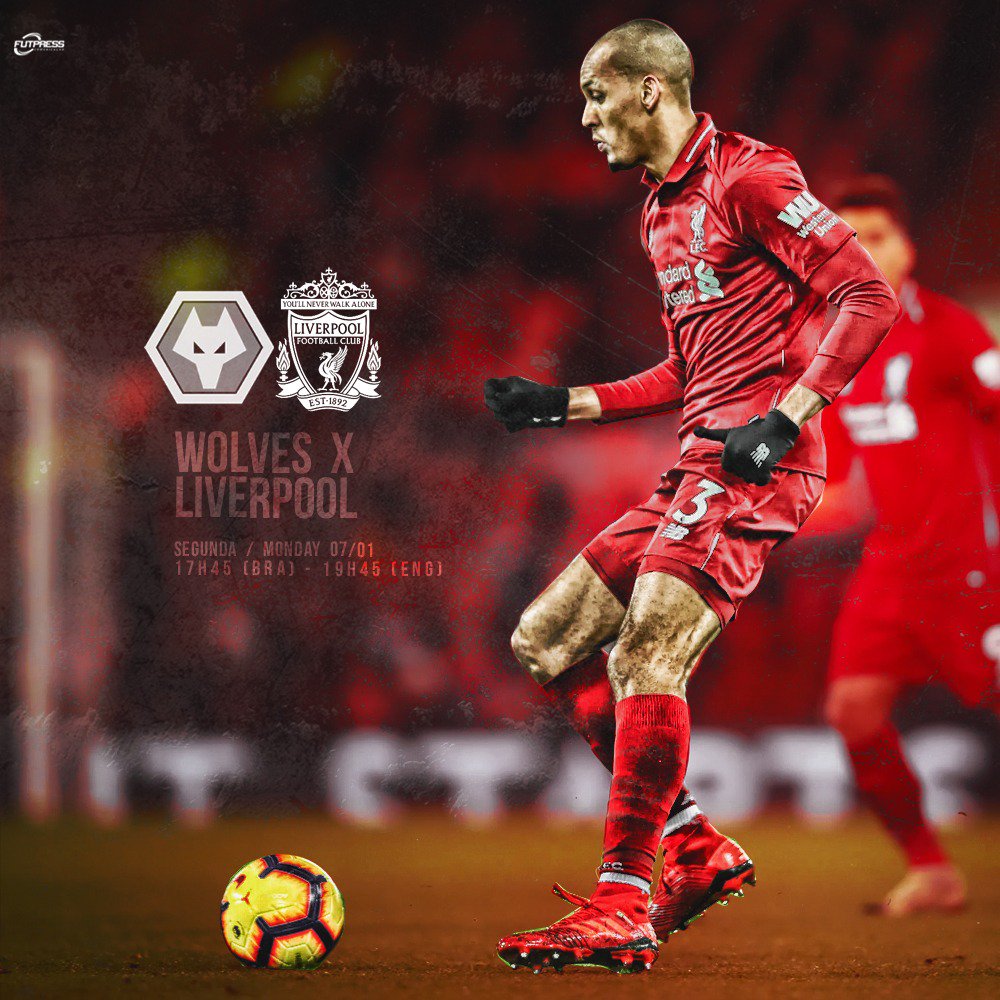 Well, the last time we were here just before Christmas the rain was, frankly, ridiculous.

With that in mind, we're happy to report that it's expected to remain dry throughout tonight's match. Temperature-wise, we're apparantly looking at a quite-mild-for-this-time-of-year nine degrees come kick-off.

'We want to bounce back immediately'

We caught up with Simon Mignolet ahead of tonight's match and the goalkeeper told us just how determined the Reds are to respond to their first Premier League loss of the season to Manchester City last time out. 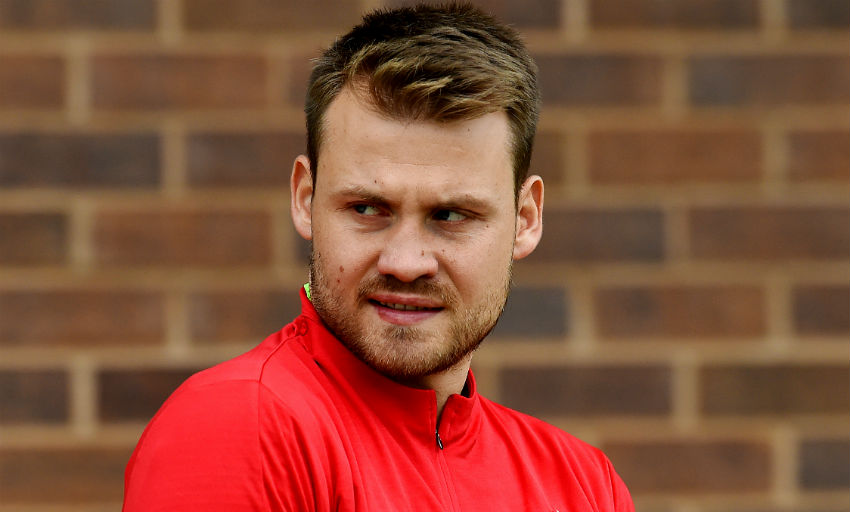 "Obviously we’ve got a lot of games coming up and it’s always nice to respond straight away," he told Liverpoolfc.com

"It’s in a different competition so it’s slightly different, but I think we want to put things right. I think that’s also what was said straight after the game inside the dressing room: yeah, we lost against City in a great fixture, probably one of the best fixtures in the Premier League, but in the same way we’re still four points ahead and the one thing we can’t do is drop our heads.

"The way to do that is by responding and getting the victory and going through to the next round of the FA Cup."

Landmarks for Sadio and Virgil?

If selected, Mane will make his 100th Liverpool appearance tonight and Van Dijk will play his 50th game for the club. 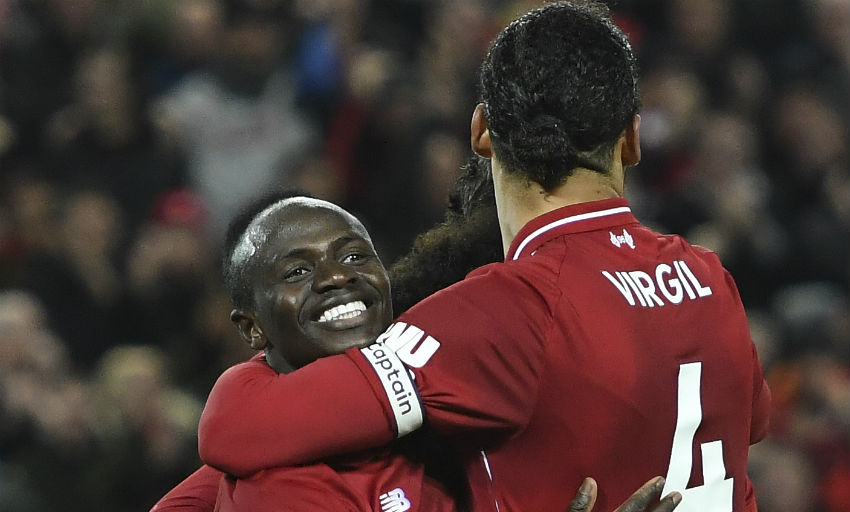 We won't know for sure who's playing tonight until later on, of course, but Jürgen Klopp has already confirmed that Simon Mignolet and Alberto Moreno will start for the Reds.

"We have to [make changes]. That’s clear. We came through the intense period now somehow OK, but of course we have to make changes. How many I don’t know, but we have to. There is no chance for anything else," the boss told the media on Saturday.

Wolves, meanwhile, have a fully fit squad to choose from.

We've been here before, of course.

17 days ago to be exact, when goals by Mohamed Salah and Virgil van Dijk secured a 2-0 Premier League victory at Wolves.

Watch the best bits of that win again below...

Up for the Cup?

Welcome to Liverpoolfc.com's live matchday blog, with the Reds taking on Wolverhampton Wanderers in the FA Cup third round tonight.

Stick with us for comprehensive rolling coverage of all the build-up, action and reaction from Molineux. 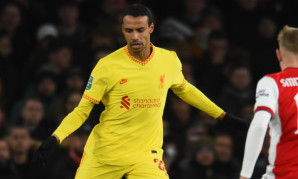 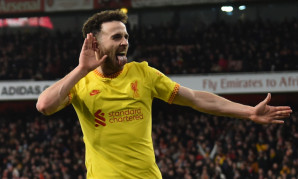 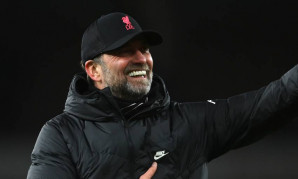