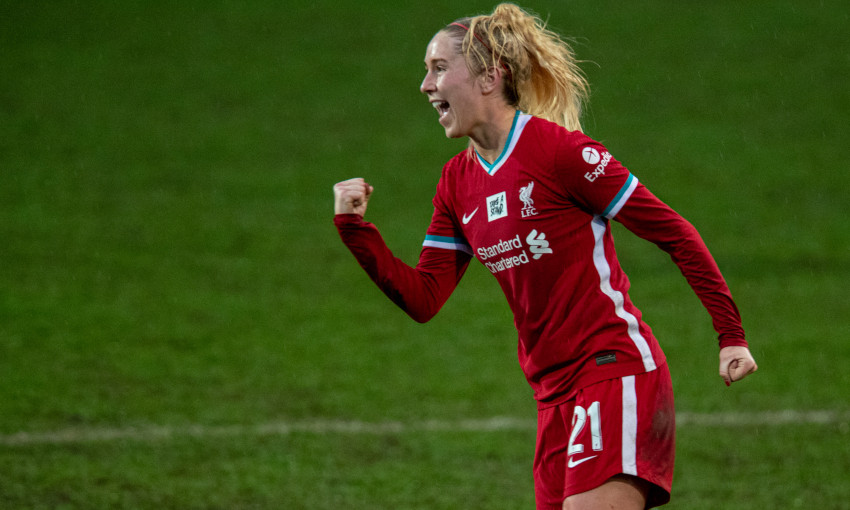 Missy Bo Kearns intends to use her Standard Chartered Women's Player of the Season award as further incentive to keep improving.

The Liverpool FC Women midfielder clinched the accolade for 2020-21 after a breakthrough campaign in which she made 19 appearances and scored two goals.

Kearns collected the most votes in our poll of supporters on Liverpoolfc.com and, after the initial shock, told of her intentions to harness the honour as motivation.

“Thank you,” she said. “I think it’s a proud moment. I wasn’t expecting it; I was in the car with my dad and was tagged in it on Instagram – we were just both in shock.

“To get this award just shows that now I’ve got to kick on and keep pushing.”

On the added meaning the award holds because it is decided by supporters, she continued: “Yeah, because they watch us – obviously not in the ground this season, but they were following us from the outside – [and] they must have seen that since I’ve been given the chance I’ve tried my hardest and done something.

“It’s an honour that what I’ve been working hard for so long [for] is starting to pay off.”

Kearns began to establish a regular starting place in the LFC Women side in the New Year and was an integral figure as the Reds finished the FA Women’s Championship season on an eight-game unbeaten run.

“As soon as I started getting minutes – and comfortable minutes, not like 10 or 15 minutes – I started to get time to showcase what I can actually do,” said the 20-year-old.

“It wasn’t like I was on trial just coming on in games, I think I got comfortable and my confidence definitely grew. I was playing how I like to play – no nerves, just with freedom.”

Kearns added: “The highlight – the biggest one, that has meant the most to me – is getting minutes. That’s what has been the most important for me.

“Then the goals and assists, and my performances, will come with it the more I keep playing. That’s how I see it.”