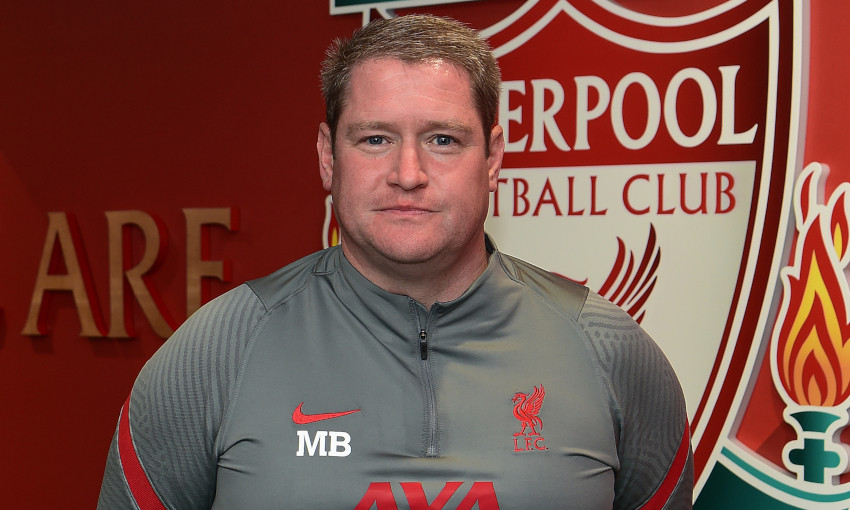 Matt Beard is relishing the hard work and preparations as he re-integrates with the Liverpool FC Women set-up ahead of the 2021-22 campaign.

Having led the Reds to successive Women’s Super League titles in 2013 and 2014, Beard’s return for a second spell in charge was confirmed earlier this month.

When the players convene from a summer break on June 28, they’ll begin a journey towards their No.1 target for the new season: promotion from the FA Women’s Championship.

We caught up with Beard this week to discuss his opening days back at the helm and the work going on behind the scenes for next term. Read the chat below.

Watch: Matt Beard on his first week back with LFC Women

Matt, it’s your first week back with the club. How are you settling in?

Yeah, it has been a good week, a positive week. It was great to meet all the staff face to face; we’ve had a lot of calls with staff over Zoom and stuff. It’s great to see the training ground, great to meet the staff and starting to put the plans in place for pre-season and the coming season.

You’ve had a good look around the training ground now, what are your first impressions?

We’ve got good facilities here. I’m really pleased and I’m looking forward to getting the whole group in together now and kicking on.

We’ve said farewell to a few familiar faces, which is part of the game but difficult nonetheless?

Yeah, those conversations are never easy. Yes, it is part and parcel of the game but this group got relegated from the WSL and they’ve not gone back up in the Championship. It proved last year what a tough division it is and it’s going to be even tougher this year with the investment of Charlton and Coventry and teams like Lewes, so it’s going to be a tougher division this year. The ambition is to get promoted, we’re working incredibly hard on bringing players in and I’m really excited with the conversations we’re having and the options we’ve got available. Hopefully we can start to get the new players in and over the line in the coming weeks.

Schedule-wise, how does it look for you? How do the next few weeks pan out?

Pre-season is now starting to be planned. The players report back in on June 28. I’m still in the process of relocating and trying to find somewhere to live, so I’ve got a lot going on right now. But as I said before, I can’t wait to get started and I can’t wait to get the players in. It was great to meet the staff this week as well. All the plans are being put in place for when the girls come back in on June 28 – we want to hit the ground running.

You must really relish that time to cast your eye over the squad?

Yeah, definitely. I’ve watched a lot of games and a lot of individual clips of the current group. I know the areas we’ve identified – not just me but the whole technical team – the areas we want to improve on. We want to create more competition for places. We’ve done a lot of homework on our own group and, for me, it’s also learning about this league and the teams we’re playing against. So there’s a lot going on and it’s a challenge I can’t wait to get my teeth into.

Home-grown, 𝑻𝑨𝑳𝑬𝑵𝑻! 👌 A standout season from one of our own. Congratulations on being voted the @StanChart Player… https://t.co/B8kvGeaUig

The aim will be to get promotion back into the WSL – how confident are you that you can achieve that?

I’m confident, I think we’ve got a really good core group here. The great thing for me is they’ve experienced the Championship and they know what’s expected. If you look at a club like Liverpool Football Club, it’s going to be like a cup final every week for us. It’s understanding that part of the journey we’re going to go on next year. We will do our utmost to get promoted. It’s not going to be a given, it’s not going to be guaranteed, we have to earn that right. My job is to make sure the players are focused, they’re fit, they’re prepared and, as I said before, me and the staff will work incredibly hard to achieve our aim this season.

You’ve got so much history with the club but this is a different type of challenge, isn’t it? The Championship is a notoriously tough league to get out of…

Yeah, I really enjoyed my time at Liverpool when I was here before but obviously that is in the past now – it’s about what I do this time around, or what we do this time around. I’m incredibly excited for that. I’m honoured I’ve been given the opportunity to come back to the club because it is a special club. It would be a fantastic achievement if we can get back to the WSL, but we’re not going to take anything for granted, we know it’s going to be tough. But we’ll do our utmost to make sure that we do that.

And fingers crossed, you’ll have the fans back for the new campaign – I’m sure you can’t wait for that?

Yeah, it would be fantastic. It was great to see the fans at Anfield at the weekend against Crystal Palace. And even just watching some of the play-off games on TV as well, seeing the fans back in stadiums is fantastic. I can’t wait to welcome our fans back and see some familiar faces from my time before. Hopefully we can build a team the fans can be proud of over the course of the season.