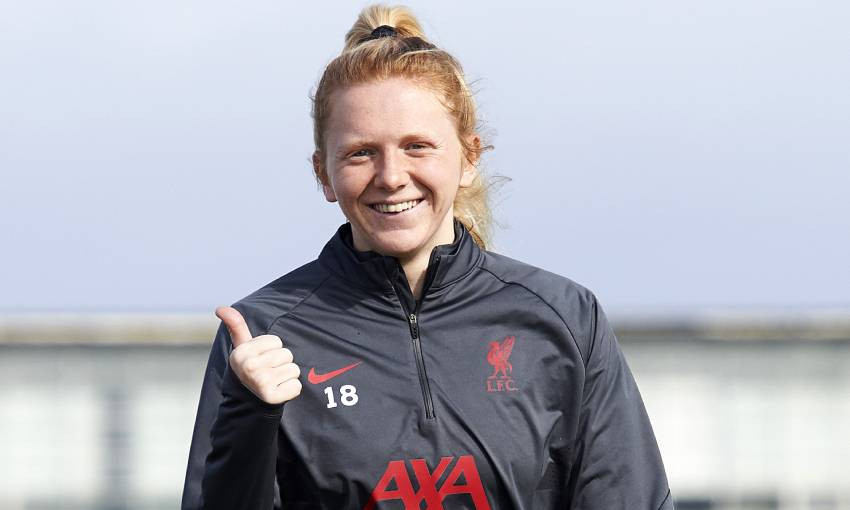 'Ceri is powerful and quick - she looks like a constant threat'

A midfield player with an eye goal and energy to burn is always going to catch the eye.

But when she’s a new signing who just can’t stop scoring goals, that’s a dream for any manager.

Ceri Holland has netted three times in her opening four games since arriving at Liverpool FC Women in January - form which saw her named the FA Women’s Championship Player of the Month for February earlier this week.

“I’ve settled in really well at Liverpool and it couldn’t have gone much better to be honest, so long may that continue,” Holland told Liverpoolfc.com.

Born in Skipton, North Yorkshire, the Reds’ No.18 qualifies to play for Wales through her mother and was recently called up to the senior squad for the first time.

After a spell at the University of Kansas in the USA, interim boss Amber Whiteley brought her to Liverpool at the start of 2021.

A memorable debut was to follow as she came off the bench to net a brilliant goal in a 2-2 draw at Charlton Athletic. 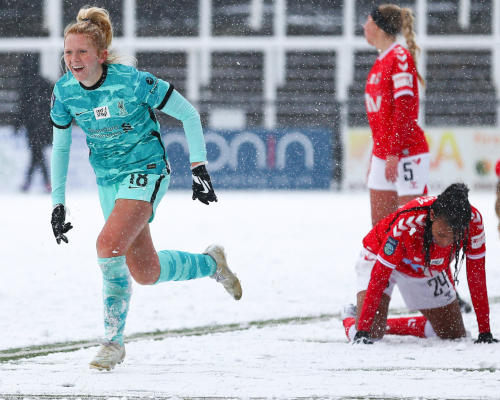 “It was definitely one to remember in the snow!” she said. “It was a great day for me in terms of getting a goal but it was a shame that we couldn’t get the three points and it was so frustrating when Charlton got that last-minute penalty.

“On a personal level, it was a fantastic moment for me to make my professional debut and mark it with a goal. So for me and my family that was a really proud day. I’ve got some great photos of the day.”

Holland then celebrated her first start for the Reds against London Bees at Prenton Park with another strike after a superb one-two with Melissa Lawley.

“I don’t normally get nervous before a game but they were good nerves and I knew what I needed to do in terms of helping the team going forward.

“I was really chuffed to get a goal, which added to my start really, so it was a good home debut. I just can’t wait now for the fans to get back in and hopefully celebrate with them.”

Holland sets herself high standards, and even though she turned in an eye-catching display last time out in the 5-0 win over Coventry United, including another goal, she was critical of her own performance.

The 23-year-old admitted: “For me personally, I was a little bit disappointed with myself because I probably should have scored three or four goals in that game.

“That’s something I need to work on and improve on, and Amber is helping me with that every day in training and it’s an area of my game that I’m still working quite hard on.

“So it was obviously nice to get a goal but I need to be more clinical in terms of I should have scored three or four that game.”

LFCTV GO: Watch the best of the Coventry action

Before arriving at Liverpool, Holland was more of a defensive-minded midfielder. However, Whiteley firmly believes she has the qualities to be a dynamic, all-rounder in her team.

The player herself is thoroughly enjoying the change of role.

“Amber has got me playing quite confidently at the moment and she's trying to get the best out of me as a player, which I have really benefited from.

“While I was playing in America I played a lot more in a defensive midfield role, but the attacking midfield role is new to me and it’s something I’m learning under Amber.

“She is doing a really good job teaching me the role and the runs I have to make. It’s been a really good learning experience for me personally because it will make a better player, knowing how to play in a different position.

A great month for the Reds! Enjoying every moment with this team 🔴❤️ https://t.co/ZhA13BKOrf

From an early age, Holland wanted to become a professional footballer, and encouragement from her dad led to her being able to showcase her qualities.

“I was about four years old when my dad took me down to the local juniors club and I kind of fell in love with the game there, as they say. I played with the local boys team until I was about 10 and then Leeds United came calling.

“When I was 14 I moved into the youth set-up at Blackburn Rovers before Manchester City wanted me and I spent three years in their reserve team. I got the opportunity to train with Manchester City’s Women’s first team a bit, which for me as a young player was an amazing experience.

“I always looked up to City captain Steph Houghton. She had a big influence on me and I just loved the way she approached every day in training and I learned a lot from her.

“I then made the decision to go and pursue football and education in America and I got my degree. That was one of the best decisions I’ve ever made in terms of the experience of a different culture and a different country.

“It helped me develop as an individual as well and I had a fantastic three-and-a-half years at the University of Kansas. I made real strides in terms of my athletic ability and I can’t thank them enough for that.

“I made some absolute friends for life and it was a fantastic opportunity for me.”

Then came the opportunity to move back to England with the lure of Liverpool – a chance too good to pass up.

“Once Liverpool got in touch, it was quite clear what my plan was going to be and it was an opportunity I definitely couldn’t turn down," Holland stated.

“It’s a move that has turned out quite well so far, I think. And for me, it’s just about pushing on and trying to improve as much as I can each day and help the team as much as I can because we all want to get back in the Women’s Super League.

“It was a great honour for me to get my first senior call-up for Wales recently and I’ve been saying to people it’s been a bit of a whirlwind for me in terms of signing for Liverpool and I didn’t expect my call-up to come so soon for Wales.

“I really enjoyed that experience of learning from some of the best players in the game and it’s one that will only help me develop further as a player.”

Holland believes she can continue to improve at Liverpool and sees a committed group of players all pulling in the same direction, with the aim of getting the club back to the top flight.

She concluded: “It’s an honour to play for such a big club and a club that is so well known worldwide and it’s supported so well.

“The one thing that I’ve taken from my time here so far is this team has a spirit in terms of we’ve got to fight for everything on the pitch when we put on that Liverpool shirt.

“Amber has instilled in us the values she wants to bring and I think she’s put her own stamp on it really well.

“The fans are so passionate about the team. I’ve loved that experience so far and we can’t wait to see them back with us in person at Prenton Park.”

Liverpool FC Women host Blackburn Rovers in the FA Women's Championship at Prenton Park on Sunday. Kick-off is at 6.30pm BST and you can watch the action as it happens with our free coverage.