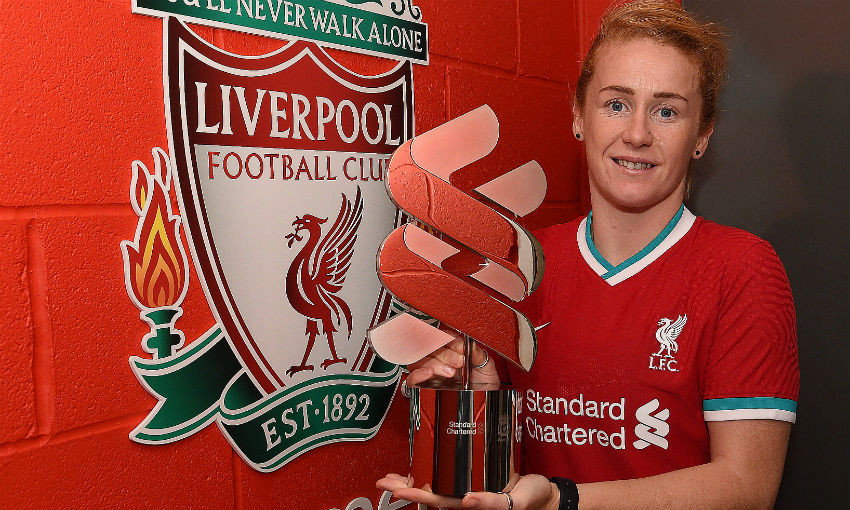 Rachel Furness has been named Liverpool FC Women's Standard Chartered Player of the Month for September.

The attacking midfielder scored four times during the month, helping the Reds claim two wins and a draw from their opening three games in the FA Women’s Championship.

An opener against Durham was followed by another goal versus London Bees and a brace in the 4-0 victory over Charlton Athletic Women at Prenton Park.

And Furness duly won a supporter poll hosted on Liverpoolfc.com to claim the first Standard Chartered Player of the Month prize of the season.

She told Liverpoolfc.com: “It’s always really nice to be recognised by the fans, it’s just a shame they weren’t able to be in the stadium with us to enjoy the goals. I wouldn’t say I expected to be scoring, I just want to be part of the team and help them get the three points.”

So, which of the four goals was her favourite?

“I’m not sure. Maybe the left-foot effort against Charlton. It was at a time in the game where it really pushed us on and I beat a couple of players, which I don’t normally do!”

The Reds are back in action on Wednesday when they host Manchester United Women in the Continental Cup, before they then visit Leicester City Women in the league at the weekend.

Furness said: “We’re up for the challenge. We want to play against the best teams and Man United have proved they are one of those in the last couple of years. And we know how tough Sunday will be.”

The Northern Ireland international was named Jepson’s vice-captain at the start of the season - and she’s enjoying the extra responsibility.

Furness stated: “I don’t think I’m doing anything I wouldn’t be doing anyway, either on or off the pitch, but it’s a great honour to help Niamh [Fahey] lead the team. I think I’m really thriving on it and I’m just really enjoying my football.”