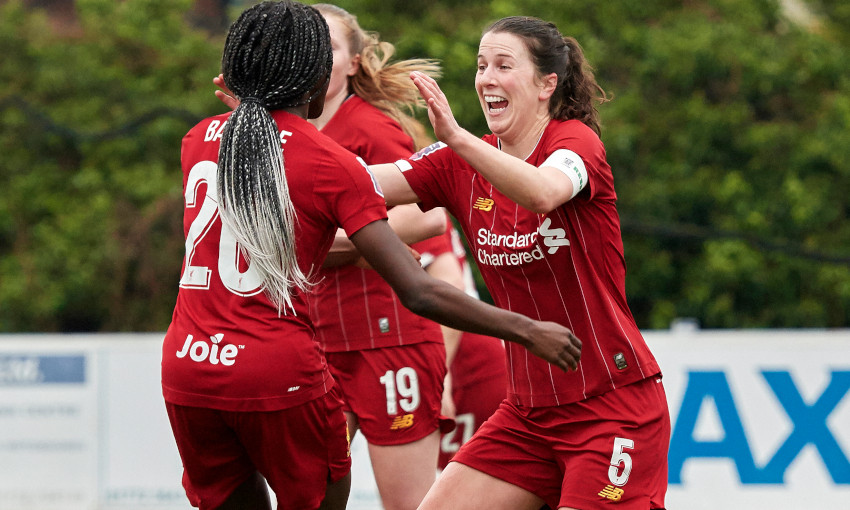 A magnificent four-goal haul from Rinsola Babajide and contributions from Niamh Charles, Niamh Fahey and Kirsty Linnett helped Liverpool FC Women beat Blackburn Rovers 8-1 in the fourth round of the Women’s FA Cup.

Four goals in each half were enough to see off the Championship side and put Vicky Jepson’s team in the hat for Monday’s fifth-round draw.

The Reds were almost ahead within a couple of minutes after kick-off when Melissa Lawley fed Charles, whose shot was parried away for a corner that Rachel Furness headed wide.

They didn’t have to wait long for the opener, though, as Babajide struck in the 10th minute, turning home a low finish after Charles’ cross had been palmed away by the goalkeeper.

Furness almost added a second when she met a Lawley cross with a firm volley, but the effort dropped just wide.

Free video: Highlights of the 8-1 win

It was a mistake from the Blackburn goalkeeper which brought the second goal on 16 minutes, as Lauren Perry spilled Jade Bailey’s free-kick and captain Fahey was on hand to turn the ball home.

The two-goal lead lasted barely a minute, however, as the referee adjudged Jemma Purfield to have fouled Rovers’ skipper Saffron Jordan inside the area.

Ellie Stewart fired the penalty low past Anke Preuss, with the goalkeeper guessing right but unable to reach the spot-kick.

Perry saved well from Babajide and then tipped a superb Charles shot from distance over the bar as the Reds looked to restore their two-goal advantage.

A superb team move saw Furness release Charles on the left and when she delivered a cross, Furness was there to meet it but a defender produced a brilliant block.

The pressure was building and a lovely piece of skill brought a third goal for the Reds just after the half-hour mark.

Purfield’s cross from the left was headed down by Furness before Babajide met the knockdown with a perfect volley, which flashed past Perry for her second of the game.

And the lead was three at the half-time break when Lawley, a constant threat on the right, popped a lovely ball across goal for Charles to turn it home from close range at the back post.

The Reds continued to dominate in the second half and Babajide completed her hat-trick just after the hour mark, firing home a low shot from inside the box.

Substitutes Linnett, Jess Clarke and Courtney Sweetman-Kirk were then introduced to the tie as the Reds looked to hand minutes to all their outfield players.

Linnett was denied by Perry after connecting with a header from a Clarke cross, while the offside flag denied the Reds a sixth when Sweetman-Kirk pressured a defender into an own goal from Babajide’s dangerous cross.

It was Babajide’s day, though, and she made it 6-1 on 88 minutes, firing home low from the edge of the box.

There was still time for Sweetman-Kirk to hit the post after more good work from Babajide before the seventh goal arrived in the last minute of the 90.

A clever ball from Amy Rodgers released Linnett and she proceeded to finish emphatically beyond Perry.

In injury time, the scoring was completed when Babajide fired a ball across goal and a Blackburn defender turned the ball into her own net.