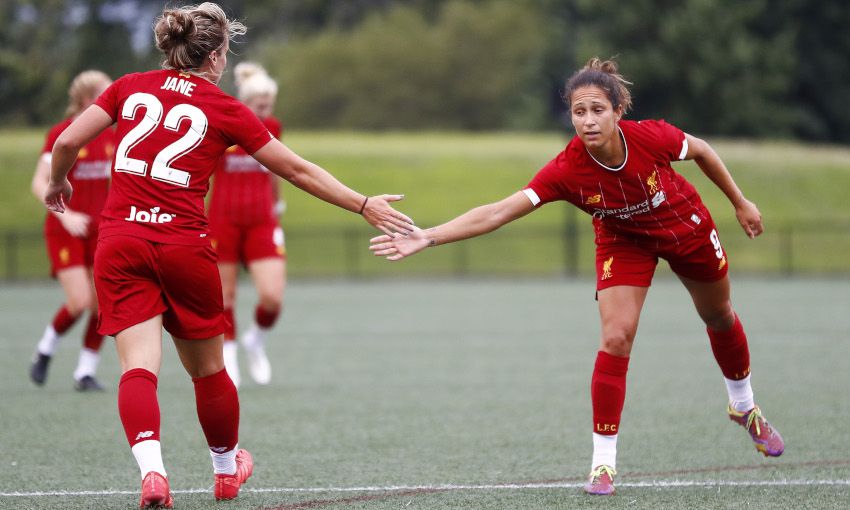 'It's amazing travelling alongside the first team in the USA'

The forward struck a hat-trick inside the opening 40 minutes in Boston, with Rinsola Babajide also on target in an incredible first half for Vicky Jepson’s team.

Babajide grabbed a fifth goal shortly after the re-start before Sweetman-Kirk netted her fourth with five minutes remaining to cap an impressive showing from the Reds.

LFC Women had kicked off their United States tour with a 2-2 tie against Cleveland Ambassadors in Notre Dame last week, with Sweetman-Kirk’s late strike salvaging a draw.

And the striker picked up where she left off by setting the ball rolling in the seventh minute when she tapped in following sterling play from Babajide to create the opening.

Four minutes later, Sweetman-Kirk was on target again, this time guiding a header over the goalkeeper from Jemma Purfield’s centre.

By the quarter-of-an-hour mark, it was 3-0. On this occasion it was Babajide on the scoresheet with a wonderful solo effort which saw her dance beyond several opposing defenders and drill home.

There was no sign of the Reds letting up, either. Sweetman-Kirk wrapped up her hat-trick prior to the interval, clinically converting Melissa Lawley’s delivery into the box.

The scoring continued into the second half, too. Babajide added the fifth by diverting another Lawley centre beyond the goalkeeper on 52.

Soon after, Reds supporters gathered at Harvard were treated to the welcome sight of Jess Clarke returning to action for the first time in pre-season following injury - and she almost marked it with a goal, striking against the post.

Nevertheless, with five minutes left Sweetman-Kirk notched once more as she was picked out by Purfield’s cut-back and finished with typical aplomb as LFC Women completed the final match of their USA tour in style.