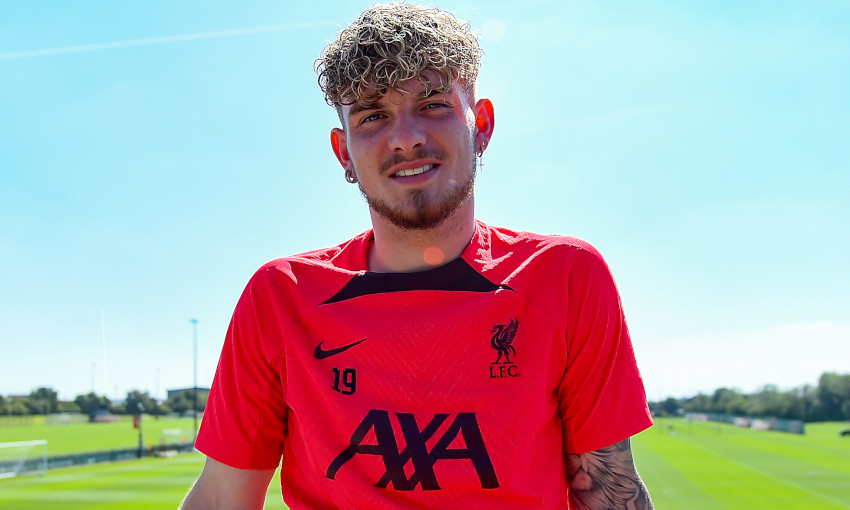 Harvey Elliott is aiming to create more memories at his boyhood club after signing a new long-term contract with Liverpool.

The No.19 put pen to paper on fresh terms at the AXA Training Centre on Thursday to extend his spell at the Reds, which began in 2019.

Elliott has made 22 senior appearances so far, having stepped up into Jürgen Klopp’s first-team ranks last season following a successful loan spell at Blackburn Rovers.

He helped Liverpool to two major trophies in the 2021-22 campaign, netting a penalty in the Carabao Cup final shootout and aiding the Reds’ Emirates FA Cup triumph.

Elliott is now hoping to have an even bigger impact for Klopp’s men in the coming seasons at Anfield. Read the full transcript of our chat with the 19-year-old below... 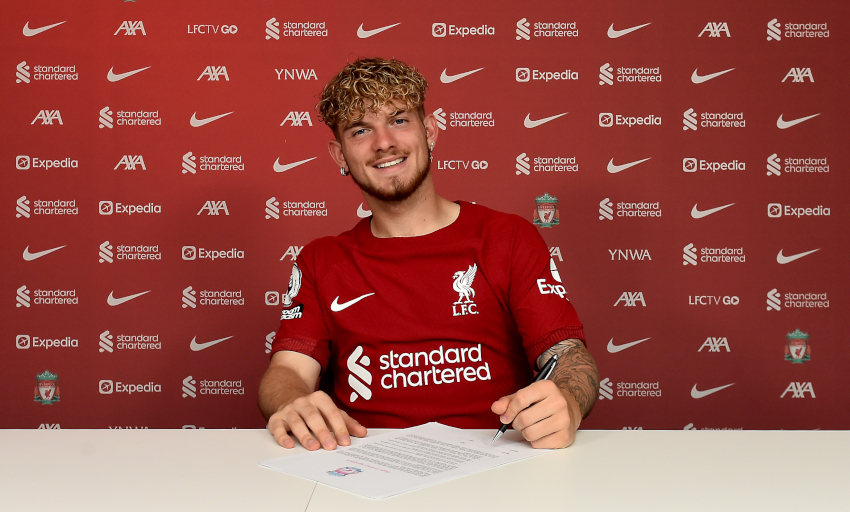 Harvey, congratulations on signing a new long-term deal. It must be an incredible feeling to get this done?

It’s a year on from your last new contract, which you signed after that great loan spell at Blackburn Rovers. Does this one feel any different?

Definitely. I feel like it’s, not more pressure on me, but it’s more of a situation where I’m sort of more of a first-team player in a way than last year because obviously [I was] coming back from loan and I didn’t play in the first season I joined as much as I have done in this past couple of years. So yeah, it feels more of a contract now and a first-team contract in terms of me and how it’s going to run in these next couple of years. I’m just very excited to keep putting on the shirt, to keep playing. I’m so excited and I just can’t wait to get out there again.

It’s been a rollercoaster journey for you since you arrived here three years ago, it’s had a little bit of everything…

Yeah, it has done, to be fair. It’s been a big rollercoaster for me and my family and even for the club. So much has happened in the years that I have been here. We’ve already won so much and hopefully we can win so much more, so just to know that I am going to be here for a long time again, as I said it’s always a wonderful feeling for myself and my family being Liverpool supporters, so there is no better place in this world to be than playing for Liverpool and to put the shirt on and go out and play for the team and the fans. I’m hoping there are many more memories to come with it but I’m just so excited to put pen to paper and stay here for a lot longer.

You have mentioned that you are a Liverpool fan – does that bring pressure when you move here from a different club?

I think so. It was just more the pressure of meeting everybody, I mean obviously going from watching them on TV and watching your idols play for Liverpool on TV to meeting them in person, it’s a whole different situation and for me I would say I was more scared than [feeling] pressure, to be honest. It was just one of them, from watching Mo Salah, Virgil van Dijk and Jordan Henderson on TV to actually sitting by them or standing next to them, to this day I pinch myself [to see] if it’s real. I wouldn’t say it was more pressure but more scared and excited because obviously I wanted to show them that I was an OK football player and wanted to sort of get their help, and obviously they’ve been brilliant since I first joined. So to be here with them now and to share more pitches and to be on the pitch with them for a few more years, it’s amazing for me.

What’s different from the 16-year-old who arrived here to the 19-year-old you are now?

More mature, I would say. I’ve had more experience playing professional football and men’s football. I mean, the love for the club was already there from the start, it’s just how I apply it and show the fans and show the club how much it means to me and just wanting to go out and 100 per cent work for the team, work for myself and for the fans, just give it my all. That’s been my drive over the past couple of years since being here because I knew how big of a club Liverpool is but to see the fanbase all around the world… I think Asia just topped it off for me and no matter how far away they are from England, Liverpool is just loved all around the world. So to be able to have this fanbase, there is no better place to be and to play for… it’s just unbelievable experiences that last a long time for myself and my family and as I say, I hope there are more to come.

Yeah, definitely. I mean, even to this day when they could think ‘He is one of us now’ they are always looking after me, they are always helping me out, helping me be a better player and a better person, which is what you need in the club. You come here to be a better player but at the same time you want to grow as a person, you want to grow as a human being. The gaffer and the coaching team and the players, there are no better people to learn from and look up to in this world than these players. I want to have a career as some of these players have, I want to play as many games as some of these players have. If you look at Millie, I think he’s the oldest in the team and he is still going strong and probably the fittest in the team. He’s just a prime example of what this club brings and the human beings around here so yeah, it’s unbelievable to be around these players and these people and they have helped me a lot along the way. 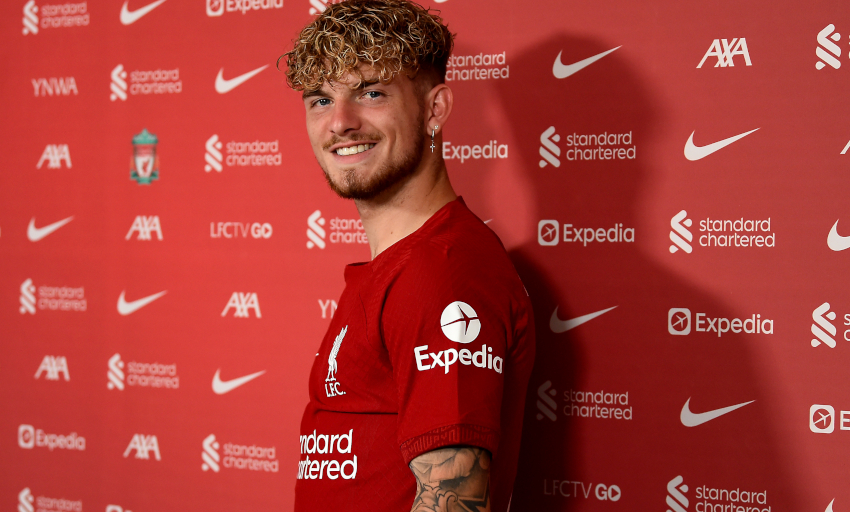 Is there a standout example that a certain player has done, or somebody that has taken you aside in a session and offered you that bit of advice?

To be honest, all of them have done it. They’ve all helped me along the way. But I think I’d say more Salah and the skip, to be fair – Hendo. Just because I’ve been playing on that right side now, it’s more kind of in their positions and around their playing qualities. So, for me, it’s them two have helped me out and brought me aside and said you need to do this, or you can try this. Especially Mo, he’s always giving me different things to work on. He’s always telling me to follow him in training or follow him in the gym so he can help me out along the way and stuff. I mean, everyone, as I said, has done it in the journey so far and they’re all willing to help whoever. Whether it’s Milner, who is the oldest here, to the youngest player in the team. It’s one of them, no-one feels left out and everyone is here to help them out and bring them up.

Does this feel like the biggest season of your life? They all will, but this season in particular?

I think so. I think for myself, personally, I have a lot to prove and the team has a lot to prove. Last season, unfortunately, we didn’t win the Prem or the Champions League. We were so close to doing it, it was unfortunate for us, but I think for the team and myself it’s a big season. It’s always going to be a big season. No matter where you go in your football career a season is going to have a lot of ups and downs and a lot of pressure. It’s just down to you whether you can handle it and make sure you perform under this pressure, especially at Liverpool. It’s such a big club, there’s world-class players around the team so there’s no room for slacking or not performing to the best of your abilities, so there’s always that in the back of my mind. At the same time, it’s always a pleasure and it’s always a dream of mine to play for Liverpool so that’s why I’m always trying to give 110 per cent and always trying to go that extra mile just to give to the fans [and] show how much Liverpool means to me and how much I care about this team.

You say you have a lot to prove, what is behind that? Is it the pressure that comes with being a Liverpool player, or is it looking back to the injury?

I think a bit of both, to be honest. The pressure of being a Liverpool player for starters – it’s one of the best clubs in the world, if not the best. So, people just assume that everyone is [a] world-class player, which they are. With that comes a lot of pressure. And, yeah, with the injury. Obviously I started off the season well and then the injury came, and I wasn’t really at my best. Just for me personally, I want to get back to my best. I want to make sure I can show the world and show Liverpool and everyone involved that I can still play and the injury has passed me and I’m feeling 100 per cent. It’s a big season, I’ve just got to make sure that if the opportunities come, I just need to take it and just enjoy it as well. The injury came and I was in a dark place and a bad place, so it’s just not taking those opportunities for granted and making sure I take them with both hands and perform to the best of my ability.