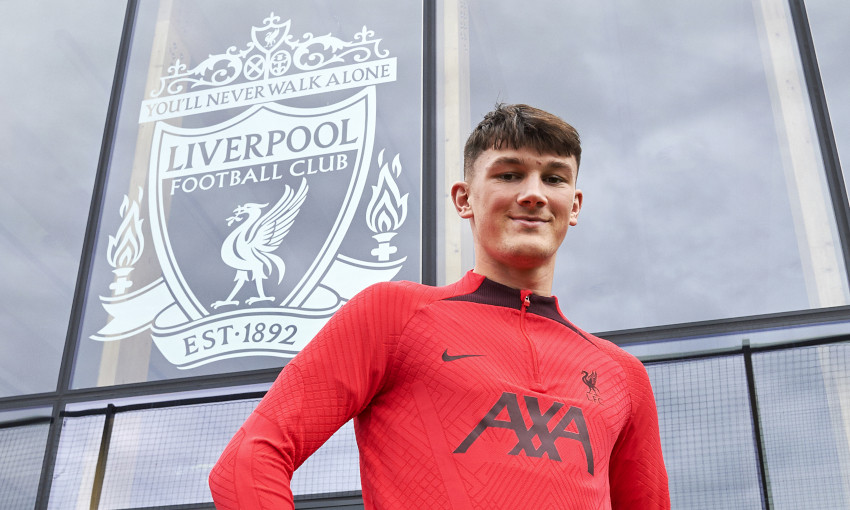 Calvin Ramsay revealed his decision to join Liverpool was massively influenced by the club's reputation of providing the platform for young players to flourish in the first team.

The 18-year-old full-back has signed a long-term contract with the Reds after arriving from Scottish Premiership side Aberdeen, with the transfer subject to international clearance.

Speaking exclusively to Liverpoolfc.com at the AXA Training Centre, Ramsay detailed his excitement at playing for the team he's supported since an early age, while looking forward to the prospect of continuing to hone his skills under Jürgen Klopp's guidance.

Watch our sit-down interview with Liverpool's new No.22 here, or read on for a full transcript…

Calvin, congratulations, welcome to Liverpool. How does it feel to be here and a Liverpool player?

Thank you very much. It's special, to be honest. I came down yesterday and had my medical today and my first look around the training ground, so it's been brilliant. The facilities are unbelievable and all the staff already have been so kind to me and it's a pleasure to meet everyone. I'm looking forward to it.

A lot can happen in football, can't it? You hear of interest, things don't go that way – but when you knew it was Liverpool and you knew it was time to come here, how did you feel then emotionally?

Because I did well at Aberdeen, there was a lot of speculation, especially in January. But as soon as I heard the speculation from Liverpool, I just wanted to get it done, I knew that's the club that I wanted to go to. So finally, we're here, managed to get it done and I'm just buzzing, over the moon to be here. I can't wait to meet the fans and get started and show everyone what I can do.

Tell us a little bit about that then, because Liverpool fans are very studious – as soon as they heard your name, they were researching you on the internet, lots of things have appeared on social media. But for those that haven't, how would you describe yourself, what is your style?

So obviously I'm a right-back, pretty attacking, I like to attack. I'm OK defensively as well but my main attribute is attacking – I can put good crosses in, I like to get shots away, both feet, cutting inside, going down the line, linking up with my winger. But just mainly I like to work hard, work hard for the team, put in a shift. I'll try to do my best for the club and I'm looking forward to it.

The modern-day right-back is probably very different to the way when you started as a young boy as well, and one player who has kind of redefined that position is one that you'll be coming in to learn from as well in Trent Alexander-Arnold. How excited are you about that prospect?

Definitely. He's a massive player, he's been brilliant so far. I watched him the whole of last season and just the way he plays, I think it's almost similar to me [in] the way he attacks and stuff like that, we're both still young. But he's an unreal player. So to be coming in here and learning off him, it's just going to be amazing for me and I'm going to learn a lot. It's going to be tough, it's going to be a challenge but it's one that I'm up for and hopefully I can go and challenge to get into the starting XI.

You won the Football Writers' Young Player of the Year award in Scotland. I think you mentioned Trent Alexander-Arnold in some of the interviews that you did afterwards. Why was that, why is he somebody that was already important before you moved here to Liverpool?

Because obviously he's young and he's just been brilliant  – everyone in football knows that. And because I'm in a similar position and there was a bit of interest from Liverpool at the time. Even before there was interest from Liverpool, I looked up to him because he's similar to the way that I play, like I said – his attacking, his crossing, he can use both feet, his passing range is obviously quite similar to mine. Just being in here every day with not just him, but all the players, they're top professionals and I'm going to learn a lot and become a better player.

Is his journey fairly similar to yours as well? You played in midfield and it's been documented quite heavily that this helped become the player he is today – that he played further up the pitch...

Definitely. I think I'm quite versatile as well, I can play in a few different positions. I started off in midfield, coming through [the] Aberdeen youth academy, and then I got moved out to right-back. My first game was against Chelsea in a tournament, so it was a difficult game to go right-back for. But I did well and I've played right-back ever since. I can play a few positions, I think I'm quite composed on the ball, can find a pass, get shots away. So, I can play centre-mid, right-back, right-wing – anywhere really.

You grew up as an Aberdeen fan but your dad's let us into a little secret by seeing some of the pictures where you were at Anfield as a two-year-old. Are there any links within the family or group of friends that have led you here emotionally?

Obviously I support Liverpool. I was here when I was young and I can remember it well. Obviously my dad showed some photos, which I don't really want to be seeing! But it's a massive club and it's an unbelievable feeling to be here and I'm ready to get started.

Tell us about that start then as a Liverpool fan – who were the players you used to watch on TV?

I know I'm a defender but I quite liked Luis Suarez when he was here. I thought he was brilliant. I'd say him, he was a big one. Obviously Steven Gerrard as well, he's a legend here. So, hopefully I can go on and make my mark as well.

You've spoken about one full-back, on the other side of the pitch, on the left-hand side, is the captain of your country at the moment. He's quite different to Trent in many ways but, again, he'll be someone that you'll be desperate to learn something from when you come here...

I'll learn a lot from him as well. Obviously he's Scottish – same as me – and I've seen a lot of him as well because of Liverpool and Scotland as well. So, I'll be looking to learn off him. He's a great full-back. The way he gets up and down, his energy, he can attack, he can defend, I think it's something I can definitely look forward to coming in and learning from players like that. Obviously I need to learn a bit more defensively, I can learn from them two as well. I'm excited.

His route from Dundee United went via Hull City. Almost the pressure is different for you, isn't it? You come from Aberdeen straight to one of the top clubs in the world at the moment. How do you feel about that? Do you feel the pressure, or is this just something you feel is an opportunity for you?

Not really, to be honest. I think I'm quite calm and that when I get on the pitch. I'm quite calm and composed. Because I've done well at Aberdeen, I sort of knew that the speculation would come. But I'm just buzzing and it's a dream come true really to be here. It was a dream come true to play for Aberdeen, and now to be at one of the biggest, if not the biggest club in the world, it's a massive achievement and I'm looking forward to trying to show the fans what I've got. Hopefully I can come in in pre-season, show everyone at the club, the staff, players what I've got and then we'll see what happens from there.

That bedding-in period is going to be important as well, isn't it? That you get that lead-up. It's not like you join halfway through a season. You get to know the lads, you get to play in the pre-season games before you go into the real thing...

Definitely. It'll be good. It's obviously going to be a challenge but I'm just looking forward to meeting the guys, I'm sure they're all brilliant guys. Training with them, I know it's going to be tough but I'm always up for a challenge.

It's obvious the attraction why a young player would want to come to Liverpool, but there's a very obvious route here for young players as well. It's not like you come here and then you move on. You've got a manager that will give young players, if they're good enough, a chance...

Definitely. There's been a lot of young players that have played – the likes of Trent and Harvey as well, there's a lot more. But there's obviously a pathway here – that's one of the reasons I chose it as well. It's not just a massive club, they give young players chances in the first team. So if I can come in in pre-season, put my mark down, then there's no reason why I can't push to get in the first-team squad. 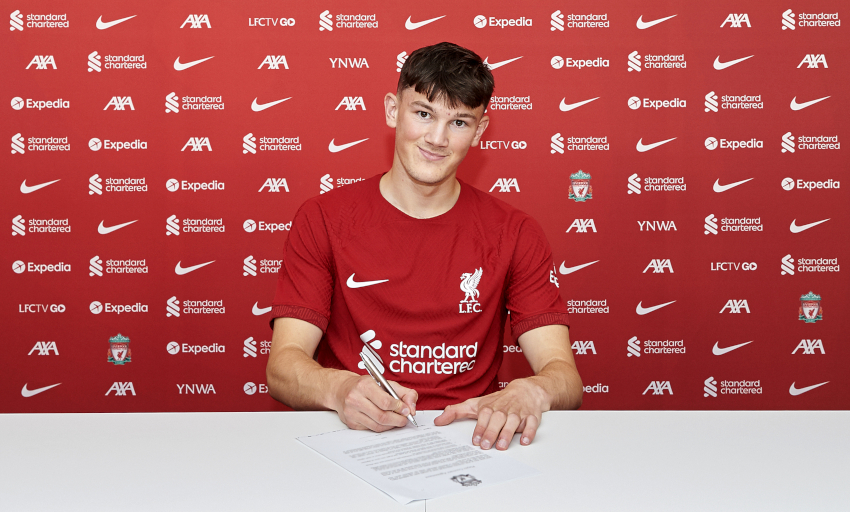 Obviously the manager will be a massive pull for any player. You'll get that big hug very soon and he will tell you what he expects from you as a Liverpool player. But how excited are you to work with him?

I'm very excited. He's a top guy. Obviously I've seen his hugs on telly and that, so hopefully I'll get one of them. But he's a top manager, one of the best ever potentially, so it's going to be special to work under him and I'm looking forward to meeting him.

Obviously it's the biggest league in the world but the standard is very high – but I think I can compete with that. I've got the qualities, I'm technically quite good, I like getting on the ball, receiving the ball, going at people, linking up with players. So, there's lots of things that I can benefit from if I get into the Liverpool team and hopefully play in the Premier League. So, it's exciting times ahead, for sure.

People look at your age and think, 'He's a young player.' But you have great experience for your age. It was 39 appearances for Aberdeen in all competitions, so what did you learn from that?

For being so young, I've played quite a lot of games at Aberdeen. I'd also say I'm quite mature, to be honest. To go in and be as consistent as I was in Aberdeen, obviously it's not easy but I've dreamt of it all my life, playing for Aberdeen, and I knew once I got the opportunity I just needed to take it – and that's what I did. Hopefully I can go and do that here as well.

Now you've got the shirt on and it's become real, have you thought about what it will feel like to run out at Anfield?

Just finally, what will a dream season look like for you next year?

I'd say just to make my debut. I think making my debut will be special but obviously the more appearances, the better. But the main thing is just to get on that pitch at Anfield and try to put my marker down, show everyone what I've got, like I've said. Hopefully I can do that.