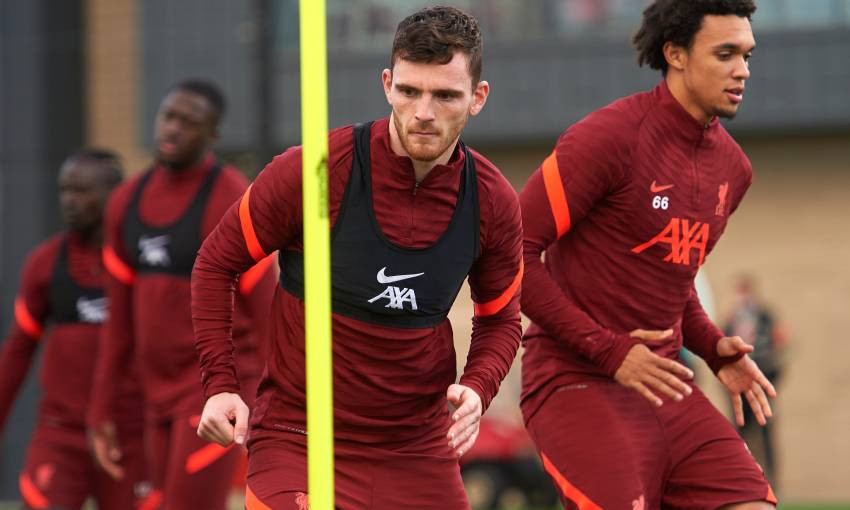 The Reds are out to positively follow up last weekend's victory at Manchester United in the Premier League when Graham Potter's side visit Anfield on Saturday.

Liverpoolfc.com caught up with the left-back at the AXA Training Centre to preview that encounter and reflect on his pep talk to his teammates when they were 5-0 up at Old Trafford. Read on for the interview...

It's been quite a week. Progression to the quarter-finals of the Carabao Cup and obviously last Sunday at Old Trafford which was next level – are you back down to earth yet?

Look, we enjoyed it, of course we did. But I think straight after the game we were very much, 'Let our fans enjoy this one, let them have the bragging rights and everything that goes along with it.' But for us, we were fully focused on the next game. That's what's worked best for us in the last five, six years under this manager and that's what will continue to work well for us. It was enjoyable and Sunday night was a good one, slept easier and everything like that and not many regrets lying in bed about the game, which is always good. But Monday morning, we were straight back in here and it was business trying to prepare for the Preston game as quickly as possible.

In the United game, there was footage of you after Mo Salah scored his third goal, saying, 'Keep going, keep going, be ruthless.' That was a real insight into the mentality of this squad...

That was the message from everyone. Probably the camera just picked me up saying it at that time. We wanted to keep going, we wanted to keep playing our own game. Our game is causing teams problems at the back. Obviously when you get to 3-0, 4-0, in fact the clean sheet then becomes unbelievably important. Alisson would have never forgiven us if we'd never kept one, and same [with] the defence. The lads up top had their fun and got their goals but we needed their help for us to be satisfied with a clean sheet, which we managed to do. But it's also, 'Don't stop doing what you're so good at, don't stop going forward.' We had so many dangerous players on the park that day that were causing problems and it was about trying to get as many goals as possible, because we want to do that in every game. Of course, it isn't possible to do that every game at times and it's important to just sometimes settle for 1-0 or 2-1 in different games like that. But we felt we could create more chances, which we showed. We were ruthless that day. We took the chances that we created and luckily the result was favourable for us.

It'll be nice to be at Anfield on Saturday. It feels like there's been so many away games recently...

It feels so long ago. The Man City game was the last game before the internationals and then we obviously went all around the world and played games. Then we've had a run of away games. But the results have been fairly good, so hopefully that continues. It'll be good to be back in front of the home crowd. We've missed them but I hope they've enjoyed the away performances, and it's important that we do similar on Saturday because we'll need that standard and level of performance to get anything off Brighton.

Brighton find themselves in a decent position in the table and gave you a couple of really tough games last season, didn't they?

Brighton are a really good team under the manager they've got. They play exciting football, have got really good players that can handle the ball. Last season, we obviously drew away from home and then they beat us at Anfield when we were in that bad run. Look, we know how tough it is to play against them but it's important we try to play our game and play as well as we can. If we do, then hopefully we can take more points off them this season than we did last season – and that starts on Saturday. We know how good Adam Lallana is as a player and we know how good he can handle the ball. He's one of their main men and a close friend of all of us. I hope he gets a good reception at Anfield but hopefully we've done our job first and hopefully we've won the game when he does get that good reception because he certainly enjoyed his win at Anfield last season, and rightly so. They were fighting down the bottom and that was a huge three points for them. But hopefully we can get one over on him this time and we can give him a hug at the end of the game. Obviously he's not played in front of fans since he's left and I hope the Liverpool fans give him a huge reception, which I'm sure they will, because he's a legend at this club and he'll certainly deserve any reception he gets.