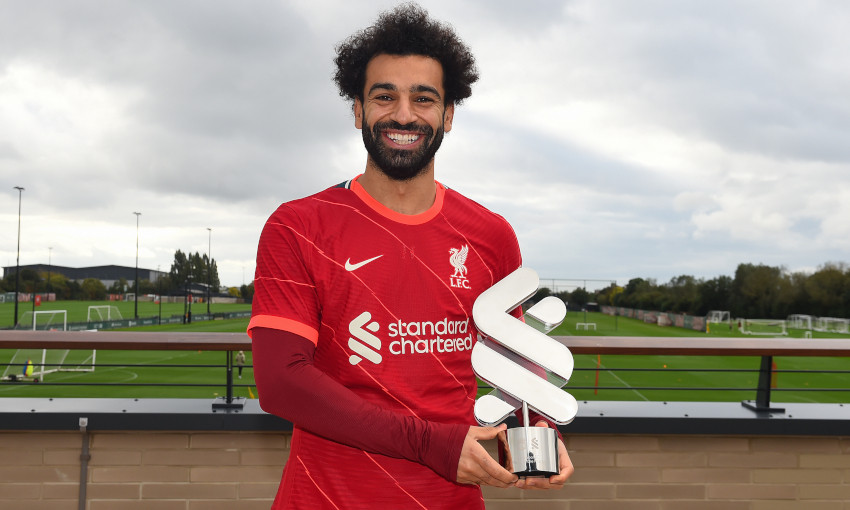 The Egyptian claims the prize for the second consecutive month, ahead of runner-up Curtis Jones, after a fan poll on Liverpoolfc.com.

Salah scored six goals in his five appearances during the month to help Jürgen Klopp's side maintain an unbeaten start in the Premier League and Champions League.

Upon collecting the Player of the Month trophy at the AXA Training Centre on Thursday, the No.11 said: "I'm happy as long as the team keep winning.

"I'm trying to help always, to score goals and make the team win games – that's the most important [thing]."

Salah began the month by netting his 100th top-flight goal when he opened the scoring in the 3-0 victory away at Leeds United.

Finishes at Anfield against AC Milan and Crystal Palace then followed, before a second-half goal away at Brentford saw Salah claim 10th spot in the club's all-time scorers list.

And to conclude the action in September, the forward bagged a brace in Portugal as Liverpool recorded a 5-1 win at FC Porto.

Read the rest of our reaction interview with Salah below...

You scored six goals during the month, three in the Premier League and three in the Champions League. Which was your favourite?

Maybe I choose Milan. [It's] the first time I scored against them in the Champions League. Also, we were 2-1 down so it was an important goal to get us back in the game, so I can choose this one.

In terms of records, you got your 100th Premier League goal and then also became the fastest player in Liverpool history to reach 100 top-flight goals. How proud does it make you feel, to break those kinds of records?

We're going to talk about your goal against Manchester City, even though it wasn't September. Talk us through that and how you navigate yourself into that position to take that strike…

The atmosphere was great, that's what makes it more special: the fans, the Anfield atmosphere. We enjoyed the game; not in our top performances but in the second half we struck back and the atmosphere helped us a lot to play a good game.

Looking at the Premier League, it's extremely tight at the top. How would you assess the season so far for the team?

We have to give our best always to win something and I think we have the quality for that. We have a top team, so we have to push ourselves to the limit and try to win something. I'm sure everybody thinks the same. That's what we need, just to keep in our head that we finish the season winning something.

It's Watford this weekend, a team you have a great individual record against. Is that something that enters your head or is it just the here and now?

Sometimes yeah, but I'm just looking forward – we have a few days to prepare and I'm so excited for the game.