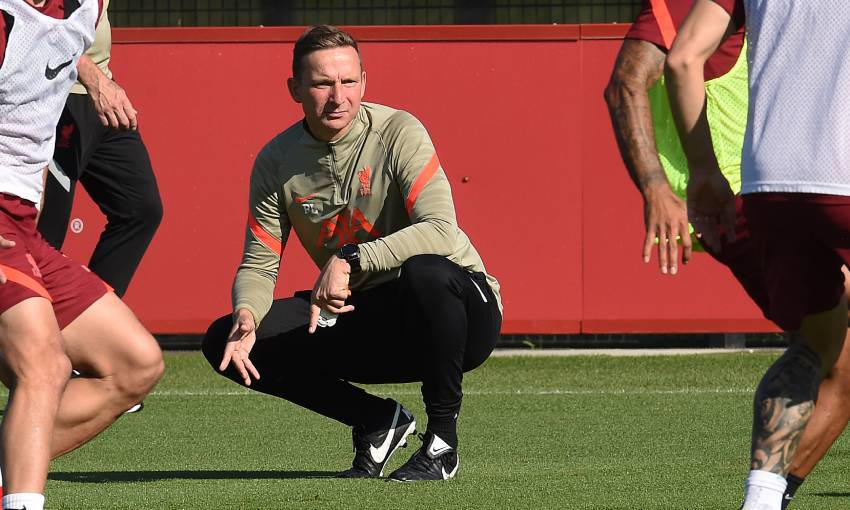 Liverpool will be going all out to add the 2021-22 Carabao Cup to the club's honours list, Pepijn Lijnders stressed.

Jürgen Klopp's men begin their journey in this season's competition away at Norwich City on Tuesday evening in a third-round tie.

And the Reds' assistant manager detailed the squad's ambitions ahead of the trip to Carrow Road in a conversation with Liverpoolfc.com at the AXA Training Centre – read on for the interview…

It's the start of a new competition during a really busy period. What are your plans for team selection?

If you want to talk about team selection, you have to understand our way, our identity, our culture – what already started a long time ago. We want to compete in each game and in these intense periods where you play each three days, it's really important to, one, protect the players because it's a high risk to play again and again and again. And second, if you want to compete in the way we want to compete – with chasing the opposition and having fresh legs and having a fresh mind, having a fresh heart, having fresh lungs – then it's important that you use energisers, [what] we call them, so players who come in and inspire the others with their game. So, that's what we are going to do tomorrow and what we are doing in the last week as well.

As we've seen in the past, this competition can be absolutely massive for youngsters and players who maybe haven't played much, isn't it? A chance to impress and show what they can do...

I think our team is hungry, our squad is hungry to compete in each competition, and this is one of them. I think everybody says we don't like these competitions but we like [it] because I feel this generation of players, this Liverpool team, deserves to fight as well for the national cups. We lost against Chelsea three years ago, two years ago we won the [Club] World Cup instead of playing the League Cup, and [last season] we lost to Arsenal on penalties, and everybody knew last year we created chance after chance against them. It's not that we don't like it. There's need and just a matter of logic by using other players. It's gold for young players, proper gold, because we like this competition to introduce new players – and that's why I have to say that Curtis, he's going to start tomorrow as well and it's his 50th game for Liverpool. That all started with this cup.

I like how we constructed our squad with talent, with experience and in these moments we combine both to give a real impulse in our playing style. I always say that the more games we play, the better – because it's a chance to develop, to become better. For example, our Champions League group, everybody is saying, 'So strong, the group of death' and all these things. I only can think we have six games where we only improve because you need top, top games to improve. So we will become better as a team, as a squad and that's what we need because our group is full of potential but we need to develop to win.

In general, how would you assess the team's start to the season so far and what will be the challenges going forward?

The challenge is always the next game in front of you, so we don't look any further. Now it's all focus on Norwich. A start is only a start. It means not that much – one is results, the other thing is performances. I really believe that the way we are setting up the team, the way the players are showing the mentality to score, to attack, to attack each game, I really like. That has to stay and that's our job, of course.