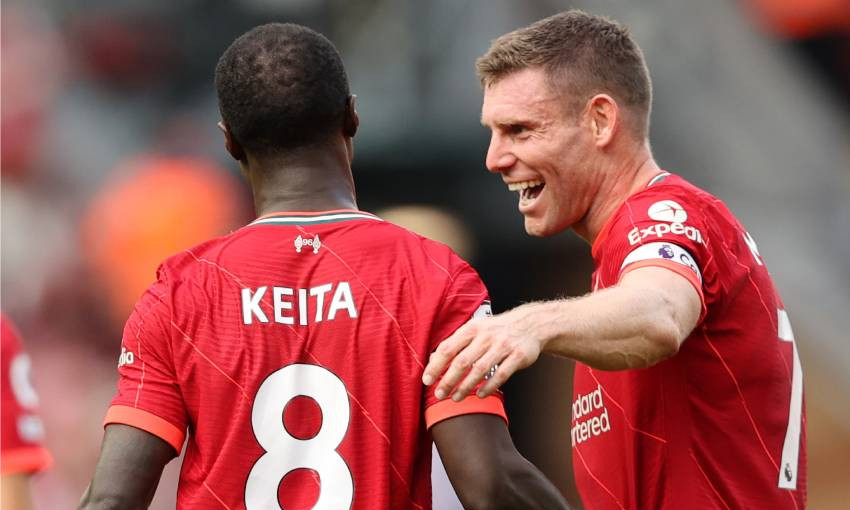 James Milner was very pleased with the manner in which Liverpool secured three points against a tricky Crystal Palace side on Saturday afternoon.

The Reds beat Patrick Vieira's team 3-0 at Anfield courtesy of Sadio Mane's 100th goal for the club and second-half efforts from Mohamed Salah and Naby Keita.

Milner played the entirety of the Premier League contest at right-back, deputising for the ill Trent Alexander-Arnold, and expressed his delight at the win and clean sheet.

Read on for Liverpoolfc.com's post-match interview with the vice-captain…

It was a good performance. We know we can play better. It was a performance where changes had been made obviously and a performance [following] a big midweek game. So, we know we can play better but they're the ones you have to grind out, and we managed to do it. It doesn't look like we grind it out really when it's 3-0, you see some of the goals we scored, which were fantastic, but they had chances which we'd like to stop obviously, Ali had a bit of work to do. There's stuff to improve on but I think we can be very pleased with the clean sheet. Three good goals and some minutes for some players who probably hadn't played too many this year.

You filled in at right-back today – how late did you find out that was your position for the afternoon? You were up against Wilfried Zaha, who is one of the toughest opponents in the Premier League...

Trent's definitely going to get some ribbing for that! A bit of Zaha-itis or something like that! It was probably three, two-and-a-half hours before the game really. But that's what we're prepared for and the training is done so anyone is ready at any time. That's my job when I'm needed.

One-hundred goals for Sadio – very few people have done that in a Liverpool shirt. What kind of contribution has he made to this club?

It's impressive. Obviously all the boys up there do so much for the team – not only goals. Assists, working for the team off the ball and how we play and press, we couldn't do it without the front boys starting it off. But Sadio has great quality, scored all types of goals and very important goals as well. Pleased for him because he's such a good player and he deserves the accolades he gets.

We know you won't look at the league table at the moment, but it's a brilliant start...

I think the thing we need to look at as a team is the momentum factor and the results and the clean sheets. The clean sheets are so important – it's such a great habit to get into. Obviously there's games where you're not playing so well and you get to nick one goal if you're keeping that clean sheet – it's massive and obviously the difference between two points. We need to keep doing that. We had a bit of luck today but at times you deserve a bit of luck and hopefully we can keep that going.

Rest is going to be important and using the squad, but I suppose you're desperate to play midweek...

You want to play every game obviously. We'll see what the manager does. I'm sure he'll make changes but this is what the squad is here for and all the games we have. It is a strange period in the season. Obviously the first few weeks you don't have any midweek games and then maybe the manager can't rotate as much as he's going to later on. So, it's important for the players not playing as much to be training well and be ready mentally. It is a tricky period because you've had an intense pre-season and then obviously not too many minutes, but that's what we're prepared to do. We're getting into that period now where you have a game every three days and the manager will change a lot, and then another two international breaks. It's tricky but it's tricky for everyone. We're used to it now but hopefully we can keep this momentum going and keep churning out the results.