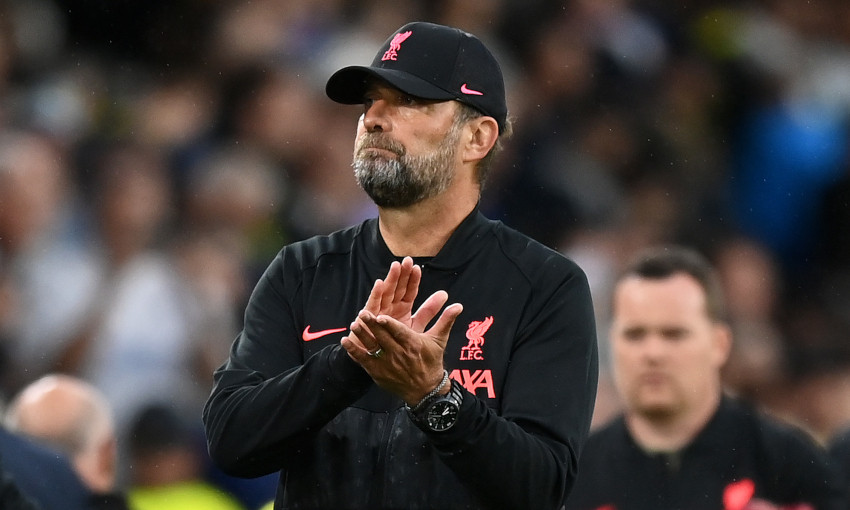 Jürgen Klopp was impressed by the way Liverpool executed their game plan to achieve a ‘convincing’ 3-0 victory over Leeds United on Sunday.

The Reds made it 10 points from a possible 12 this season as they returned to Premier League duty at a capacity Elland Road, with goals from Mohamed Salah, Fabinho and Sadio Mane securing the win for the visitors.

Analysing the performance of his side at his post-match press conference, Klopp felt even more clear opportunities could have been created but was encouraged by Liverpool’s assured overall display in defeating a fiercely backed home team.

“Our idea was to cut out [Kalvin] Phillips, which is important; to cut out the passes they usually want to play, how they want to find him in the centre. That took a little bit of their game plan away or whatever.

“In our case, I think we had a lot of moments where we won the ball and then we were obviously [in a] quite expansive formation we have in possession and we used the space quite well to set our own attacks.

“But, how I said, without intensity it’s not possible, this is not a game you can play nice like chess – you have to throw everything on the pitch to make little advantages. We did that. That’s what I liked most about the game, that we were really ready – for the atmosphere today, the intensity Leeds are asking for. It’s a really tough place to come and we did really well.

“We played here last year and now a third time, this obviously was the most convincing performance so far. Last year we won at home, yes, it was more spectacular. And an away game here without a crowd is obviously a completely different cup of tea, it was 1-1, it was not even close to as good as we were today.

“So, yes, I’m happy with the performance.”

The success in Yorkshire meant the Reds kept pace with the early leaders in the Premier League, joining Manchester United and Chelsea at the summit.

Asked how close his squad is to regularly reproducing the kind of form that gained Liverpool the title in 2019-20, Klopp said: “I’m not interested in the form we had when we won the title, I am interested in the best possible shape we can have now, and I don’t even know it.

“So, obviously we played a really good game today, but it was necessary. To play a little bit worse, a little bit less good, then Leeds will punish you. You saw that. I think after two minutes there were already two or three counter-attacks on both sidelines, runs box to box, that was the outlook for the game. It was clear it would be really tough.

“But then we pressed exceptionally well, that’s why we won a lot of balls, that’s why we could play from there. It was, of course, far away from being perfect; we scored nice goals but we should have had more clear-cut chances.

“We had a lot of finishes – 30, I heard – but we should have had more clear-cut chances. But that’s no problem, today 3-0 is brilliant. But we know we have space for improvement and we have to do that.”