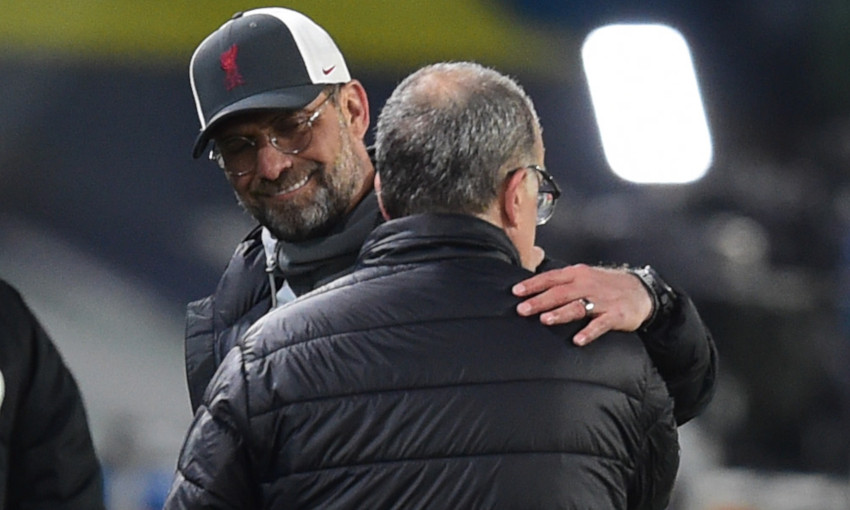 Liverpool will be preparing carefully in the coming days for the specific challenges of facing a Marcelo Bielsa tactical system, explained Jürgen Klopp.

The Reds resume Premier League business on Sunday with a trip to Leeds United, aiming to build on the seven points they collected in the three games before the international break.

With several players only returning to the AXA Training Centre in recent days from duty with their countries, Klopp is looking to maximise the time he now has with the full group to make specific tweaks for the clash with Bielsa’s Leeds.

“In general, Marcelo Bielsa’s style and philosophy and how they defend is different, it’s man-marking over the whole pitch. So you have to know about it,” he told Liverpoolfc.com.

“But we had with some players now a week’s time to prepare it and some only come back training today [Thursday] but have recovery and stuff like this. So maybe tomorrow [Friday] and hopefully Saturday we have two sessions where we can probably prepare it. But it’s special.

“Against Leeds, high intense, they go for it. They are good in possession, I think so far second or third in possession. Didn’t have the points yet they want to have but they for sure think they have a good chance against us. But they didn’t play us yet in this season.

Elland Road will be full for the 4.30pm BST kick-off, marking the first time Liverpool have experienced the stadium at capacity in a league match since February 2004.

But Klopp and his players do not have to look far for expert advice on what to expect in Yorkshire.

Reds vice-captain James Milner, who was back in team training during Thursday’s session, began his professional career with hometown club Leeds.

“I heard about it but cannot say a lot. We have to probably ask Millie exactly how it is,” said the boss. “Millie knows it from both perspectives; not sure, maybe not. Not sure if he played there with another Premier League team. Who knows? But he can tell us how it is and he will tell us.

“We are used to a very special atmosphere obviously when we play at home. In the Premier League there are obviously some grounds with a really good atmosphere – so, if Leeds is another one, good for them and we have to deal with it.”

Sunday’s encounter is the first of seven for Liverpool in 22 days, encompassing fixtures in the league, Champions League group phase and Carabao Cup.

Following a more staggered beginning to the season, then the pause for international football, Klopp is eager to enter the rhythm of three games per week again.

Asked about using the squad for the upcoming period, he said: “Absolutely, that’s how it is.

“And how you know, we are Liverpool and that means everybody expects us to win each game. It’s not about, ‘Here we can a little bit…’ We will use each source, each leg we have and we’ll try to be as successful as possible.

“I’m actually looking forward to it. It’s now really long enough – we had a long summer, we had a long pre-season, now we had these three games with always a week between. Now, come on, we are used to the rhythm of playing every three days.

“We wanted [and] we were so happy to qualify for the Champions League – now it starts, so all good.”