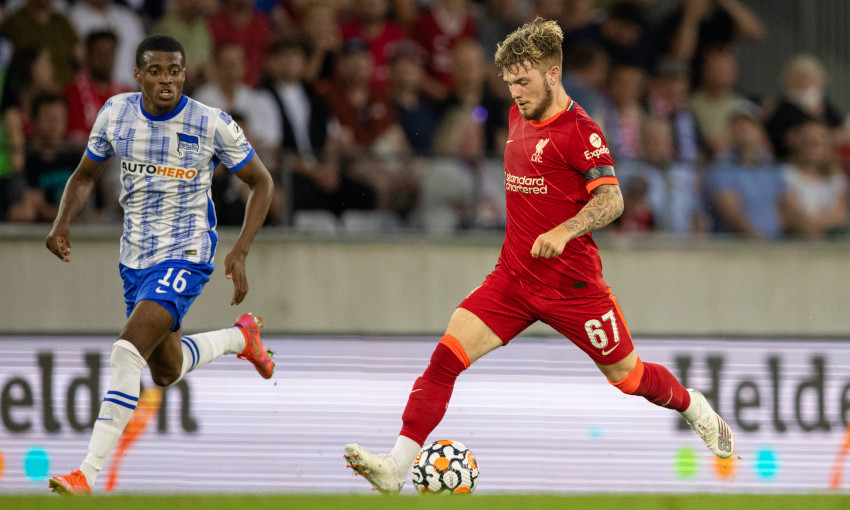 Harvey Elliott is brimming with confidence and enthusiasm wherever he is deployed on the pitch by Jürgen Klopp this pre-season.

The 18-year-old has been used in a variety of attacking positions since he joined the club in 2019, including in a slightly deeper central role in games so far this summer.

For Elliott, the exact nature of his involvement matters little – gaining and maximising opportunities of any description is the sole focus for the No.67.

“To be honest, I don’t mind playing anywhere,” he told Liverpoolfc.com after featuring in the opening 45 minutes of Thursday’s 4-3 friendly defeat by Hertha BSC in Austria.

“Wherever I play, I’m just excited to put the shirt on every single game, give it my 100 per cent, work as hard as I can and just try to influence the game.

“Wherever the gaffer tells me to play, I’m more than confident and willing to play there. It’s just all about putting on the shirt again and giving it 100 per cent.”

Sadio Mane and Takumi Minamino brought the Reds back on terms by the interval after Klopp’s side had fallen two goals behind at Tivoli Stadion.

Asked if the benefit of additional minutes in the players’ legs supersedes the result, Elliott said: “Yeah, definitely, that’s what pre-season is about; making these mistakes here.

“We’re all going to reflect and learn on them and then when the season comes I’m sure we’ll cut them out. But it’s pre-season, a defeat is a defeat – everyone is obviously not in the best of moods, but we’re going to reflect on it and go again next game.

“We go into every single game thinking we can beat any team, whether it’s pre-season or in a league game. Whatever the competition is, we go in giving it 100 per cent, feeling like we can give it our all and get the win.

“Obviously it didn’t go our way today but we can reflect on it [and] next game put it right. We’re not making any excuses, because at the end of the day our performance wasn’t good enough. But we’ll go again next game.”

That next game is actually two games.

Liverpool’s pre-season training camp moves from Austria to Evian this weekend, where back-to-back 60-minute contests against Serie A side Bologna have been arranged for next Thursday.

The Reds will subsequently return home and host Athletic Club and CA Osasuna at Anfield ahead of the Premier League kick-off at Norwich City on August 14.

“We’re all buzzing for the start of the season,” said Elliott.

“We’re all excited – let’s just see what it brings.”