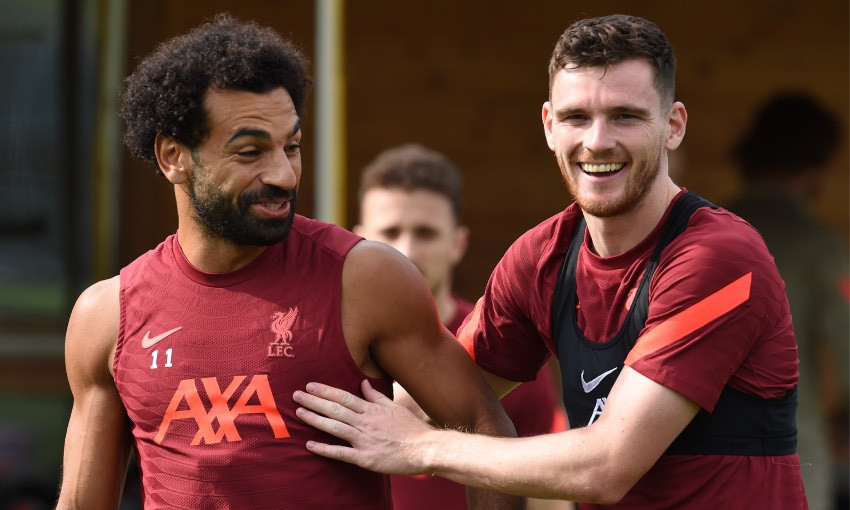 Andy Robertson feels recharged and ready to attack the 2021-22 season with his usual gusto.

The defender reported to Liverpool’s training camp in Austria last week after an extended break, having captained Scotland at Euro 2020.

Quickly settling into pre-season, Robertson is likely to play some part in Thursday's friendly with Hertha BSC, according to Jürgen Klopp.

The left-back caught up with Liverpoolfc.com at the team's hotel in Tirol for a wide-ranging chat about his summer, the campaign ahead and plenty more. Read on for the transcript...

Now you're back focusing on club matters, do you feel refreshed now?

Obviously a lot got put into the last season, obviously me playing a lot of games. Physically I felt it but emotionally as well, it was an up-and-down season. I was emotionally drained, I think, after the Euros, obviously I put everything into it and then for the way it ended, the next week I was pretty tired and just tried to relax. Luckily the manager gave me a bit of extra time off, which was appreciated. I got to spend some quality family time but more importantly let my body recover that wee bit more. I feel good, I feel fresh, I feel ready to go and ready for hopefully another big season ahead.

It's already been a bit of a baptism of fire since you've arrived – you look like you're flying already. Do you feel it today?

No, not really, not today. The gaffer has been really good with the international boys in terms of us coming in a wee bit later and obviously some lads are still to show up. But the downside of it is that the boys have been in 10, 12 days and are really getting up to speed and you're still trying to find your feet. I feel good, I feel good physically, and obviously the match sharpness will need to come back in terms of on the ball and everything like that. But the only way by doing that is training, the only way by doing that is getting through the tired legs and hopefully getting some minutes on the pitch as well. When you do that, you get closer and closer, and then the season's only around the corner and we'll all be good to go come the Norwich game.

Pep Lijnders spoke this week about the new ideas you're taking on. There's been some 2v1, 2v3s in training which you were involved in during training on Monday. Is there a feeling that maybe you need to score more goals from those situations?

Of course. Even in the season before when we were champions and the season before that when we were champions of Europe, we continually wanted to improve. Obviously last season didn't go the way we wanted it to for a number of reasons but one of the reasons was we maybe didn't take our chances at times when we were on top and we also got punished at the other end. It's about adapting, improving as a team. The good thing is we're an honest group of boys that are willing to improve, the coaches are willing to improve as well. When you have that, things can only get better. We look to work on these situations, we look to maybe punish teams a wee bit more when we have these situations come our way. Also on the other side, we need to keep more clean sheets than we did last season because we didn't keep enough. Look, a lot of people can point to not having the rhythm of a normal back four and having it consistent. But the lads that went in did a good job and luckily we kept the clean sheets when we needed to near the back end of the season and finished third – which was a positive with 10 games to go but it wasn't a positive at the start of the season, that's what we need to remember. Our objectives this season will be very different.

How much of a boost does it give you when you come and see everybody fit again? The sessions are so loud because the leaders are back out there again...

Long may that continue. You don't want to see anyone injured. Last season we had injuries but they were bad ones. Sometimes you go through seasons where maybe people pick up two- or three-week [injuries] and you don't see that they're missing. But the ones we picked up last season were lengthy ones. We've still not got probably the loudest in training back – Hendo will be coming back and I'm sure he'll be fired up, obviously we've missed him since February. In terms of Virg, Joe, Joel, it's great to see these boys back out on the pitch. We've been through their whole rehab together – the good times and the bad – and you can see how positive they're looking. Of course, they're still trying to build that fitness, still trying to build the match sharpness back up again and it's getting better and better every day and they'll get some minutes in the near future. That will only help them, of course, and it will help us as well, having leaders back on the pitch, having loud voices, having quality players more importantly. It just adds to a squad because obviously the three centre-backs have come back but Nat and Rhys last season near the back end did amazingly and it's good to then add options. Obviously we've got big Ibou as well to throw into the mix, who's looking already at home. Long may that continue, long may we have all these options all over the pitch because there's nothing worse than injuries and hopefully we can all have an injury-free season.

There are players coming of age, too – we've got Curtis Jones, Harvey Elliott is back in the mix now...

It's important to not put too much pressure on these lads, it's important to let them still develop, still play their games, still not try to influence them too much because the spark that they can bring to the game is very unique and it's about allowing them to do that, it's about giving them the freedom to do it. Millie and the rest of us all try to help them, help all the young lads. Even some of the newer ones that have come up, we try to help them in every way possible because we know they're the future, we know they're the ones that are going to make us even better. Harvey was outstanding last season on loan [at] Blackburn, took the Championship very well and now it's about the next step, it's about the next step of now competing here and trying to get minutes here. Curt is coming of age. I thought last season at times he was outstanding but it's now about the consistency, it's always about that and doing that on a week-to-week basis. Curt is a great kid, I've got a lot of time for him, I try to take him under my wing – probably more so than anyone. He always bounces things off me and I hope this is a big season for him because, like I said, he's a fantastic player and he's a fantastic person. I just hope that he can find that consistency, keep that hunger that he's got and he'll only get better. I think people forget how young he still is, Harvey as well and all the other young lads. You still need to let them improve but I think hopefully there's a big season ahead for all of them.