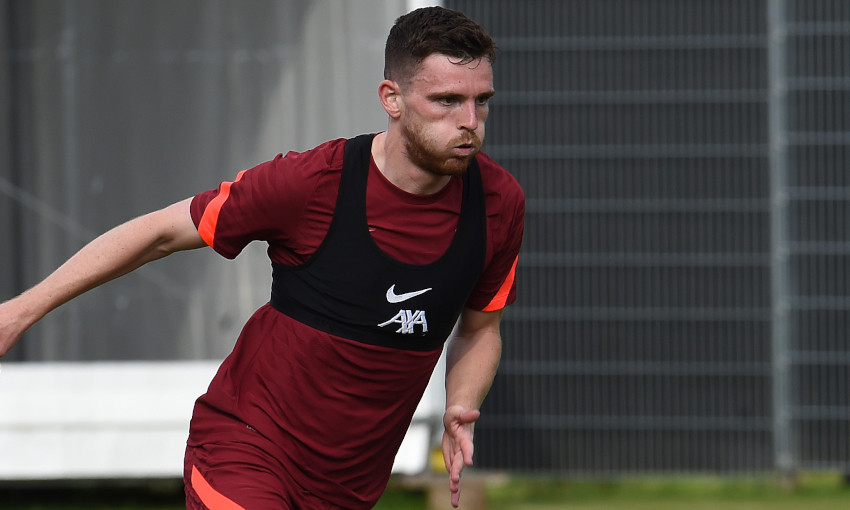 Andy Robertson and Diogo Jota are in line to make their first appearances of pre-season against Hertha BSC on Thursday.

The duo reported to Liverpool’s Austrian training camp at the end of last week and have been taking part in the daily sessions with their teammates.

And after confirming Virgil van Dijk could play some part in the Reds’ next outing, Jürgen Klopp revealed Robertson and Jota are also likely to be involved in Innsbruck.

The boss told Liverpoolfc.com: “They will have minutes, that’s the plan. They obviously trained completely normal all the time now and we try to involve them.”

Liverpool fielded a team in each half against FSV Mainz 05 in their last friendly; however, Klopp confirmed some players are likely to get extended minutes on Thursday.

“For some of them it’s the plan,” he continued. “Some of them are ready for 60 minutes, it will be hard for them definitely but it means then others play 30 minutes and stuff like this, or even maybe 20 minutes and these kind of things.

“We try. Pre-season is about trying, it’s a proper, proper challenge to make all these individuals to bring them in the best possible physical shape and make us more ready or stronger as a team. Unfortunately, football is not like cycling, so you don’t miss it completely but the pedals and stuff like this just go away so quick that’s incredible. So we have to work on that again, that’s what we do.

“Today is a really tough [double session]. I like it, the players probably sleep now already and that would be better because this afternoon it would be really hard.”