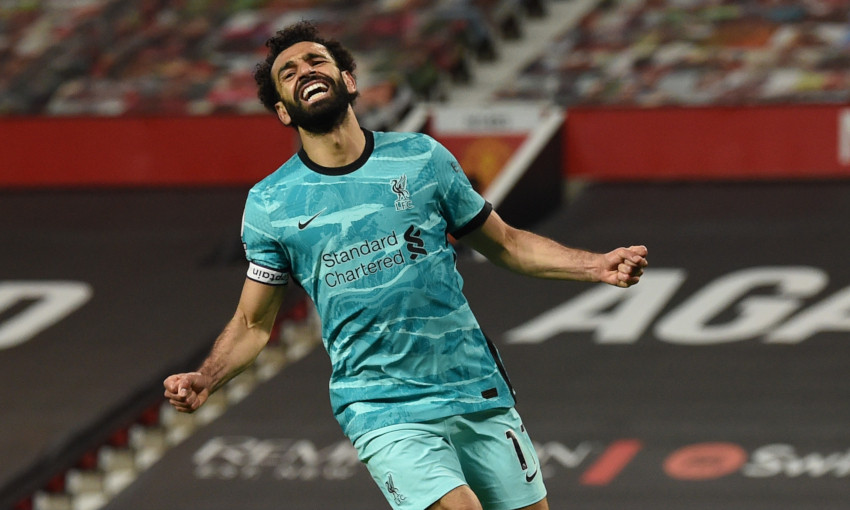 Liverpool toasted a first win at Old Trafford for seven years and improved their top-four ambitions with a 4-2 defeat of Manchester United on Thursday night.

An incident-filled Premier League showdown saw the Reds recover from an early deficit to overpower their rivals with goals from Diogo Jota, Roberto Firmino (two) and Mohamed Salah.

Here are seven talking points from a memorable victory for Jürgen Klopp’s men...

A dramatic night, a huge win

Liverpool’s meetings with United haven’t always lived up to their billing in recent years, perhaps – but this edition was a definite classic.

Eventful from the off, the Reds’ task – a must-win match, crucial to Champions League qualification, at the home of their fierce rivals – grew when Bruno Fernandes benefited from a Nathaniel Phillips deflection on 10 minutes.

Phillips then looked set to be awarded a penalty for a strong challenge by Eric Bailly in the area but the referee overturned his initial assessment after reviewing replays.

The away team shrugged off those setbacks, however, to surge past the hosts for much of the remainder, racking up a 3-1 lead either side of half-time and refusing to buckle when Marcus Rashford threatened a comeback midway through the second period.

Salah’s breakaway finish in the 90th minute ended the lingering tension and put a satisfying seal on a Liverpool performance that fully merited three precious points.

Putting the pressure on

The midweek Premier League results have provided another twist in the intriguing, spooling plot that is the race for a top-four finish.

Chelsea’s 1-0 defeat at home to Arsenal on Wednesday night offered further hope to Liverpool before kick-off and they took full advantage of the opportunity with their triumph over United.

Klopp’s men are now fifth in the table, four points behind Chelsea and six short of Leicester City, with a game in hand over both teams, who face each other next in the league on Tuesday.

The Reds will now aim to strengthen their chances once more when they journey to West Bromwich Albion on Sunday afternoon.

Restored to the starting line-up, Firmino picked the perfect moment to return to the scoresheet too.

The Brazil international had last netted for Liverpool in late January but rediscovered predatory instincts to swing the encounter in his side’s favour before and after the interval.

First, he showed strength to hold off his marker and meet Trent Alexander-Arnold’s deep free-kick with an accurate header into the roof of the net. 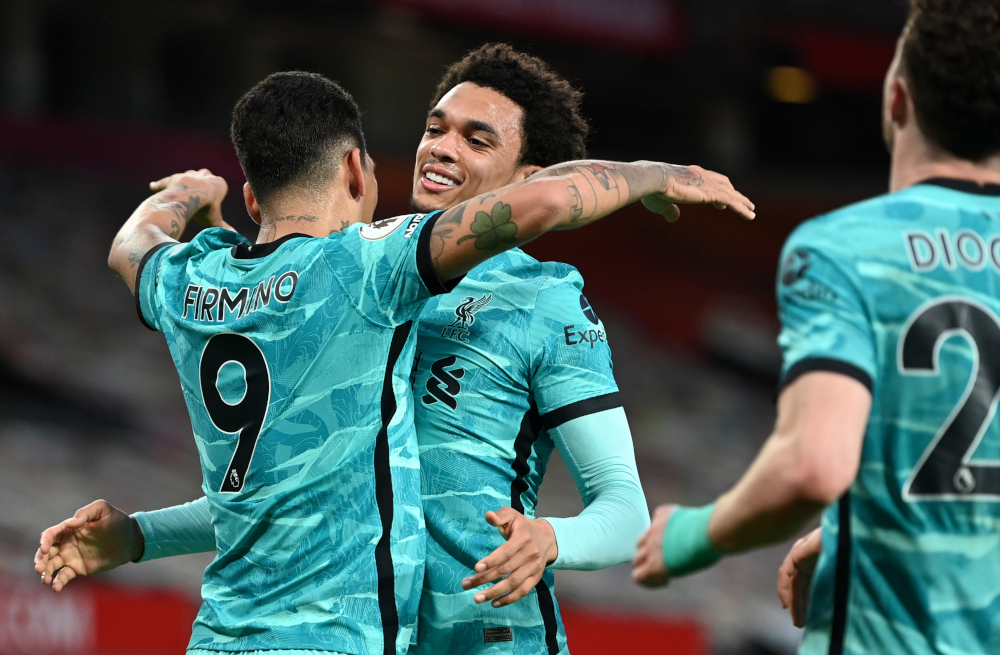 Then Firmino was the quickest to react when, two minutes into the second half, Alexander-Arnold’s effort was beaten out by Dean Henderson, the No.9 pouncing to scoop a finish home.

Two goals worth the wait?

Trent stands out at Old Trafford

The Scouser in the team delivered a Man of the Match masterclass.

Alexander-Arnold’s pinpoint set-piece delivery from the right flank in first-half stoppage time invited Firmino to head in Liverpool’s second, and it was the No.66 whose shot was rebounded to the same man to convert a third.

He recorded five key passes overall on the night, as well as topping his team’s tallies for touches (86), shots (four), crosses (five), passes in the opposition half (32), interceptions (two) and possession gains (14). 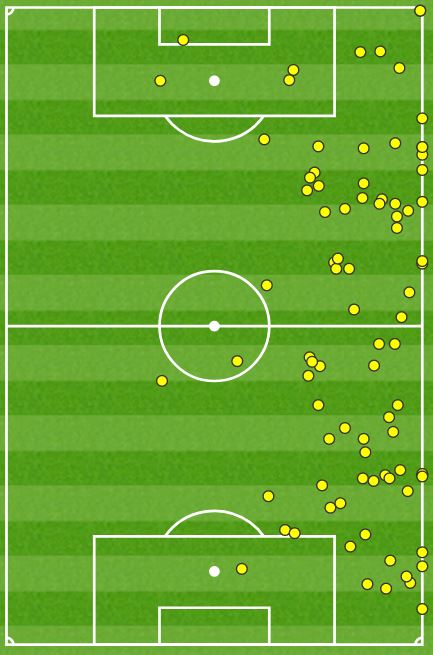 Thursday’s contest brought up Liverpool appearance number 200 for Salah, who has featured in all but seven league games since joining the Reds in 2017.

The Egyptian marked his milestone outing with the clinching, last-minute goal, one that had shades of his famous Anfield strike against United last January as he ran clear on the counter-attack and slotted a finish past the goalkeeper.

The effort provided Salah with another personal milestone on the night – his 30th strike of the season in all competitions.

In total, the No.11 has now netted 124 times for the Reds – the 12th-highest tally in club history – and only two men have ever hit more in their opening 200 LFC matches (Roger Hunt and Gordon Hodgson).

Phillips was something of a magnet for key moments at Old Trafford.

The centre-back suffered the misfortune of diverting Fernandes’ opener past Alisson Becker from close range and then was denied a penalty as he went down under a challenge from Bailly.

It was Phillips’ determination that forced Jota’s equaliser soon after, the No.47 shielding the ball in the opposition box before his drive on the turn was flicked into the net by his teammate.

Later, with the score 3-2, he was perfectly placed to clear Mason Greenwood’s goalbound attempt off the line – a heroic intervention immediately equalled by defensive partner Rhys Williams to thwart the same player. 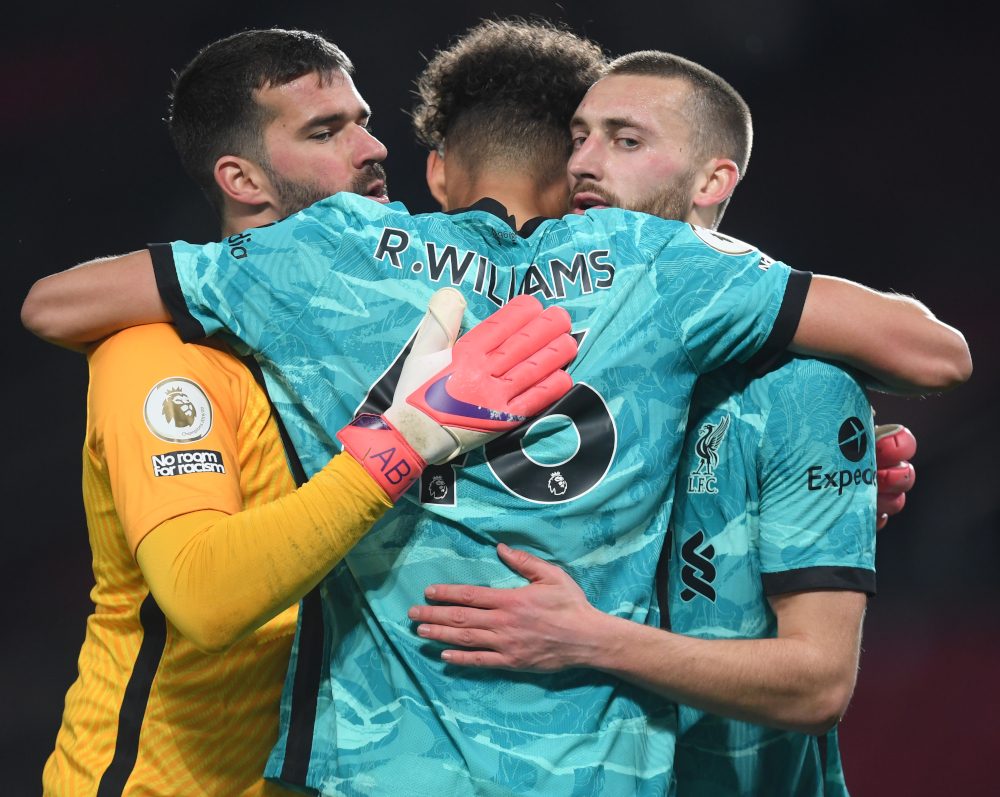 “It was a rollercoaster,” he said. “It was a strange game and it took a lot from us, a lot of hard work. It was an ugly match but we had to make it that way again to make sure that we got the result.

“It’s another step in the right direction. We’ve got another three games to go but it was a big night for us.”

Klopp has, of course, achieved so much during his time at Anfield but one item missing from his Liverpool CV until Thursday night was a victory at Old Trafford.

Six previous visits to United in his reign had included four draws and two defeats at a ground where no Reds side had won since 2014.

But Klopp can now happily scrub that entry off his to-do list having seen his charges become only the second LFC team to net four times in this fixture in the past 85 years.

“I liked the timing, to be honest I would say we needed it tonight the most pretty much, so we did it. But I know it is very tricky, that’s why it took so long until we did it,” said the manager.