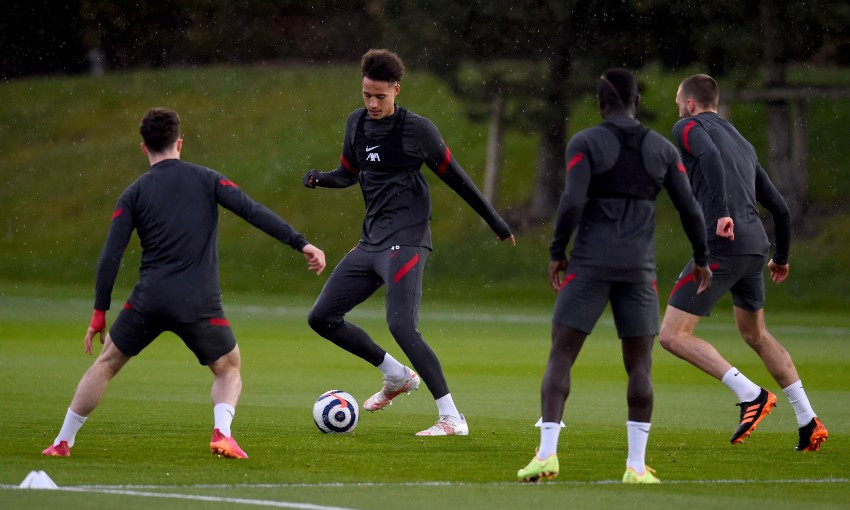 The quartet missed the victory over Southampton last Saturday due to minor fitness concerns and appear to have failed to recover in time for the Old Trafford encounter.

With Kabak and Davies sidelined, Rhys Williams partnered Nathaniel Phillips at the heart of the defence for the 2-0 win against Saints at Anfield.

Working hard in the rain at the @AXA Training Centre 👊🔴 https://t.co/EaiASe0g0w

After confirming the weekend's absentees are not expected to be available again, Jürgen Klopp was then asked if he would be confident in fielding the same centre-half pairing and replied: "Yes.

"We train from time to time and you cannot just put a boy on the pitch if he's not in the shape for that in that moment – you have to find another solution.

"You don't line a player up, especially not a young one, and hope it will work out. But in the moment when boys show up in training, when they have a momentum in training, these kind of things, then is a good moment for that.

"Rhys, for example, is now in a really good moment and that helps obviously. Who we will line up, we will see."

The boss also confirmed during his pre-match press conference on Wednesday that Jordan Henderson is likely to miss the remainder of Liverpool's season with his groin injury.

However, the Reds captain is not yet ruled out of participating for England in this summer's European Championships.

Klopp said: "I think there's a chance, for sure – unfortunately not for us, but for England then."

United, meanwhile, will be without their skipper Harry Maguire after he injured his ankle in a recent contest at Aston Villa.

"I don't think he'll play in the league again before [the end of the season]," Ole Gunnar Solskjaer told reporters. "We'll do everything we can to get him ready for the [Europa League] final."

Daniel James and Anthony Martial are unlikely to feature in the 8.15pm BST kick-off, while Phil Jones is ruled out.

United made 10 changes for Tuesday's 2-1 defeat by Leicester City in the Premier League and Solskjaer suggested further alterations are likely due to the quick turnaround.

He said: "There will be changes, of course, but many of the players that played did really well, so they're in contention as well."