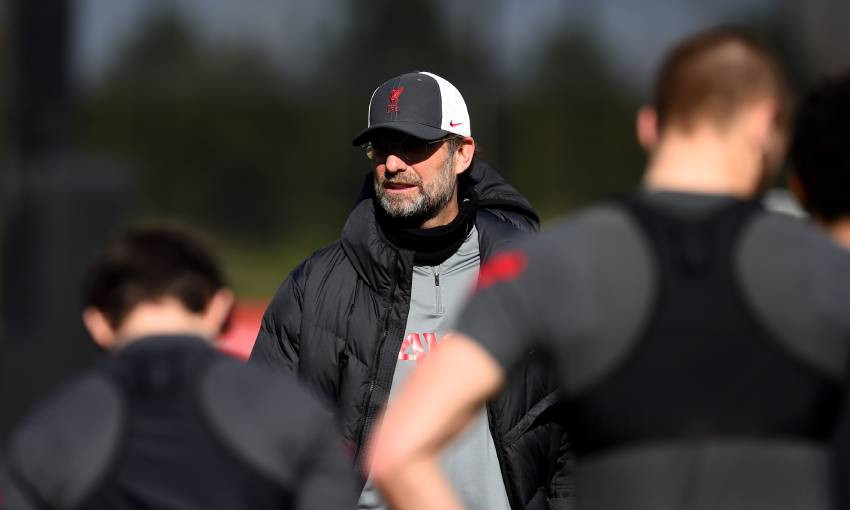 Jürgen Klopp has urged his Liverpool players to 'go with all we have for everything' as they enter the last phase of the season.

The Reds return from the international break with a trip to Arsenal on Saturday evening before then kicking off their Champions League quarter-final tie with Real Madrid.

Currently five points adrift of fourth-placed Chelsea in the Premier League standings, Klopp admits the margin for error for his side is very little heading down the final stretch.

"Unfortunately, we are not living in dreamland," he told reporters on Friday. "But if you would ask me what do you wish for, for this last period, I would say: 'Come on, just let's go with all we have for everything that is out there and then let's have a look what we got for it.' That's how I see it.

"Obviously I didn't have a game for around nearly three weeks but most of my players had three games. We have one session together, that's today. But anyway, that's the way we want to see it – what we can do with it.

"We don't have, obviously, a lot of points to waste anymore. But we have a tough programme on top of that, not only in the Premier League but in the Champions League as well. These kinds of things.

"We will not hesitate, we just will go for it and hopefully we can do that on Saturday already.

"It's always a challenge for all the teams, coming back from an international break, because the players were all over the world. They played for their countries, different systems, different philosophies, different match plans and all these kinds of things.

"You have one session to bring it all together again and that's a challenge. We are used to it but it's not guaranteed it always works. We hope it works this time and then let's go for it.

"But whoever plays away at Arsenal should not expect having the points before the game already. We don't do that.

"We know whatever we want for the rest of the season we only can get it if we win football games. And the first one of these football games is tomorrow night against Arsenal."

Liverpool and Arsenal have already met three times so far in the 2020-21 campaign, with Klopp's men winning the Anfield league fixture 3-1 back in September.

The Gunners find themselves ninth in the table with nine fixtures remaining, though Klopp stressed how big of a challenge the 8pm BST contest will be.

Asked whether he is surprised by Arsenal's position in recent seasons and if the test of facing them is 'huge', the boss replied: "It is indeed.

"Surprised? I don't think like this about other teams so I don't judge them and think they should end up here or end up there. No, how I said, not surprised because I didn't think really about it.

"But Arsenal is a quality side – if you go through the team they have a lot of potential, a lot of quality already as well, have experience, have the youth, have a really exciting team, to be honest. That's how it is.

"But the Premier League is a tough league. If you are not in each second on your absolutely top level then you get punished. We obviously realised that as well, not only this year but this year as well.

"It's a tough one but should be a tough one for Arsenal as well – that's actually my only intention, to make sure that we will be exactly the opponent Arsenal don't want to face this weekend.

"For that we have to put a proper fight out there and have to defend on our absolutely top, top level. If we do that we have a chance. If not, not."