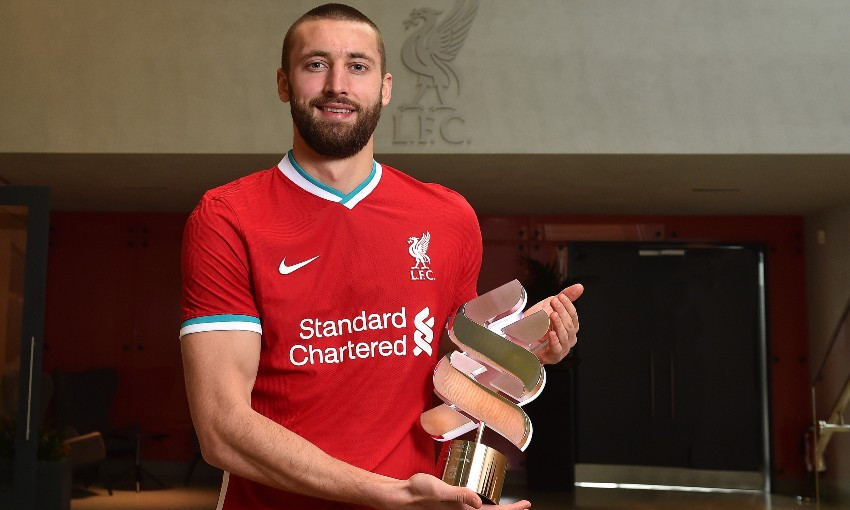 The defender claims the prize for the very first time after beating Mohamed Salah and centre-half partner Ozan Kabak in our latest fan poll.

Phillips' standout display from his three starts in the month was a Man of the Match showing on his Champions League debut against RB Leipzig in Budapest to secure the Reds' place in the last eight of the competition.

The 24-year-old then followed that up with another clean sheet away at Wolverhampton Wanderers in the Premier League as he and Kabak continue to strengthen their partnership in the backline.

After being presented with the accolade at the AXA Training Centre, Phillips told Liverpoolfc.com: "Obviously I'm delighted.

“It was a nice surprise for myself and it's obviously a huge compliment that the people who voted thought that I'd deserved it.

“It's really nice to feel that sort of love and I'm hugely appreciative of it. But at the same time, I try not to pay too much attention to it and just concentrate on the job at hand that I've got for myself, and carry on doing what I was [doing] to get myself into this position.”

The No.47, who spent the majority of last season on loan with VfB Stuttgart, has received widespread praise resulting from his 11 appearances for Jürgen Klopp's side so far in 2020-21.

Asked if he could ever have imagined all this happening, he replied: “It didn't cross my mind for a second and obviously I'm really happy that things have gone the way that they have done.

“But if someone would have told me at the start of the year that this would be happening, I wouldn't have believed them.

“We've been going through a bit of a difficult period after Christmas, so it's taken a lot from all of us to group together.

“There's been quite a few games where we've got results where we've had to group together and dig in as a team and just get the job done – for example, the Wolves game, the Sheffield United game as well.

“I couldn't have won this award without them [his teammates] and it's been nice to have seen that from all the boys.