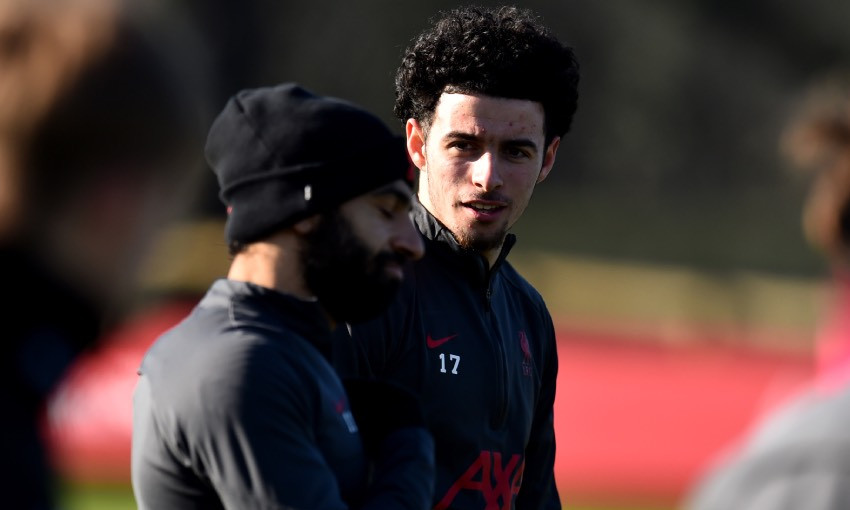 Curtis Jones is no longer a teenager and now wants to take on greater responsibility for Liverpool.

The Academy graduate turned 20 at the end of January and, to date, has made 38 first-team appearances for his boyhood club.

It's been more than two years since he made his senior debut away at Wolverhampton Wanderers in the FA Cup. So, how settled does the Scouser feel in and around Jürgen Klopp's squad?

"I've always been settled!" Jones said during a conversation with Liverpoolfc.com from the AXA Training Centre. "Two years ago, I don't think I would ever have thought that I would have played this amount of games. It's been a positive period for me on a personal note.

"But I'm happy I'm doing well. I'm a player who wants to be counted on and hopefully I can help the boys out going forward.

"I've always said that I'm a confident lad who likes to get the ball and try to make things happen. That's what I was trying to do [against Manchester City].

"It was a hard game, it was a great test for me and a great experience – and I think I did OK."

As Jones looks to establish himself even more in the starting XI, he is aware of the pressure attached and trust afforded.

Liverpool's last outing was the 4-1 defeat by City at Anfield, where uncharacteristic misplaced passes from Alisson Becker led to two of the goals.

Errors at this level can prove costly – as Jones can attest himself.

"It happens to the best of us," he said. "It was exactly the same with me against West Brom.

"I tried to dribble in an area that I shouldn't have and I gave the ball away, corner and goal. You can look at that as I've cost the team there as well, and now unfortunately it was Ali's turn against City.

"But he's a huge player for us, a huge person for us and he's kept us [in games] a lot as well.

"I think everybody got around him well. He knew himself as well at the same time but it was just good to see the way the lads were with him."

The Reds' next three fixtures are high-profile, exciting encounters Jones wants to be involved in.

A trip to Leicester City on Saturday lunchtime is followed up by a clash with RB Leipzig in the Champions League and then Everton at home.

He said: "It's going to be a hard run against three great teams who are doing well, who'll be very good but in different ways – and we know that as a team and as a bunch of lads.

"I think if we get a win against Leicester, it'll set us up perfect then for the Champions League and then obviously if we get a win there, I think everybody knows how big of a game it is against Everton always, it'd put us into like a perfect position.

"But we just take each game as it comes and we'll just see what each game holds for us. But hopefully it's all positive and hopefully we can get wins out of each one."

The attack-minded midfielder played the entirety of the reverse fixture against Leicester earlier this season, with Liverpool clinching a 3-0 victory at Anfield.

Another set of three points this time would see the Reds leapfrog Brendan Rodgers' side into third spot in the Premier League standings.

Looking ahead to the trip to King Power Stadium, Jones commented: "I've always said every game we play in the Premier League is always a hard game – Leicester especially because of the certain players they have, and their style of play is hard to break down.

"But we played them at the beginning of the season and it was a great team performance and we came away with a great win.

"I think they'll be trying to put things right and give us a bit of a knockdown again. But the boys are 100 per cent ready and we can't wait."