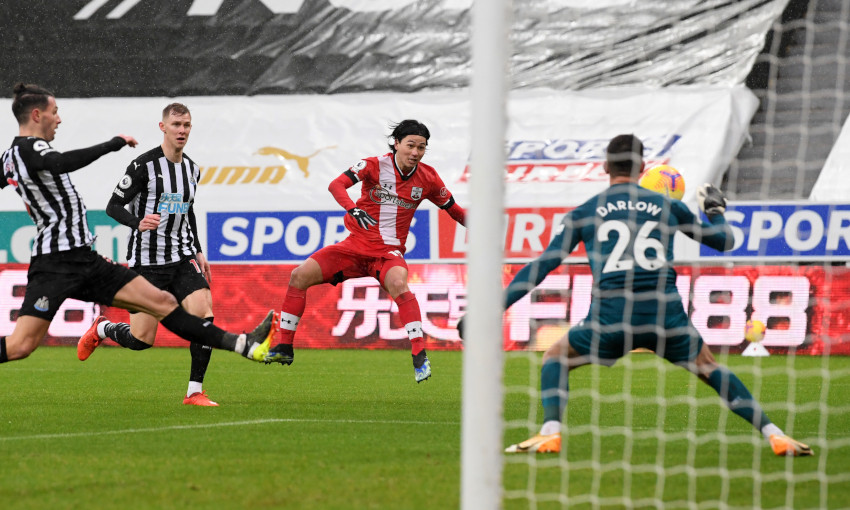 Takumi Minamino scored with an emphatic finish to mark his debut for Southampton on Saturday.

The Liverpool forward sealed a loan move to Saints last Monday and will spend the remainder of the 2020-21 season on the south coast.

Minamino made an immediate impact for Ralph Hasenhuttl’s side, finding the net with a clinical, rising drive against Newcastle United in a 3-2 Premier League defeat.

“Happy for him, definitely,” Southampton boss Hasenhuttl said of Minamino, who started and played the full match at St. James’ Park.

“I expected exactly what I saw – he is a good player in the red zone, has good movements there. It was tough in the second half because it was getting tighter and tighter, and the long balls into the box are not his game.

“But [being] in the red zone and speeding up the game is definitely his game, and that can help us.”

In the Championship, both Sheyi Ojo and Harry Wilson provided first-half assists to help Cardiff City clinch a 2-0 win over Bristol City.

Wilson’s free-kick delivery from the right teed up Curtis Nelson for the opener, before Ojo’s inviting cross from the same flank was converted by Kieffer Moore.

The on-loan Reds duo each started the contest at Ashton Gate. Wilson was withdrawn in the 72nd minute, Ojo in the 80th.

Elsewhere in the division, Harvey Elliott completed the game as Blackburn Rovers were beaten 1-0 at Queens Park Rangers and Sepp van den Berg debuted for Preston North End as a 72nd-minute substitute in their 2-1 defeat at home to Rotherham United.

At League One level, Liam Millar registered an assist too.

The forward continued his promising form for Charlton Athletic by helping to create the opening goal of their 2-0 victory on the road against Rochdale, his run off the wing preceding a pass into scorer Chuks Aneke.

Adam Lewis, meanwhile, was introduced in the last minute for Plymouth Argyle in a 2-2 draw at Portsmouth.

In the Bundesliga, Taiwo Awoniyi started and featured for 73 minutes of Union Berlin’s 1-0 Bundesliga loss at FSV Mainz 05. Loris Karius was an unused substitute.

On Sunday, Kamil Grabara registered a clean sheet to help AGF Aarhus maintain their pursuit of top spot in the Danish Superliga with a 1-0 win over Lyngby.

And Anderson Arroyo played the full game for Salamanca UDS in a 1-0 success away from home at Racing Ferrol.