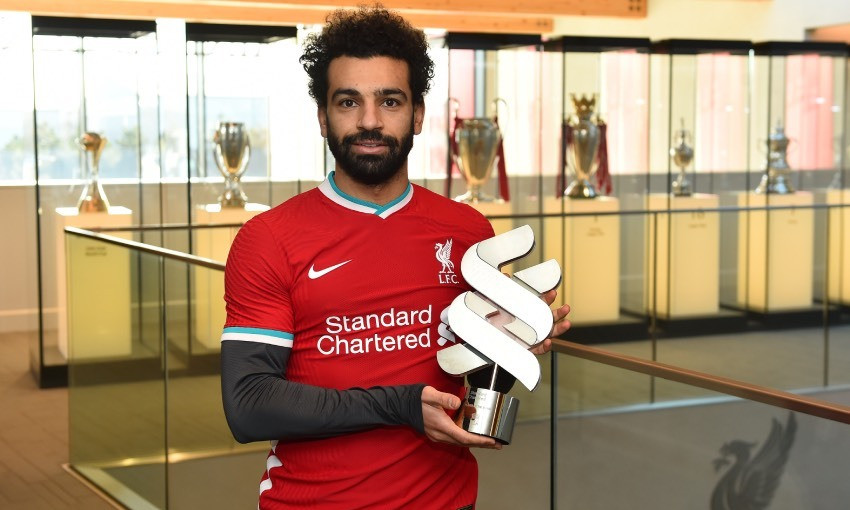 Mohamed Salah was today presented with Liverpool's Standard Chartered Player of the Month award for January.

The Egyptian keeps hold of the prize after another fine month of form, edging Jordan Henderson and Trent Alexander-Arnold in second and third respectively.

Salah appeared in all seven of the Reds' fixtures to open 2021 and netted five goals in the process.

The No.11 followed up his finish away at Aston Villa in the FA Cup with a clinical brace against Manchester United in the following round.

He brilliantly opened the scoring in the Reds' Premier League win at West Ham United and put the finishing touches on a stunning team move for his second of the afternoon.

After being presented with the award at the AXA Training Centre on Thursday, Salah told Liverpoolfc.com: "Thank you. Of course I'm happy to win this award but I'm always saying that every time the team comes first.

"It's good to win trophies individually but we just need to focus in that period and try to win games and go through the right way.

"I think last month was better than months before but we still need to win games. When I score goals and help the team to win games, that's what makes me happy.

"But if you score goals and the team is still not winning, that's not a great feeling. So we just need to carry on and I'm trying always to score goals to help the team.

"I think they [the fans] always support us, especially when they were in Anfield. But now with COVID they cannot come but I'm sure they're always supporting us.

"We just need to stick together and carry on, win games and stay with each other."