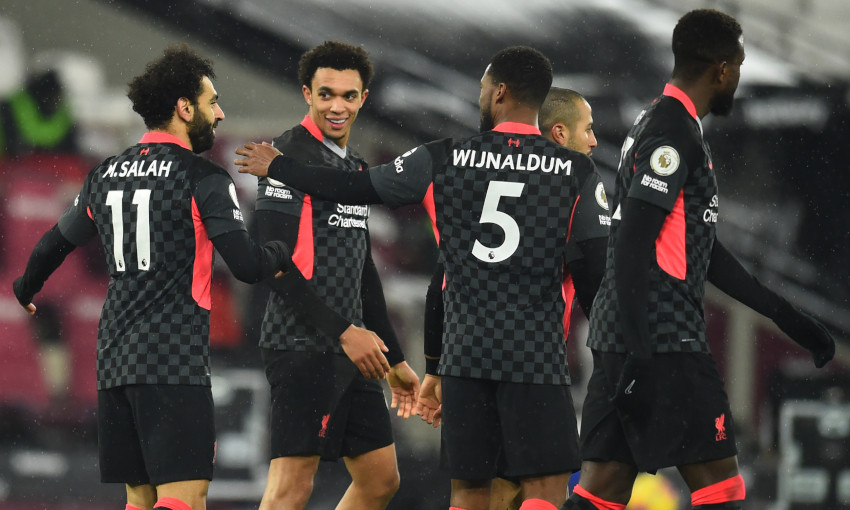 Liverpool made it back-to-back wins in the capital as a second-half flurry of goals defeated West Ham United 3-1 on Sunday.

Mohamed Salah opened up a lead for the Reds at London Stadium with two excellent finishes, and Georginio Wijnaldum put the game to bed for sure late on.

Craig Dawson netted a consolation for the Hammers but Jürgen Klopp’s side had already done enough to secure three points and rise a place in the Premier League table.

Here are six talking points from the contest…

Salah’s staggering goalscoring exploits for Liverpool were underlined by a seriously impressive new achievement on Sunday.

The Egypt international became only the fifth player in the club’s history — and the first since Ian Rush in the 1980s — to net 20 times or more for four consecutive seasons.

That he completed the accomplishment against West Ham came as little surprise; the No.11 has now struck nine times against them since he signed for the Reds, more than against any other opponent. 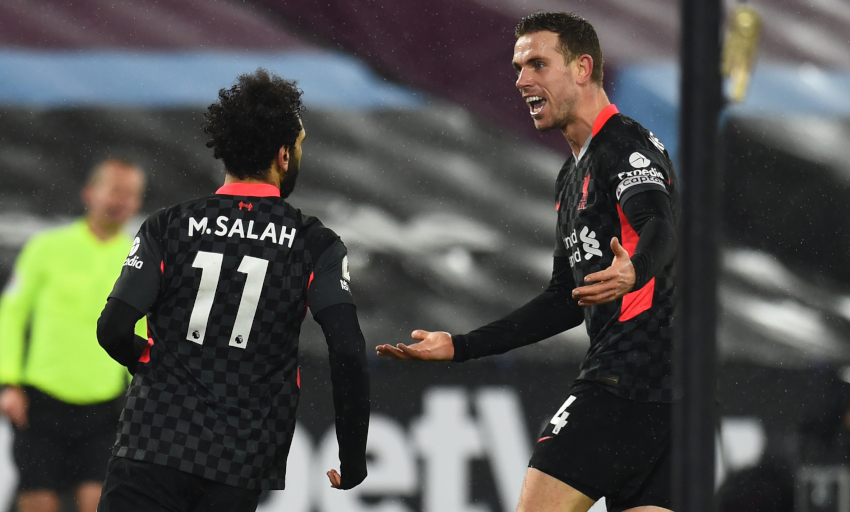 He is now four goals away from leapfrogging Ian St John in Liverpool’s list of all-time top scorers, and needs 16 more to enter the top 10.

Seven touches by Reds players transformed a West Ham corner into a Liverpool goal in the 68th minute.

Andy Robertson’s headed clearance came to Trent Alexander-Arnold on the right corner of his own penalty area and, having got the ball under his control, he pinged it into the gaping space high on the left flank.

Xherdan Shaqiri had ample time to weigh up his options as he ran towards the pass, and chose one of the most ambitious – a first-time, looped assist up and over the Hammers defence into Salah’s surge into the box. He nailed it.

Salah had plenty still to do, yet deftly turned chance into goal with an exquisite first touch on his right foot that steadied the ball perfectly in front of him to be nudged across Lukasz Fabianski into the net.

A debate to enjoy on another day, but it immediately goes high into the list of Liverpool’s best ever counter-attacks.

Klopp’s men came into their double trip to the capital on a streak of five Premier League games without a win, and away fixtures against two of the division’s top six offered no guarantee of a change in fortune.

But the Reds’ mentality and quality shone through in north and then east London to significantly change, and improve, the complexion of their top-flight campaign again.

Now back up to third in the table, they trail Manchester United by a single point and leaders Manchester City, who possess a game in hand, by four.

Successive home matches this week – against Brighton & Hove Albion on Wednesday and City on Sunday – now offer an opportunity for the champions to build on the foundations they laid in London.

“Please be cheeky, be cheeky and try something, be active and these kind of things.”

The manager’s final words to Curtis Jones on the touchline before he sent the Academy graduate onto the pitch shortly before the hour mark with the score still goalless.

Thirty-four seconds later, following a driving run through the middle of the park and then a pass into Salah inside the box, Jones had assisted the breakthrough goal. 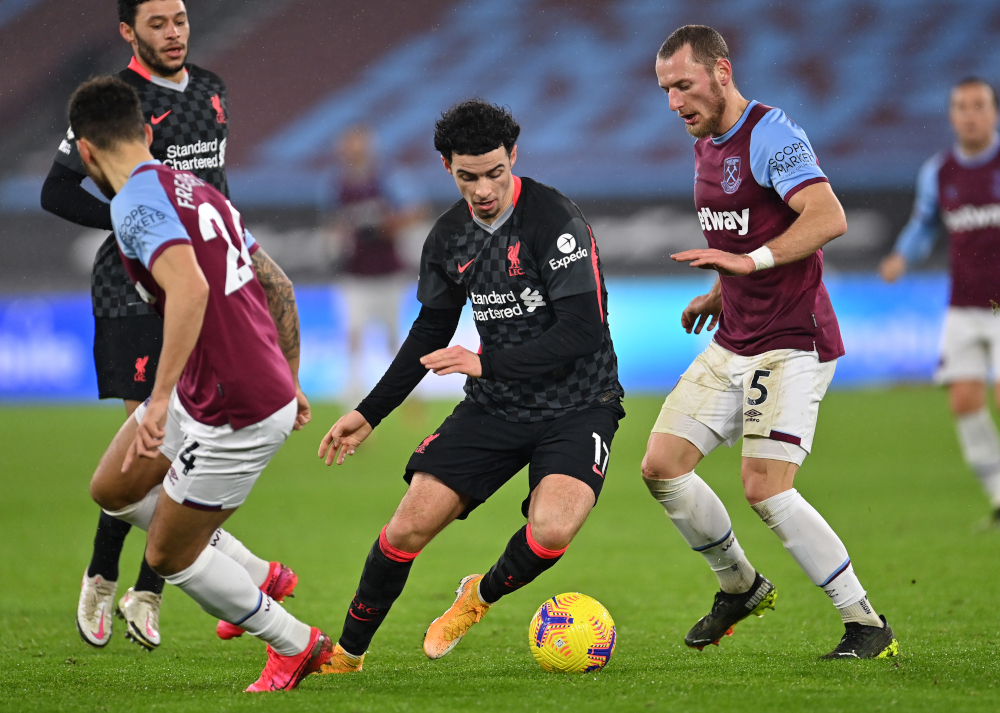 It was the start of an influential cameo by the midfielder, who went on to finish the encounter with passing accuracy totals of 97.1 per cent overall and 94.1 per cent in the opposition half.

Klopp’s two subsequent introductions from the bench, Roberto Firmino and Alex Oxlade-Chamberlain, later combined with a crisp exchange in West Ham territory to create Wijnaldum’s third for the Reds.

Jordan Henderson once again led by example from centre-back on the day he moved further up the club’s Premier League appearances list.

The No.14’s 286th top-flight match since he joined the Reds back in 2011 saw him overtake goalkeeper Pepe Reina into fourth spot.

Now only Jamie Carragher, Steven Gerrard and Sami Hyypia rank above the skipper, who is on course to leapfrog the latter next season.

From the heart of the backline, Henderson clocked up 98 touches and 92 passes, won 100 per cent of his duels, and registered 10 possession gains against the Hammers.

A technical fault in the closing moments of Klopp’s post-match press conference meant his tribute to the performance of Nathaniel Phillips could not be heard.

In fairness, the 23-year-old’s actions had done sufficient talking as he stepped in for his fourth Premier League start of the season in central defence in the absence of both Fabinho and Joel Matip.

Confident, strong and alert, Phillips was key to keeping David Moyes’ side at arm’s length for the majority of the clash, with Dawson’s late consolation the only blot on the defence’s copybook. 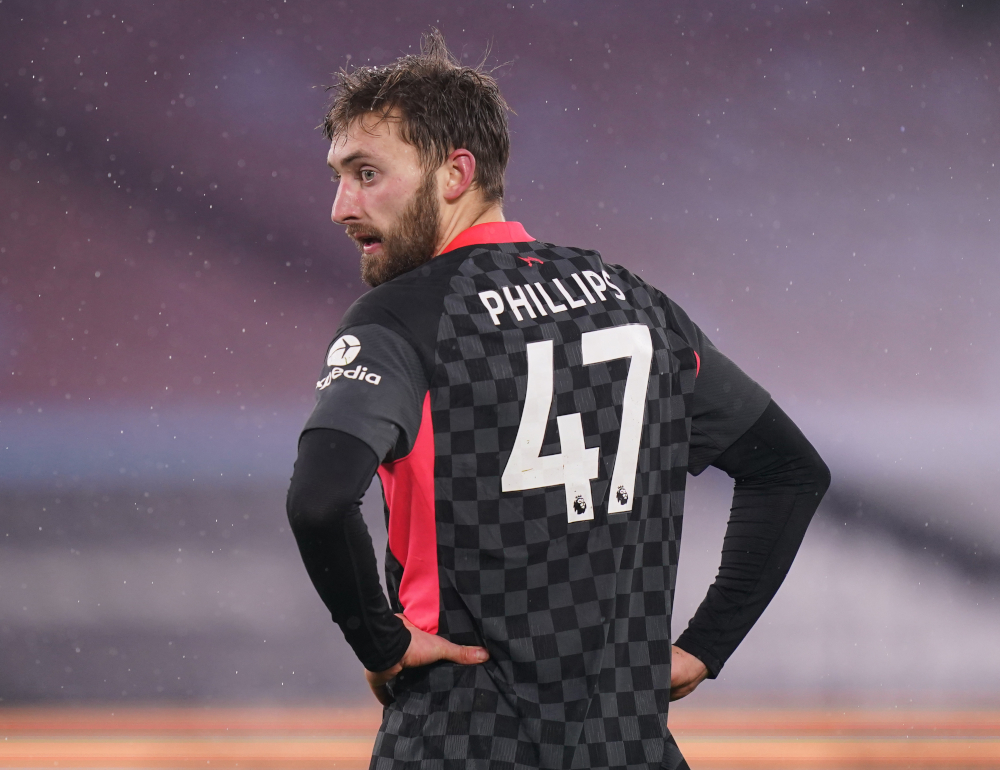 And when we did manage to dig out Klopp’s lost answer, it was worth the wait.

“Yes, I know [he] played now a few games. I think [Michail] Antonio tried to be on his side more for the counter-attack and these kind of things, but he defended it incredibly well – together with Hendo, I have to say, but the full-backs as well.

“We were really compact in the last line and that was absolutely helpful. He played a top game.”