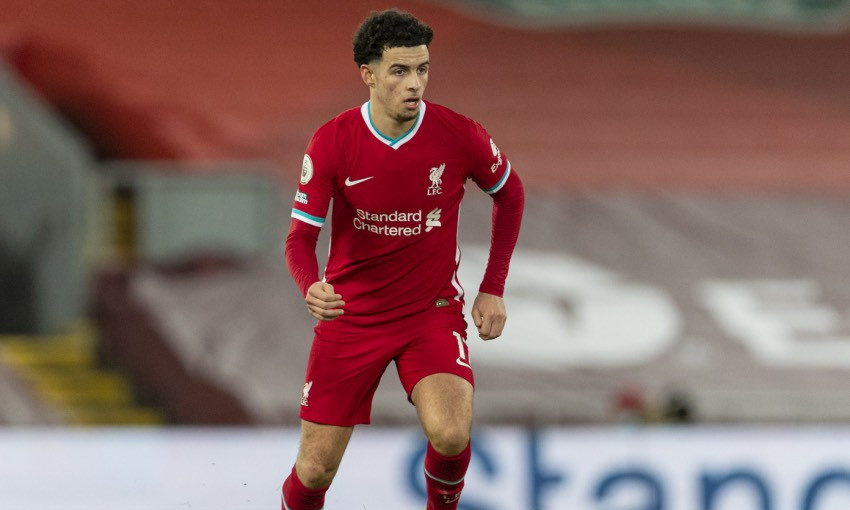 Curtis Jones has vowed to give everything he's got to try to help Liverpool turn the tide after a difficult run of form.

Jones and his teammates head to Tottenham Hotspur this evening, hoping to end a five-game sequence without a win in the Premier League.

Considering it a time to stand up and be counted, the No.17 set out his intentions if given the opportunity to feature in north London.

He told Liverpoolfc.com: "Everybody knows me that I'm a confident lad, I like to have the ball, I like to try to make things happen.

"As everyone is saying, it's a difficult period at the minute so any time that I'm called upon I'll always try to take my chance. I'll just see how things go.

"But as I said, as soon as I'm called upon I'll go in there and put in a shift and hopefully I can help with some goals or assists."

Speaking in the aftermath of last weekend's defeat by Manchester United in the FA Cup, James Milner felt there was obvious improvement from the Reds in the final third at Old Trafford.

It's an assessment shared by Jones, who played the entirety of the 3-2 loss in an advanced role.

"We got off to a good start in the last game, we scored two great goals, great team goals," the Scouser commented.

"I don't think we've been doing as well because of the goals that we haven't been scoring but we've been creating a lot. So hopefully we can put things right in the games that are coming up.

"Every team is a great team, you've got to give 100 per cent. Spurs have a particular style of play, they like to sit deep, win the ball and then go on the counter-attack. We have to be aware of that.

"We've been having a lack of goals, so hopefully we can go there and put a few past them."

Liverpool and Spurs met at Anfield prior to Christmas, with Roberto Firmino's 90th-minute header earning the hosts a 2-1 victory.

Looking ahead to this latest encounter, Jones concluded: "We know that it's a difficult game, a tough side to play against, especially at their ground it will be hard.

"We beat them in the last game, so we know they'll be trying to get their revenge on us.

"So it's the same as always: go there, give 100 per cent and try to come away with the three points."

Curtis Jones interview | 'I want to be counted on, I want to help'