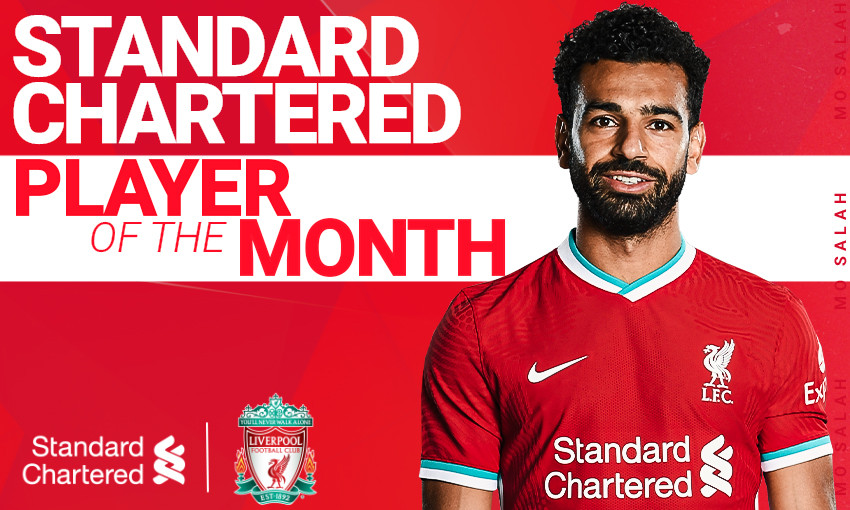 Mohamed Salah was today presented with the Standard Chartered Player of the Month award for December.

The forward saw off competition from Brazil duo Fabinho and Roberto Firmino to clinch the accolade for the first time in 2020-21.

Salah struck six times in eight appearances during December, maintaining his position as Liverpool’s top goalscorer so far this term.

He began the month by netting against Wolverhampton Wanderers at Anfield before nudging in the opener versus FC Midtjylland in Denmark a few days later.

The No.11 then blasted in a penalty to secure a point in a draw at Fulham prior to breaking the deadlock in the top-of-the-table clash with Tottenham Hotspur at Anfield.

And Salah came off the bench to fire twice in the 7-0 rout of Crystal Palace, the second of which was a stunning curling effort from the edge of the area.

Upon being presented with the award, the Egyptian told Liverpoolfc.com: "Thank you very much. It's nice but we just need to win some games from the games coming.

"The situation is not great at the moment but we just need to focus on each game and stay together and carry on.

"I want to thank them [the fans] very much and tell them thank you very much for voting for me. We just need to stay together, supporting the team, and I'm sure everything is going to be fine."