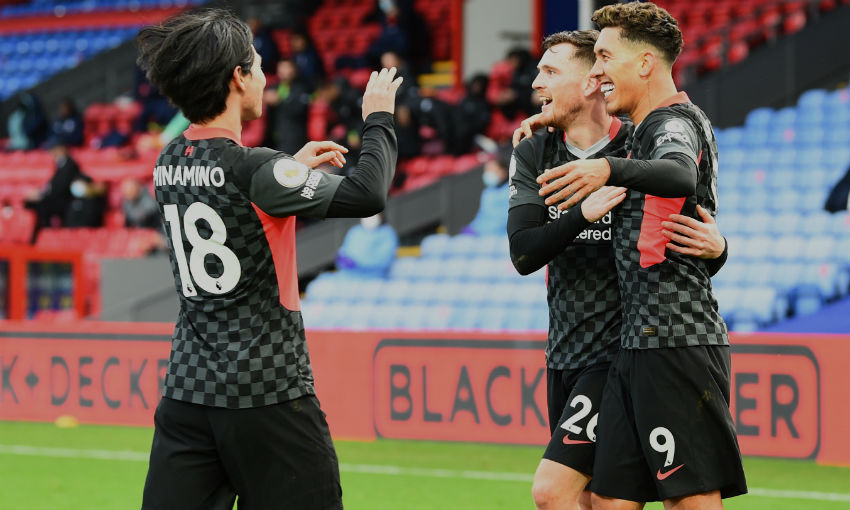 The Premier League champions were at their clinical best at Selhurst Park on Saturday, with fine finishes from Takumi Minamino, Sadio Mane and Roberto Firmino putting them three goals to the good by half-time.

Jordan Henderson added a superb fourth early in the second period, before Firmino got his second of the afternoon with a delicate dink and Mohamed Salah came off the bench to nod in number six and then curl home an unstoppable seventh.

Robertson was unsurprisingly delighted with the Reds’ level of performance in the capital. Read on for a transcript of Liverpoolfc.com’s post-match chat with the left-back…

Robbo, the win takes you six points clear at the top of the table – a perfect start to the weekend…

Yeah, obviously when you go early kick-off on the Saturday and you go first, it only works to your advantage if you pick up the points. Luckily we’ve done that today in a very good fashion. We’ve taken all the chances that were presented to us – seven goals and a clean sheet and the important thing is the three points. Now we can sit back and enjoy the weekend of football knowing that we’ve got our three points in the bag and let’s see what unfolds. But it was as close to a perfect as we can get away from home.

What was the game-plan today? Were those efficient counters a deliberate ploy?

We wanted to be ruthless in everything we did. Crystal Palace had also played Sunday, Wednesday, Saturday and are maybe not as used to it as we are so we wanted to come out of the blocks fast. We wanted to come out full of energy and maybe catch them a wee bit cold and I think we managed that with Taki’s goal. We’re 1-0 up and then we sat back a bit and they got a wee foothold in the game, and we just had to compose ourselves again and Sadio got a great goal. It was just about being ruthless in everything we did, whether it was counter-pressing, defending, taking our chances. We just tried to do it all over the park and luckily for us we took pretty much every chance that fell to us. Some great finishing and we were ruthless at the back as well and starved them of many chances.

It’s a clean sheet too, which is important…

Yeah, the seven goals will obviously be concentrated on but me, Ali, Trent, Fab, Joel, Hendo, everyone, we’re all buzzing because coming away from home - especially Crystal Palace, a really tough place to come - and getting a clean sheet is great. That’s really important but when you score seven goals of course all the frontmen will get the plaudits and rightly so! Like I said, some fantastic goals and probably the best sight of all was to see Ox back on the pitch because he’s been out for the full part of the season and he looked really sharp. So we’ve added an extra body, which is great and we’ve got eight days until the next one so hopefully we might have a couple more back after Christmas.

Describe the third goal for us – it was a brilliant pass from you to set Bobby up. Is that something you work on together in training?

He was the one that switched it to me and I just tried to open up my legs. And to be fair to Sadio, he makes an excellent run which takes the centre-back away and I’ve seen Bobby late. It was a really good ball and Bobby never lets you down with his first touch, or very rarely, and it was a really composed finish. That’s two games on the trot that I’ve assisted him and I’m delighted because I think a lot gets said about Bobby, I think unfairly, so the fact he’s got two in two is amazing and it was a great finish from him. Delighted to contribute towards the goals again but like I said, I’m more delighted with the clean sheet today, that’s for sure.

Bobby back in the goals has its downsides...😩🥋 https://t.co/Ak06vRNQVw

Look, obviously to get that number is incredible. I try my best in everything I do. I try to defend as well as I can but when I get in positions I try to set the forward players up. Me and Trent have got the license to go and you try to provide as best as possible, especially when Bobby’s ran 60 yards – you don’t want him shouting at you! I could have had another one, Sadio could have got another [goal], but I’m happy to contribute and 28 assists I’m obviously delighted with and hopefully there’s many more to come. But more importantly, hopefully there’s many more clean sheets.

You've now got eight days until West Brom visit Anfield. Are you looking forward to having a chance to rest a bit after a hectic period?

We’ve got the longest break of the season until another game so we will get a couple of days off, which is so important. We’ll spend time with the family, spend time with the kids, before Christmas and I’m really looking forward to it. There’s no reason to take them [the days off] off us after that performance so I’m not even giving him [the manager] that option! I’m looking forward to some family time and then we’ll go full-throttle into the 27th. We’re going into the really busy time now and we need to keep the momentum. We need to keep going and try to keep winning games because that’s the only way we’re going to stay top of this league.