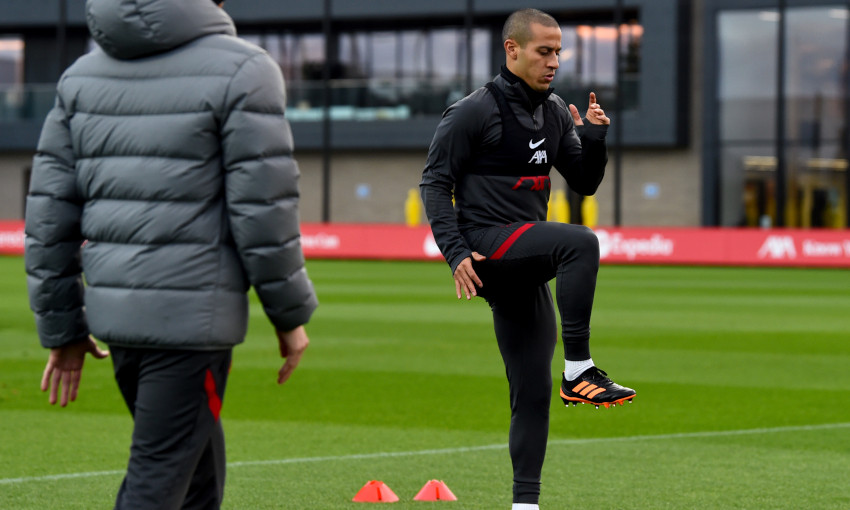 Thiago Alcantara is in a positive mood as he works towards a return to training with his Liverpool teammates in the near future.

The midfielder has been restricted to two appearances since joining the Reds from Bayern Munich in September due to the knee injury he sustained in October’s Merseyside derby.

His recovery continued on Thursday afternoon when he undertook a fitness session in the gym and out on the grass at the AXA Training Centre as part of his recovery.

Thiago, who was one of four members of the squad named in the FIFA FIFPro Men’s World11 for 2020, later provided an update on his condition to Liverpoolfc.com.

Asked about his fitness and whether he is targeting a comeback date, the No.6 replied: “No, just taking it step by step.

“We always try to [do it] like we have a wall in front of us, saying ‘OK, you have to make a step back before you can advance.’

“Now we think we are in a right mood and looking forward to the end of the year to try to train another time with the team.”

Working his way back towards full fitness 👊 💪 @Thiago6 💪 https://t.co/SPYLjNoEd8

When the Spain international does achieve full fitness and rejoin the Reds, he will bolster a group that has overcome a series of injuries to lead the Premier League and successfully reach the Champions League last 16.

“The team were doing good the last years, it’s not just about this season, it’s about the last years – they were doing an amazing performance not just in the Premier League but also in the Champions League,” said Thiago.