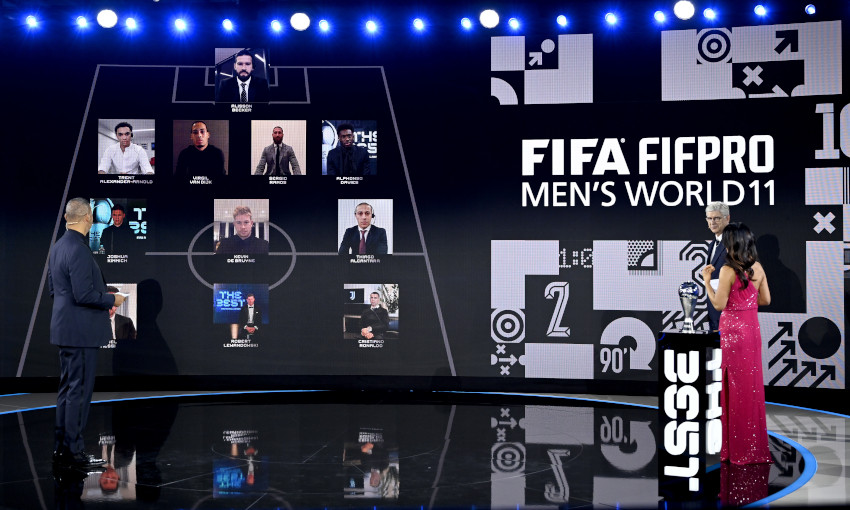 Thiago Alcantara, Trent Alexander-Arnold and Alisson Becker have delivered their reaction to being included in the FIFA FIFPro Men's World11 for 2020.

Liverpool were the club with the most players named in the side, which is decided by the votes of thousands of professional male players around the world.

Alisson was chosen as the team’s goalkeeper, with Alexander-Arnold and Virgil van Dijk in the defence and summer signing Thiago among the midfielders.

Alexander-Arnold, Alisson and Thiago participated in the ceremony via video link at the AXA Training Centre and subsequently spoke to Liverpoolfc.com about their pride at being selected for the World11.

See their reactions below…

“It feels good, to be honest with you. It’s something I’ve obviously always dreamed of and it’s an honour to be in and around the names that are in the team. It’s a proud moment for me. I’ve obviously got to give a lot of thanks to everyone that has helped me along the way, a massive thanks to the staff and my teammates especially – because without them I definitely wouldn’t be where I am.”

“It’s a prestigious award, it’s an honour to be in the team. It’s something not many players have the privilege of saying they have been able to get included in. It’s something I don’t take for granted and I’m obviously thankful for everyone that voted for me. Hopefully I’ll be able to keep up the same form that I did in the last year or two years especially. But the main focus for me is not winning these awards, it’s about winning the big trophies, the ones that put the medals around your neck at the end of the season. That’s what I’m focused on and remain being focused on.”

“We definitely have a lot of players that have missed out, unfortunately. But as a team we’ll be happy for the lads that got in and it’ll maybe serve as motivation for the ones that didn’t. If we can keep doing what we have done over the last two seasons especially and keep up the same levels we have been able to do, then it shouldn’t be a problem for us players and for Liverpool to keep being in and around these award ceremonies. For us, it’s about making sure we’re at the top of our game week in, week out and without even knowing it you’ll be in contention for these types of awards.”

“I feel great being alongside such top players. A little bit surprised, normally I was waiting for [Manuel] Neuer to be there, to be honest, as he won the best goalkeeper of the season. He did really well. But I’m really happy. We had an amazing season, winning the Premier League and the Club World Cup as well, playing really well. So I’m really happy and thankful to be there in the top 11.”

“For what we are doing on the pitch, for how we are playing, you can close your eyes and put 11 players there from our team. We have also top players playing at a good level, a top level, and someone needs to be there. I’m really happy for the other guys who are in the top 11, some others could be there as well. But we just have to keep doing a good job and maybe next time we can put even more players on this list!”

“It’s a big honour and it’s a privilege to be there in the middle of the other 10 players. But this kind of recognition is so huge that you must share it with all the people that are in the background working with you and supporting you all those years. I’m happy with it but I’m more happy when it comes as a collective prize, for sure.”

“[2019-20] definitely was [my best] because in terms of collectively winning titles, it was the best one and I felt the best level of football I’ve played. It’s just a recognition that you are doing good things. It’s a beautiful recognition for last year but at the end, we live in the present and we want to play and we want to enjoy football and enjoy it with the guys as well. I’m looking forward. It was not the best start that I wished and expected [since joining Liverpool] but we only think about the next thing and the next thing, so I’m looking forward to the next thing as well.”