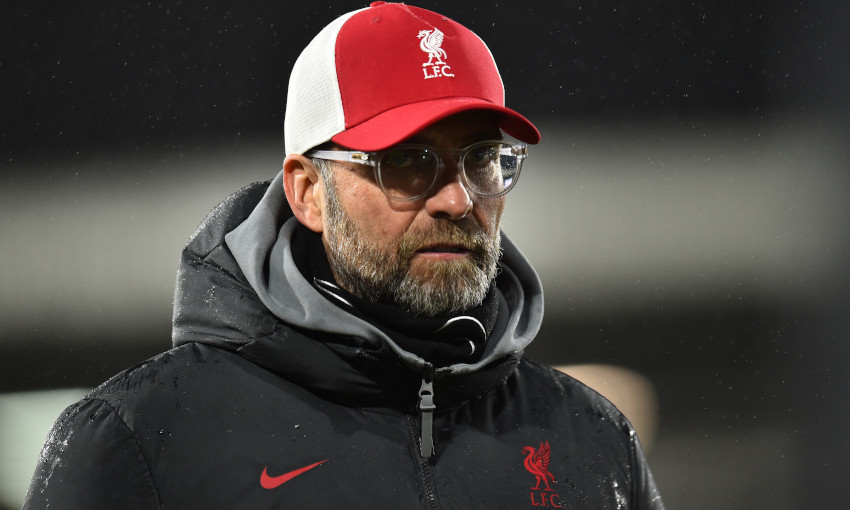 Jürgen Klopp acknowledged Liverpool's disappointment at their start to Sunday's 1-1 draw with Fulham, but felt they could have left Craven Cottage with a victory because of their efforts in the second half.

The Reds needed Mohamed Salah’s 79th-minute penalty to claim a point in London after they’d fallen behind to a spectacular opener from Bobby De Cordova-Reid in the first period.

The hosts were good value for their lead and created several openings before the interval; however, the champions asserted themselves on the contest after the break and duly drew level from the spot after Georginio Wijnaldum’s free-kick had been handled by Aboubakar Kamara in the wall.

Offering his assessment, Klopp felt half-time allowed Liverpool to address some of the issues from the opening half and impose themselves on proceedings.

He told his post-match press conference: “I am not frustrated anymore about that [Liverpool’s start], but you are right: it took us half an hour to get going and that of course makes the game more difficult.

“It was the first time supporters were here for a long, long time and obviously [they] created an atmosphere. We helped Fulham a lot to create that atmosphere, actually. They obviously played differently to the way they usually play; a lot of direct balls, Loftus-Cheek second ball, high ball fight and these kind of things. A lot of free-kicks – I think there were a lot of set-pieces in the first half.

“That’s how it is. With the ball I didn’t like our game, but there was a lot of loud shouting from outside from all the coaches, so we could solve that a little bit in the first half – like for 15 minutes – but then half-time helped massively and the second half was much better.

“I think in the first half an hour we could have lost the game, in the last 60 minutes we should have won it. In the end we get a point and that’s it.”

We weren’t up to our standards first 30 minutes and that cost us in the end. Good response from the lads and need t… https://t.co/I7NGqlPI3F

Alisson Becker returned to Liverpool’s starting line-up after recovering from the hamstring injury that had ruled him out of the previous three fixtures.

The goalkeeper was called into action on a handful of occasions in the first half, needing to thwart good Fulham openings to deny them a bigger advantage at the break.

“You could see in one or two situations that he needs rhythm too, but in the key moments he was there,” Klopp said of his No.1.

“Sensational saves, obviously, but the goalkeeper on the other side had a pretty important job to do as well.”

Liverpool needed to make a change during the half-time break in London, with a back spasm forcing Joel Matip from the field.

Klopp is hopeful the centre-back will be fit for Wednesday’s visit of Tottenham Hotspur to Anfield, but is confident they can find a solution if necessary.

The boss stated: “We are not struggling with numbers in the centre-back positions. We have some, they are just getting younger and younger – [but] we still have centre-backs. Today we brought Hendo into that position.

“The situation is like it is; I actually hope Joel will be fine but I don’t know. Then we have to find a solution, that’s how a football season is.”