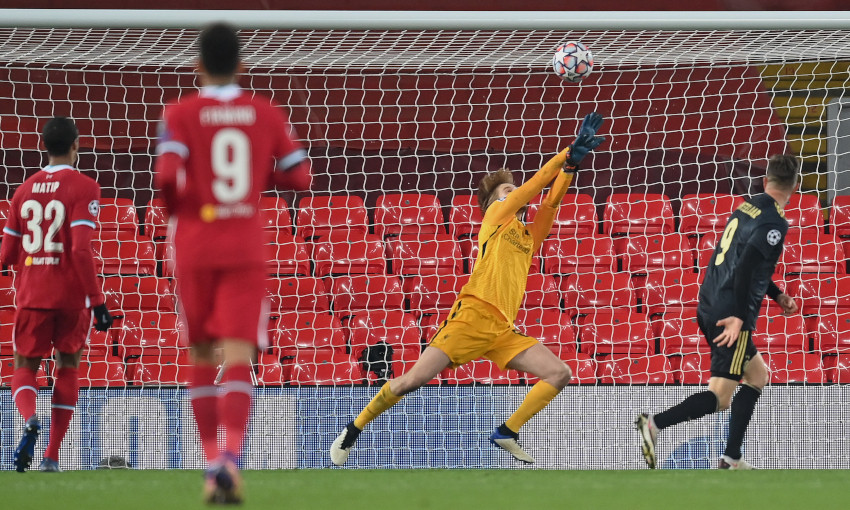 Liverpool booked a place in the Champions League last 16 with a second 1-0 win over AFC Ajax in Group D.

Curtis Jones’ second-half effort separated the teams at Anfield on Tuesday night in only their fourth competitive clash of all time.

And the result meant the Reds cannot be caught at the top of the section and qualify as group winners with one game left to play.

Here are five talking points from the victory against the Dutch side...

Long a part of the set-up under Jürgen Klopp, he actually collected a Champions League winner’s medal as a member of the squad in Madrid 18 months before his European opportunity arrived against Ajax.

The Cork-born stopper was entrusted to take a leap onto a much bigger stage when Alisson Becker missed the Group D contest due to a hamstring injury.

But you could never have guessed the game was Kelleher’s Champions League debut given his performance on the evening – punctuated by calmness, composure and one especially crucial save.

With the Reds’ lead still a vulnerable 1-0 in the 88th minute, Klaas-Jan Huntelaar looked a certain scorer when picked out in the middle of the box for a close-range header.

Kelleher, however, produced a point-blank reaction stop to not only deny the striker but push the ball safely over the crossbar, quashing Ajax’s late quest for an equaliser.

He made four saves in total to help Liverpool register a fourth clean sheet in the competition this term and the third in his five outings for the club.

That Klopp made a beeline to Kelleher with a beaming smile immediately after the full-time whistle encapsulated the impressive nature of the Irishman’s Champions League bow.

“Top. Top, top, top,” said the boss of his goalkeeper post-match. “I am pretty sure he will either sleep really well tonight or not at all, but he will enjoy both.”

A winner made in Kirkby

Having been used only as a substitute against Brighton & Hove Albion last weekend following a minor fitness complaint, Jones was brought back into the XI against Ajax and bagged his first Champions League goal.

The 58th-minute winner was created by fellow Academy graduate Neco Williams, whose deep cross from the right flank was misjudged in flight by Ajax goalkeeper Andre Onana and deftly cushioned into the open net by Jones.

It was the midfielder’s sixth strike at senior level – at a rate of one every four games – and the highlight of another eye-catching performance by the Scouser, who has started eight of Liverpool’s 18 fixtures this season and been in the squad on every matchday.

At 19 years and 306 days old, he became the third-youngest player to score for the club in the competition, after David Ngog and Trent Alexander-Arnold.

Williams’ assist, meanwhile, was the most important contribution of his own assured display as the Wales international showed confidence on the ball and defensive diligence to stifle Ajax’s attacking threats.

The pair of products from the Reds’ youth base in Kirkby made history on the night, too: it was the first time two teenagers have combined for a Champions League strike for Liverpool. 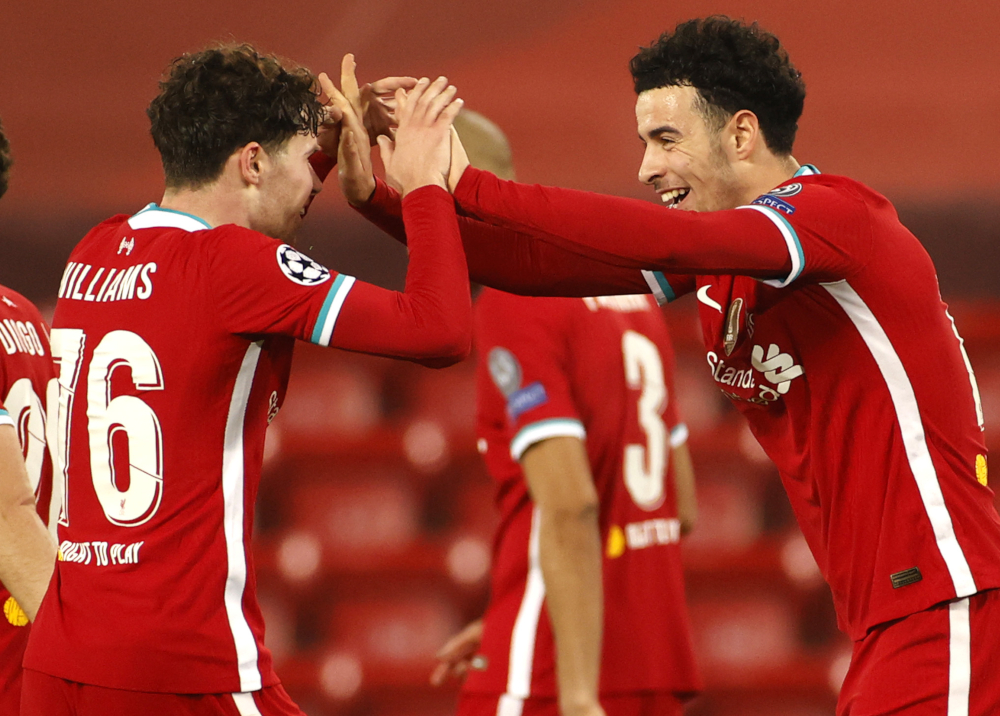 Jordan Henderson returned to the starting XI for the first time since the Premier League meeting with Manchester City on November 8 and his vocal influence on the team could literally be heard.

Henderson does as he asks as well – the No.14 led the side’s tallies for key passes (three), passes in the opposition half (30), crosses (four) and possession gains (seven).

“No matter what 11 or 14, 15 or whatever it is that manages to play in the game, they give absolutely everything,” he explained after the final whistle.

“We’ve got some fantastic players, especially the young players tonight who again showed the quality to get us the three points.

A game to spare

Klopp has guided his side into the Champions League knockout stages for the fourth consecutive campaign.

The difference this year? There’ll be no nails bitten before and on matchday six as the job is now done and dusted ahead of Liverpool’s final fixture of this phase, the trip to FC Midtjylland next Wednesday.

The Reds had previously left it until the last, requiring positive results against Spartak Moscow, Napoli and Salzburg in the final group games of the three preceding seasons.

But this time around they can enjoy a tension-free journey to Denmark and perhaps an opportunity for the boss to rest and rotate players as Liverpool continue to defend their Premier League title.

Wolverhampton Wanderers visit Anfield and Klopp’s men travel to Fulham either side of their clash with Midtjylland.

The 1-1 draw between Atalanta BC and Midtjylland in Bergamo on Tuesday night meant Liverpool’s win not only ensured a place in the knockout rounds but clinched top spot in Group D.

The Reds therefore know they’ll be paired with a runner-up from one of the other seven groups in the last 16, when the draw takes place on Monday December 14.

It also means Klopp’s men will play the second leg of their knockout tie at Anfield, with those matches pencilled in for February 15/16 and March 16/17.

FC Porto are already confirmed as one of up to seven potential opponents for Liverpool, who will not be able to draw the runners-up in Group D or a fellow English club.